Silvestre de Sousa back on board after steering Flotus to victory on debut at Goodwood but losing subsequent rides to Frankie Dettori and James Doyle; Simon and Ed Crisford's filly now 8-1 for the Cheveley Park Stakes at Newmarket 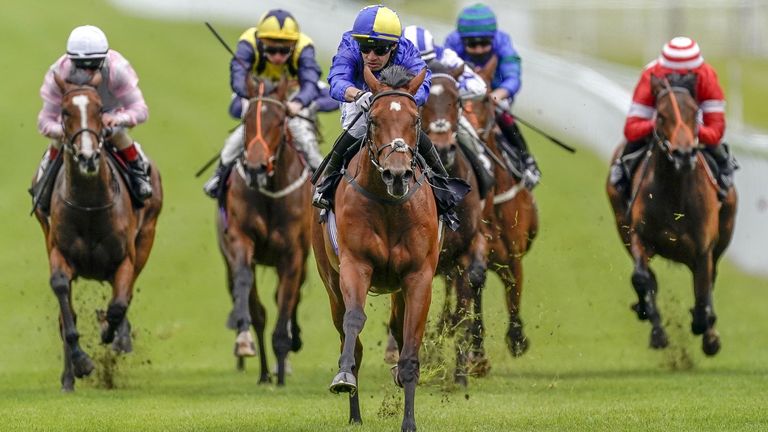 Silvestre de Sousa was delighted to get another chance to ride Ripon winner Flotus, having missed out to Frankie Dettori and James Doyle since her debut

Joint-trainers Simon and Ed Crisford were winning the Bank Holiday feature at the North Yorkshire course for the second year in succession - while Silvestre de Sousa was back on board for the first time since Flotus was an equally emphatic winner on her debut at Goodwood in May.

The daughter of Starspangledbanner had been partnered by Frankie Dettori and then James Doyle in the intervening months, but finished well beaten on all three starts at up to Group Two company.

De Sousa tracked across from an awkward draw in stall two this time, claiming the stands rail and forging ever further clear to win at 6-1 - by four and a half lengths from the consistent Hellomydarlin.

After her second career victory, Flotus was halved in price by Betfair into 8-1 for the Juddmonte Cheveley Park Stakes over this same six-furlong trip at Newmarket at the end of next month

The key, De Sousa suspects, is to allow her to have her own way and demonstrate her natural speed throughout.

"I think perhaps they've probably been trying to ride a race on her, and she's very 'on' and [just] wants to get on with the job," he told Sky Sports Racing.

"I think it maybe suits her to not complicate things. I just let her be where she wanted to be.

"She's a really talented filly, and when I won on her first time I really liked her. But, not every story is a fairytale - so I lost the ride."

De Sousa was understandably all smiles after renewing the partnership successfully, and extending his 100 per cent record on Flotus.

"I'm glad I'm back on her," he added. "She's a typical sprinter, just likes to get on with the job, and I didn't complicate things today.

"Drawn two is never ideal [here], especially with speedy horses on your left. But she jumped smart, she travelled and she quickened [again] when I wanted her to. From halfway, I thought I was the winner."