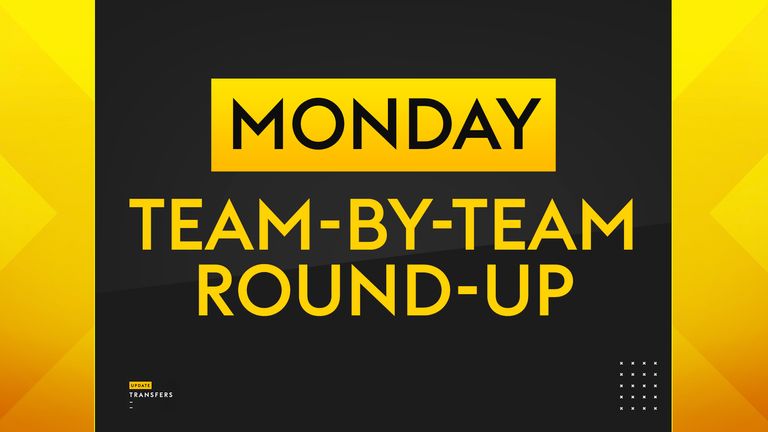 Arsenal could seek a short-term loan for Real Madrid striker Luka Jovic if they cannot persuade Dusan Vlahovic to join them this month.

Everton managerial target Vitor Pereira is flying to the UK on Tuesday to continue advanced talks with the club.

Leeds are investigating after Newcastle fans reported a 'crush' getting into Elland Road on Saturday.

Chelsea have been ordered to expand their away dressing room following a complaint by Premier League rivals.

John Terry was spotted working with Chelsea's U23 side for the first time on Monday evening ahead of their clash with Manchester City.

Newcastle are willing to pay almost £500,000 a week to land Jesse Lingard on loan from Manchester United.

Niklas Sule has told Bayern Munich he wishes to leave at the end of the season on a free transfer, German reports claim.

Ligue 1 side Nice are the latest club to join the race to sign Manchester United man Jesse Lingard, according to reports.

Everton have pulled back from the imminent appointment of Vitor Pereira, with owner Farhad Moshiri persuaded not to make another knee-jerk managerial decision.

Arsenal's hopes of signing Dusan Vlahovic could be hanging on what happens with Aaron Ramsey at Juventus.

Newcastle have stepped up their pursuit of Jesse Lingard.

Manchester City are closing in on the signing of River Plate striker Julian Alvarez.

Panicked Premier League players are hiring former SAS soldiers to protect their families at home while they are in action for their clubs.

Urgent meetings will take place this week amid fears over worsening fan behaviour in English football.

Young football fans are indulging in a post-Covid carnival that has seen the number of football-related arrests rocket by almost 50 per cent this season.

Tottenham have enquired about Fiorentina midfielder Sofyan Amrabat, while talks are ongoing with Wolves for Adama Traore.

Real Madrid forward Karim Benzema was the victim of a robbery while he was playing for the Spanish giants on Sunday.

West Ham will have to make a permanent move in order to sign Marseille defender Duje Caleta-Car this month.

Manchester United and Liverpool are unlikely to follow up their interest in Denis Zakaria this month.

Unrelenting abuse of referees is having a devastating impact on officials, including teenage refs, who are leaving the game in droves.

Liverpool have reportedly held preliminary talks with PSV Eindhoven winger Cody Gakpo, who is also said to be a target for Manchester City.

Manchester United will accept a fee as low as £13m in order to let Alex Telles leave the club, a surprising report has claimed.

The Saudi Arabian owners of Newcastle United have ambitions to make the club the focal point of a global sports and football portfolio.

Tottenham have edged closer to striking a £20m deal for Adama Traore, who would be Antonio Conte's first signing since taking charge.

The Premier League will hold urgent talks with police chiefs and other football authorities this week after a spate of incidents involving crowd disorder.

The Australian Open tournament director has said that Novak Djokovic is "welcome back" to Melbourne Park next year, despite regrets that the visa issues surrounding the unvaccinated Serb had overshadowed the build-up to the event.

Rangers are close to agreeing a new deal with Jon McLaughlin and also want to tie down teenage sensation Alex Lowry on an improved contract.

Celtic are hopeful Callum McGregor's facial injury may not be as bad as first feared.

Barry Ferguson has blasted Giorgos Giakoumakis after the Greek claimed his 'dangerous' Alloa players tried to boot Celtic out of the Scottish Cup.

Celtic new boy Matt O'Riley once had his wages slashed by a fifth to join MK Dons while Borussia Dortmund and Chelsea chased him, according to Swansea boss Russell Martin.

Robbie Neilson says Hearts are right to slash Old Firm tickets for Tynecastle - and wants them to keep doing it.