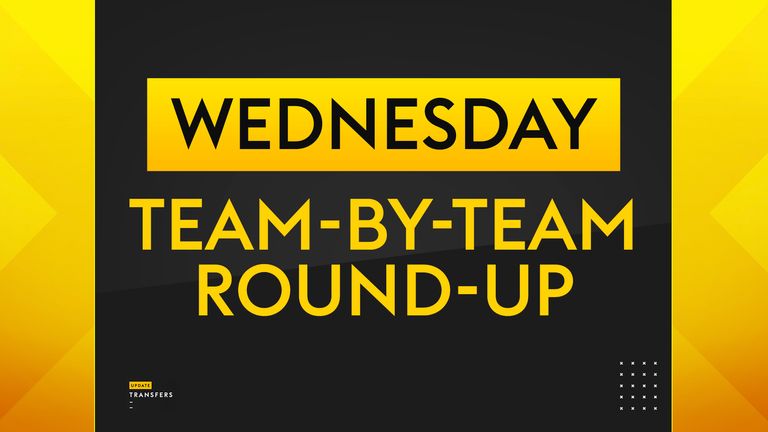 Tottenham are exploring a possible swap deal with AS Roma which would see Tanguy Ndombele move to Serie A in exchange for Jordan Veretout.

Marco Silva has told Fulham teenage hotshot Fabio Carvalho to keep his feet on the ground and not jump too soon in his bid to boost his career amid January transfer window interest from Liverpool.

Zinedine Zidane is ready to say yes to becoming Paris Saint-Germain's next manager, allowing Mauricio Pochettino to take over at Manchester United in the summer.

Barcelona are showing interest in Manchester United full-back Alex Telles, who has never been able to secure a long run in the first-team at Old Trafford.

Atletico Madrid are unwilling to sanction a move back to the Premier League for Luis Suarez even if there was interest from a club.

Mikael Silvestre does not believe former team-mate Wayne Rooney is ready for the pressure of a Premier League management job at his boyhood club Everton.

Aaron Ramsey is reported to have upset his Juventus employers by rejecting the chance of a loan move to big-spending Newcastle as well as two other Premier League clubs.

Nottingham Forest midfielder Joao Carvalho is closing on a move to Greek side Olympiakos.

Chesterfield striker Kabongo Tshimanga is attracting interest from a Premier League and a host of Championship sides.

Super-agent Jorge Mendes wanted Joao Felix to join Manchester City before he moved to Atletico Madrid for £113m in 2019.

Manchester United have rebuffed an approach from Newcastle United to take Jesse Lingard on loan for the remainder of the season.

Watford have joined the race for Scotland Under-21 full-back Calvin Ramsay following the teenager's breakthrough at Aberdeen.

D'Margio Wright-Phillips is in talks over a new contract at Stoke City after his recent appearances for the first team.

Thierry Henry is likely to be a candidate to take over as manager of Bordeaux if the Ligue 1 club decide to part company with under-fire Vladimir Petkovic.

Ousmane Dembele has been told he has only two options remaining at Barcelona - renew his contract or leave in January.

Super-agent Jorge Mendes is reported to be furious that he did not receive what he feels was the full fee he should have from the deal which sent Ruben Dias to Manchester City.

Arsenal believe a loan deal to sign Lyon midfielder Bruno Guimaraes will prove too expensive to complete this month.

Manchester United are embroiled in a ticket row with fierce rivals Leeds United after being offered fewer than their regular allocation of away tickets for the Elland Road clash on February 20.

Burnley's owners have delayed making payments owed to former directors which are required to complete their takeover, raising new fears about the club's financial position.

Chelsea are showing interest in a third Barcelona player, with midfielder Gavi joining Frenkie De Jong and Sergino Dest on their list of potential targets.

Liverpool are set to recall Rhys Williams from his loan at Swansea in a move that could pave the way for Nat Phillips to leave Anfield on a permanent deal.

Chelsea defender Cesar Azpilicueta wants to end his career at Stamford Bridge but is yet to be offered terms beyond the end of the season.

Newcastle United are stepping up their efforts to sign Bayer Leverkusen left-back Mitchel Bakker after making an offer of around £14.5m.

Derby are resigned to losing top prospects Jason Knight and Max Bird this month unless they can find a route out of the crisis threatening their existence.

Novak Djokovic could face a ban from locker rooms and other on-site facilities while unvaccinated, even if he manages to continue entering certain tournaments.

Newcastle are prepared to pay Manchester United £2m to sign Jesse Lingard on loan for the remainder of his expiring contract.

The Football Association is set to end any thoughts of a bid for the 2030 World Cup and concentrate fully on hosting the 2028 European Championships alongside the Republic of Ireland.

Owen Farrell is not certain to play a match before joining England's Six Nations squad on Monday, with his scheduled appearance against London Irish this weekend now in doubt.

The Italian national anti-doping agency is to start an investigation into the allegations that forced the Olympic 100m champion Marcell Jacobs to split from his nutritionist before the Tokyo Games.

Researchers have claimed that more than two-thirds of male football fans harbour hostile, sexist or misogynistic attitudes towards women's sport.

Shabab Al Ahli have put a £3.5m price tag on Iran forward Mehdi Ghayedi, who has been linked with a move to Celtic.

Defender Jack Gurr has left Aberdeen after only five months and is heading back to the United States.

Celtic have thwarted a bid by West Brom to hijack their £1.5m swoop for Matt O'Riley.

Jack Ross has revealed he felt an agonising sense of injustice at being sacked by Hibs last month after two years in charge.