"It's tough to hear [owners' statement] because we did during Covid take a wage cut. It was forced upon us and then later on we decided to continue it for the betterment of the club. There's been anger and detest towards them for standing by and letting this happen" - Joe Batley 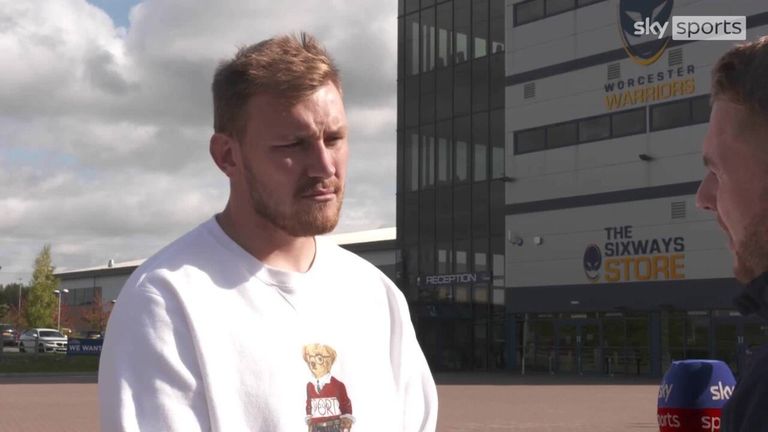 Former Worcester Warriors forward Joe Batley has hit back at the club's owners, claiming the players did take a wage cut and admitting 'huge anger and detest' at them for the situation that has unfolded.

WRFC Players Ltd - the company which holds the contracts of Worcester's players and some staff - was liquidated in the High Court on Wednesday with all player employment immediately terminated.

The Rugby Football Union confirmed on Thursday evening that the Warriors would be suspended for the rest of the Premiership season and relegated from the top flight.

Owners Colin Goldring and Jason Whittingham issued a statement last Friday, claiming "some players would not accept any pay cut at all despite our openness at the financial impact this would have on the club," while also criticising the club's supporters.

Batley - speaking to Sky Sports on Thursday outside Sixways, hours before his return to Bristol Bears was announced - refuted the claims and admitted to feeling upset, let down, and a high degree of anger.

"I've got no real feelings towards them [Worcester owners] now. There's been anger and detest towards them for standing by and letting this happen," Batley said.

"I don't know what their game-plan was in the long term. The more you look into it, the more sinister it seems. I'm not assuming too much, but upset and let down is how I feel in this situation, and they are the brunt of it.

"It's tough to hear [owners' statement] because we did during Covid take a wage cut. It was forced upon us and then later on we decided to continue it for the betterment of the club.

"For them then to hit out at the fans afterwards is a very odd move. Very loyal, passionate fans, through losses and wins have stuck by us. To hit out against them is odd and to come at us as well, who for the last two months have done nothing but try to keep the games going at Sixways.

"Obviously they have their own agenda, and that's up to them. But it was not welcomed by us, the playing group."

Prior to speaking to Sky Sports, Batley had been in to clear his possessions out of the dressing room at Worcester. He said it was an emotional time and labelled the loss of the club 'unbearable'.

"Yeah, it's hugely [emotional]. I was looking forward to another season at the club and for it to be cut short in only October is tough.

"We were building something here, there was a definite positive feeling around the place, so for it to be cut short not because of what we've done on the pitch but off it, is very tough to take.

"It's tough because everyone wished for it to go well, and I truly feel for the fans. The fan within me, I can't imagine being a 10-year-old boy back home in Portsmouth losing my home club.

"On a grand scale, the amount of supporters and people losing a team in the Premiership is unbearable."

Staff at Worcester went unpaid for September and received just 65 per cent of their salaries for August, with Batley paying tribute to them.

"Not only are they good workers but they're great people. Everyone has stuck together, and wished and willed it to work, not only for the club but for each other.

"The fact this has happened to them is tough, because they paid the ultimate sacrifice in August, getting paid only 65 per cent. They are never going to see the rest of that money, or indeed September's money.

"They put a personal sacrifice for the better of the club, and unfortunately the club isn't going to pan out how we wanted.

"The salary cap in the Premiership decreased, which put a lot of players out of contracts last season. To now throw another 40-odd players into that, is a tough situation.

"This is probably a big wake-up call in terms of the sustainability of rugby union. It's an amazing sport, and I think Covid probably accelerated this. I'm not too sure what the solution is."