Paris will be fraught with tension and significance for some England players, says Stuart Barnes

Stuart Barnes looks back on a weekend of World Cup warm-ups, and says Paris will be a tense and significant affair...

The rugby world - if not exactly turned upside down - was tilting in an unusual direction at Twickenham. A powerful France pack was nothing unusual but an utterly dominant one against the normally efficient England eight was not something rugby supporters are used to seeing.

But the real revelation was the fact that the England backs won the game. Backs, despite the cliché, can do more than decide by how many points. The back three were brilliant in their contrasting ways.

There was pace, fancy footwork, fabulous finishing and sharp defending from Jonny May and Anthony Watson on the wing, while Alex Goode thinks a few seconds ahead of most players on the field.

All three must have sealed their places in the 31 and the trio have advanced their claims to start. Mike Brown must prove his concussion injuries are in the past and generate an ability to decision-make alongside George Ford in Paris. 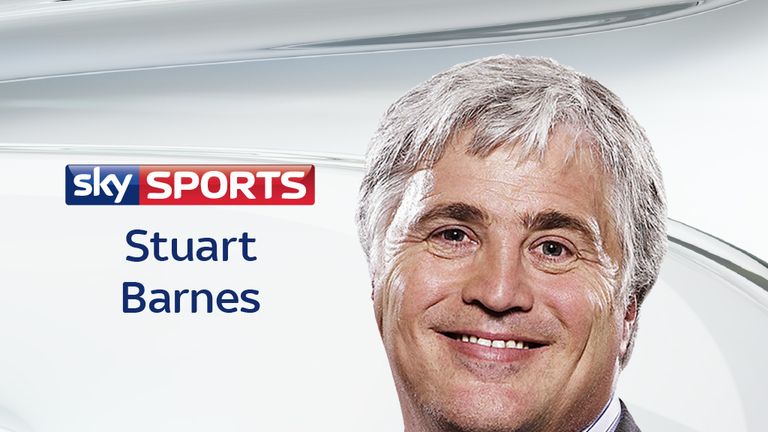 It was an exciting start for England in some ways, a worrying one in others. Paris will be an evening fraught with tension and significance for a lot of people on Saturday.

In the centre, the selection process tightened. Sam Burgess did a decent job overall; he did a superb one in defence but this was not a career-changing effort.

It was one that makes you think if the management were prepared to name him in the initial squad with little to no justification beyond blind faith, they must surely have another look before jettisoning him.

Henry Slade was widely thought to be among the outsiders for a place in the 2015 party but his rugby vision, maturity and distribution skills from outside centre, where he has played all his best rugby to date, may force a rethink.

This match was not particularly pleasant viewing for either Billy Twelvetrees, or even Luther Burrell, the Saint who is widely expected to be named in the 31 but perhaps now vulnerable to a poor performance in Paris.

At half-back, Owen Farrell kicked his goals, was solidity itself in defence without offering too much in attack, but he is both assured and certain of selection. Richard Wigglesworth ran the show competently from scrum half. Danny Care did not press his case to leapfrog the Saracen when he came off the bench.

This weekend I would like to see Ben Youngs start, with Care getting plenty of time from the bench. The decision to bring on brains and a boot or a livewire with the ability to inject extra pace is a big one.

Early days but on the evidence of the first warm-up game there is more concern in terms of the forwards selection. This was a poor effort. There is no cause for panic as France were much nearer full strength in the front five than England but still, many of these players will have vital roles as back-up and bench men.

It was not a great day for the captain, Tom Wood. His decision-making was flawed under pressure, as he showed when deciding not to kick for goal when the score was 19-14 to close the game out. Yet what was Farrell with all his experience doing not screaming at him to change his mind?

We are always told the captain is just one among many leaders. Well, when it mattered Saturday there were none. England must not be this naive again in 2015.

James Haskell has it in him to keep the blindside shirt if he can only maintain his discipline. England do not have a host of ball carriers up front and Haskell gives them direction and breakdown skills - another worrying area against France.

Ben Morgan was depowered but his assignment was to get 40 minutes under his belt. He managed that.

Where England did not manage at all was in the hooking department. The decision to drop Dylan Hartley looks bold in extremis after both Rob Webber and Luke Cowan Dickie failed to convince. In the case of the latter, the management may have been taught a salutary lesson.

Training is no substitute for the pressure of playing and, well as some players look in training, this is no reason to opt for them over rivals with the form in the book where it counts, on the field.

Jamie George of Saracens has to come into contention after Twickenham. Currently England have a fine all-round footballer as first choice in Tom Youngs but he has a CV of struggling with his throwing.

Neither of Saturday’s duo did enough to suggest they could handle the big occasion. George has a huge chance. There is one other option but there’s about as much chance of seeing Steffon Armitage in the squad as the return of you know who from his disciplinary-reasoned exile.

David Wilson had a worrying experience off the bench and looked vulnerable to Kieran Brookes until Brookes was taken off with what looked a nasty wrist injury. On the credit side up front, while Mako Vunipola struggled at times in the set piece, his sensational work in the loose makes him an excellent option to bring from the bench in the final quarter.

It was an exciting start for England in some ways, a worrying one in others. Paris will be an evening fraught with tension and significance for a lot of people on Saturday.

Elsewhere, Scotland are being lauded in some quarters for an improved performance in Ireland but this was a sixth straight defeat. They had better beat Italy when they meet them home and away. The confidence of winning is crucial.

Ireland has that, although not the right quality of performance. Eoin Reddan took a step clear of Isaac Boss while Ian Madigan showed he can bring many qualities to the 10 shirt - but can he deliver the control Paddy Jackson offers as Johnny Sexton’s back-up?

Apart from the result, Sean O’Brien at the breakdown and Simon Zebo at full-back offered more good news as they and England build towards their match-up ahead of the tournament. There will be no prizes for the winner that day but nevertheless it looks a significant game.

Get ready for the Rugby World Cup. Watch France v England for £6.99 on NOW TV. No contract.