South Africa flanker Pieter-Steph du Toit has been named World Rugby's Player of the Year as the World Cup champions sealed a trio of honours at the World Rugby Awards in Tokyo.

Du Toit becomes the third South African to win the award after Schalk Burger in 2004 and Bryan Habana in 2007, when the Springboks won the second of their three World Cup crowns.

Rassie Erasmus, who will step down as South Africa's head coach to return to his role as the country's director of rugby, was recognised for masterminding their World Cup triumph with coach of the year.

Erasmus, who also led them to a first Rugby Championship win since 2009, only lost one match in charge of the Springboks in 2019 - their pool-stage defeat against New Zealand. 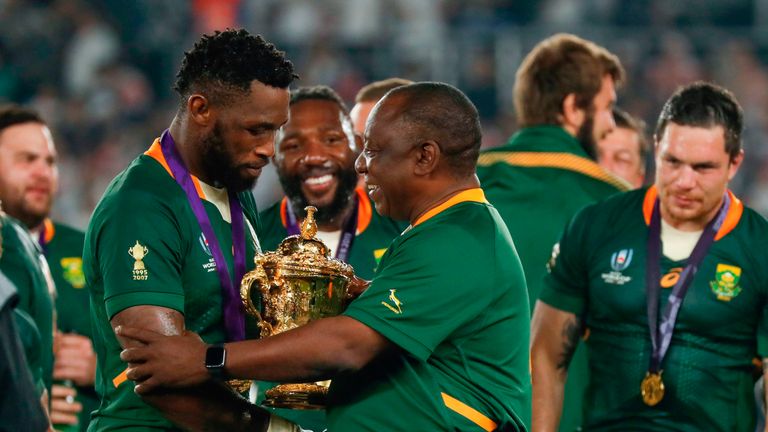 Meanwhile, England centre Emily Scarratt was named women's player of the year as she saw off the challenge of England colleagues Sarah Bern and Katy Daley-McLean, while France's Pauline Bourdon and New Zealand's Kendra Cocksedge were also nominated.

"It's mad," Scarratt said. "At the start of the season, I was still playing sevens, so I have come back to 15s and got my teeth back into it.

"There are some massively exciting times ahead, a big two years. There is lots of rugby to play, and we want to use the next two years as best we can.

England wing Joe Cokanasiga missed out on the breakthrough player title as the Bath player lost out to France international Romain Ntamack, with Herschel Jantjies of South Africa the other nominee.

England's Wayne Barnes, who officiated the third-place play-off between New Zealand and Wales, won the referee category ahead of his retirement.

Try of the year went to New Zealand scrum-half TJ Perenara following a stunning score in the World Cup pool game against Namibia.