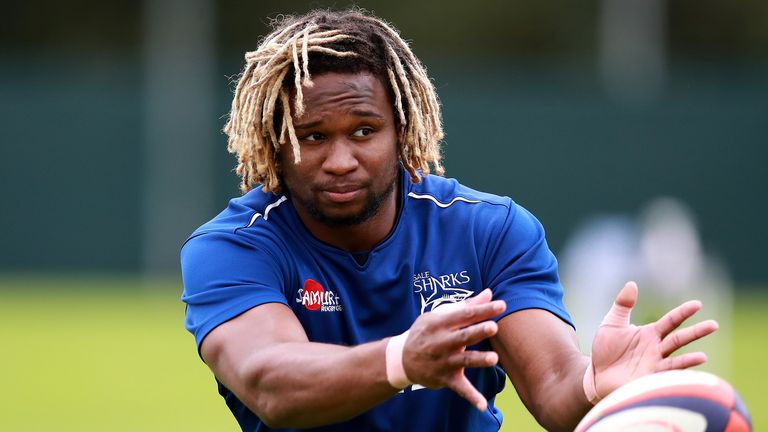 Marland Yarde put out a strongly-worded tweet a month ago condemning the treatment of some of his South African team-mates at Sale who had received death threats after choosing not to take the knee in support of the Black Lives Matter movement.

It made a few headlines for a couple of weeks, and in the past that might have been the end of the story. But not anymore. Not after watching George Floyd's killing.

The impact on Yarde was huge - it took him two to three months to be able to sit through the video, and when he did there was a mixture of horror and grief. He says it was "devastating to see" and "it is time for change for people to put their hands up and stick up for their rights", which is why he felt the need to tell his story.

Floyd's death and the reaction worldwide that followed created discussions and the conversations are becoming a little bit less uncomfortable, says Yarde.

"Being a black person I think it is difficult for me to speak to other people about racism," he tells Sky Sports News. "I have experienced it in the past and a lot of times it comes across like you are victimising yourself, which is far from the truth."

As a kid born in Saint Lucia growing up in Croydon, Yarde experienced racism and he worked out pretty quickly he needed to develop a very thick skin. A scholarship gave him the opportunity to play rugby, which he says would never have happened otherwise.

He made his mark at London Irish and in 2013 he was called up to play for England on their tour of Argentina. He made his debut in the second Test, it was meant to be one of the proudest days of his life but the memories aren't fond ones.

"I was racially abused on the pitch and also on Twitter after the game, which I retweeted but was told to take it down. I felt a need to show people what was going on," he says.

Others it seemed didn't. It wasn't a one-off incident. Earlier this season the Sale winger claimed he was racially abused by a spectator during a Premiership game. He doesn't want to name the club where the incident took place.

"I spoke to my physio and said 'did you hear that?' and one of my team-mates heard it, I complained to my media manager, it was reviewed by the league and nothing came from it," he says. "It was why I was reluctant to say anything from the start because I believed nothing was ever going to happen anyway.

"The only thing I had was a couple of emails saying that they listened to the tapes and nothing was heard and there was no reaction on the field. It was like I wasn't telling the truth, I am sure that's not what they thought but I don't think enough was done to highlight the matter."

The thick skin was deployed yet again, but he says that "the shame of it is that it didn't surprise me".

In light of what has gone on in the last few months with athletes using their platform to stand up for what is right, Yarde wished he had pushed harder for answers. He admits he was ignorant for too long but he's now at an age where he has a clear understanding about what he wants out of life.

"Now I have a child I think about the next generation and how it impacts them, I want to try to do the best I can as a person for equal rights for people around the world to be treated the same," he says. "I think everyone is putting a piece in the jigsaw and that's going to help reinforce that over a period of time."

With that in mind, what would he have said to that spectator given the chance?

"I would say they need to think about what they are saying, some people live in such a closed-world bubble they don't realise the impact it has on someone.

Some of his team-mates did not want to take the knee upon rugby's restart and were allegedly sent death threats, so he felt compelled to tweet.

He felt obliged to say something.

"It was mainly coming from the South African players, I could share a story - Lood de Jager has adopted a black child and he hasn't taken a knee, so does that make him a racist? No, it doesn't, it's just purely on the gesture.

"As a group we showed unity and support in our own way. Death threats will not make the world a better place," he added.

What Yarde wants to know now is what is next. Are the players still going to be taking the knee in two, three, four months or a year's time? What plans are in place for the future to enforce change? How will the sport keep pushing the diversity and inclusion agenda?

Yarde says what they need to do is tap into real-life experiences, talk to people like him and listen. Find out how racism makes people really feel. Why - he says - does the sport have educational meetings for doping and gambling but not racism or culture?

Yarde is prepared to use his platform and make himself heard - he knows he might never have had this opportunity if there hadn't been a scholarship at a private school. That's the problem and the major issue for rugby, and he accepts that's why the sport will struggle to be truly diverse because accessibility is key and at the very grassroots level the chances he says still just aren't there.

A Premiership Rugby spokesperson said: "We take all allegations of racial abuse very seriously and won't tolerate its presence within the game.

"Marland's allegation was investigated, and although video evidence was studied no racist language could be identified. We explained that to Marland, via the Rugby Players Association."

Argentine Rugby Union president Marcelo Rodriguez told Sky Sports News that the incident in 2013 was not brought to the governing body's attention but apologised for any offence caused.

"From the Argentine Rugby Union we were not aware of the fact and if this happened, we apologise on behalf of the team and repudiate any act of discrimination that happens inside and outside the pitch," Rodriguez told Sky Sports News.

"A proof of our commitment to respect diversity and non-discrimination is that we implemented the 'Rugby 2030' program that seeks to resolve conflict in all its aspects and has a specific program to work with discriminatory stereotypes. We have achieved good results."