Trailfinders Challenge Cup: Ben Ward and Ealing on the trail of Saracens in first competitive game of 2021

Ealing Trailfinders director of rugby Ben Ward speaks to Sky Sports ahead of his side facing Saracens, who begin life following their enforced relegation from the Premiership with a Trailfinders Challenge Cup clash on Saturday

It will be quite the match-up at Vallis Way on Saturday afternoon: The fallen giants of English and, indeed, European rugby union up against one of the most ambitious, up-and-coming clubs outside of the Gallagher Premiership.

It is an encounter which has generated plenty of interest too - and not only because this weekend's scheduled European Champions Cup and Challenge Cup pool stage games have been cancelled.

It is because the match will see Saracens, the five-time Premiership champions and three-time European champions, kick off life after their enforced relegation for salary cap breaches when they face Greene King IPA Championship promotion hopefuls Ealing Trailfinders in the Trailfinders Challenge Cup.

Here is the full fixture list for the Trailfinders Challenge Cup ⬇️ pic.twitter.com/C8maNMCuva

It will not quite be into the unknown for either side though as Sarries and Trailfinders have been regular training partners in recent years, although that familiarity will in no way diminish Ealing's desire to be victorious in what will be their first competitive game since last March.

"Over the last couple of years, we've looked up to them in terms of what they've done - and they've been hugely successful," Ealing director of rugby Ben Ward told Sky Sports.

"It's kind of a unique situation that we have a good relationship with them, but I guess we're rivals this year in the league playing against each other for the first time.

"But that won't change that relationship, and for us and me personally it's been great to see how they operate, how they've achieved the success they've had, and we've been able to take that stuff back in house and improve what we do. 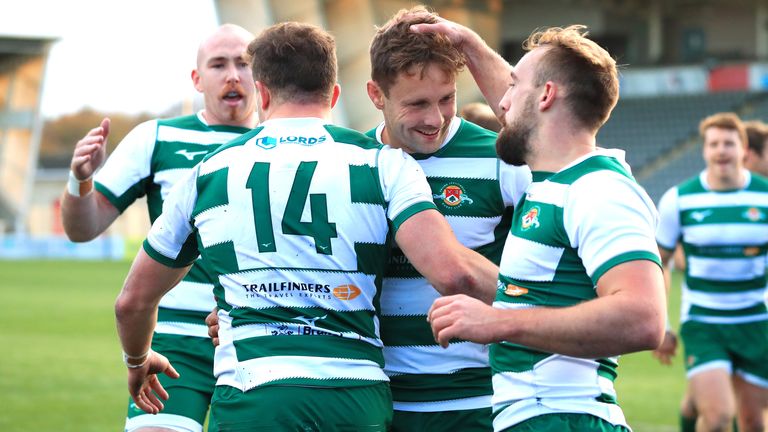 We want to play at the highest level we can and to do that you've got to turn up and see what you can do against the best teams in the country.

"Looking at the bigger picture, going forward we want to play at the highest level we can and to do that you've got to turn up and see what you can do against the best teams in the country."

The link between the two clubs runs deeper, with former England scrum-half Richard Wigglesworth combining his final two seasons of playing for Sarries with gaining experience as a coach at Trailfinders.

Ward appreciates the opportunity to pick the brains of his opposite number at Saracens, Mark McCall, as well. Perhaps the stand-out lesson from those sessions though has been the insight it has given everyone at Ealing at how teams and individuals play at rugby's highest levels.

"The biggest thing is the speed at which they operate," Ward said. "Their speed of thought, their speed around the pitch.

"The lower the level you go in rugby, everybody watches the ball for a second or two more, but when you're in those types of training sessions the mind has to move just as quickly as the body and the speed into position is relentless.

"You probably see that in the international game now; a lot of people criticise there being a lot of kicking, but the defences are so good now. There is a wall in front of you all the time and it's very difficult to play through or around it."

The fact Saracens, Harlequins and even the England national team have called on Ealing for opposed training sessions in recent seasons is a sign of just how far Trailfinders have progressed in the past 15 years.

Ward, appointed director of rugby seven years ago, has been a major part of their rise too, having initially joined in 2004 as a callow fly-half fresh out of London Irish's academy - via a short stint at Esher - when Ealing were still playing in London Two, the sixth tier of English club rugby.

The patronage of owner Mike Gooley, founder of the Trailfinders travel company which now gives its name to the team and the Sports Club at Vallis Way, has undoubtedly helped Ealing rise through the leagues to the Championship, where they were sitting second before the Covid-19 pandemic saw what remained of the 2019/20 season cancelled.

Gooley's investment in Ealing has been one of gradual increase across all parts of the club rather than largesse on just the playing side though, with much put into building up the facilities at the club's home which include an artificial pitch for the first team and has recently seen work begin on a new indoor training centre.

Trailfinders have developed an academy programme which has strong links with nearby Brunel University to ensure players have an education to fall back on if their professional rugby ambitions are not fulfilled too, and earlier this month unveiled a similar women's and girls' programme.

"Coming up the leagues, I think we've had to evolve," Ward said. "Sometimes that happens too quickly, and a lot of money is invested, but it has been a gradual investment and not just on the pitch with players.

Recruitment for the programme is open now so make sure to spread the word! #RugbyScholarship pic.twitter.com/1ggSpB8HbV

"It has been on the facilities, Trailfinders Sports Club, what we're doing with our academy and we've recently announced a new women's pathway.

"It's not just what happens on the field at 3pm on a Saturday with our first team, it's the whole infrastructure and we've only been fully professional for seven years."

For now, though, the focus for Ward and his team is the three-team Challenge Cup, which also includes Doncaster Knights and is being played over the next six weeks ahead of the 2021 Championship season's scheduled start date of March 6.

Whether any of Sarries' international stars feature on Saturday remains to be seen, but Ward would relish his side tackling those icons - particularly as these two could well end up battling it out for the Championship title and promotion in the two-legged final at the end of the league season.

"Whether it's Saracens or Exeter, you've got probably the highest challenge in English rugby at the moment," Ward said.

"We've got Saracens as our challenge, but we're very confident in what we do as a club and we're certainly going to embrace that challenge."