England head coach Eddie Jones believes New Zealand are "there for the taking" and that the All Blacks do not have an aura.

Jones' England will run-out in front of a sell-out crowd at Twickenham Stadium on Saturday and aim to replicate the winning-performance they delivered against New Zealand at the Rugby World Cup in 2019.

The All Blacks arrive in London after a tense encounter with Scotland last weekend, where a changed side from the one that clinically dispatched Wales earlier this autumn, came from behind to win 31-23 at Murrayfield.

Jones made it clear after England's win over Japan last Saturday that his side would "go after" New Zealand and reiterated that sentiment on team announcement day.

"New Zealand have won five or six in a row now, they're a team that's redeveloping," Jones continued.

"They've had some of their older players being injured but they have Brodie Retallick and Sam Whitelock back now, (Ardie) Savea is at his best, so they've got a great combination of players and I'm sure they're going to be at their best on Saturday." 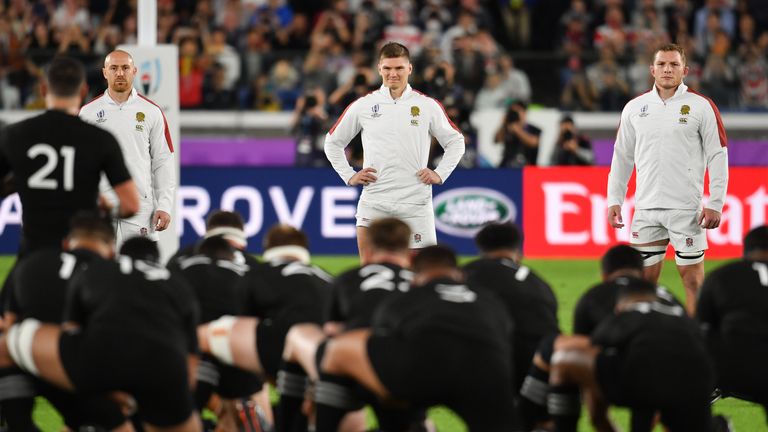 It's the benchmark game of the year for England to play against New Zealand. You find out a lot about yourselves as a team, you find out where you are in terms of the world and we're all excited by it.

With the success that New Zealand's All Blacks have achieved in the sport, the topic of the team having an 'aura' about them is often discussed. Jones is clear about his stance on that.

"So, to me, they've never had an aura, they've had a lot of power and a lot of ways to bully teams and we've got to make sure that we don't get bullied on Saturday."

Owen Farrell will lead England out on Saturday and the match marks his 100th international cap.

"Owen makes every team he plays in better," Jones said about his captain. "He's always driven for the team to be at its best. Every training session, he's uncompromising on standards and I've never seen him flinch from that.

"There's no reason why he can't keep on getting better as a player. He had a bad run of injuries this year, he came back and we asked him to play three Tests at his best in Australia. He did that."

Jones has decided to start Jack van Poortvliet at scrum-half with Ben Youngs, who owns 119 caps, being named on the bench.

"To have those two guys is fantastic for the team. Benny will probably play in the last 20 minutes of the game and that's when you win or lose the game against New Zealand.

"This is all part of his (Jack's) progression. Sometimes we push him forwards and sometimes we pull him back, we're just trying to get the right balance.

"It's like when you have a racehorse you don't run them for seven weekends in a row, if you want them to be at their best for the Cheltenham Gold Cup, sometimes you put them out and sometimes you pull them back.

"The contest against New Zealand at the breakdown is huge," Jones said.

"They've got (Ardie) Savea and Dalton Papali'i, who are at the top of their game and then Scott Barrett at six gives them a bit of bulk around the breakdown. We just felt we needed a bit more speed this week."