Bath wing Semesa Rokoduguni is a wild card in England's squad for the autumn internationals. What do we know about him?

The 27-year-old beat the likes of Chris Ashton and Christian Wade to a place in Stuart Lancaster's squad for November's clashes with New Zealand, South Africa, Samoa and Australia - but remains somewhat of an unknown quantity on the world stage.

Semesa Rokoduguni was born on August 28, 1987 on the Fijian island of Nausori, growing up playing rugby but failing to make his village side. He reflects with a smile: "I was always told that there was someone who was a better winger than me and then found out it was one of my uncles – I hated him!"

At the age of 20, the British Army visited the area on a recruitment drive and Rokoduguni signed up - resisting overtures from the Fijian national side in favour of honing his craft while part of the Royal Scots Dragoon Guards. Later in 2007, Rokoduguni completed a tour of duty in Afghanistan, working as a reconnaissance tank soldier.

It was four years later in 2011 that Rokoduguni first began grabbing headlines for his rugby skills as part of the Army Rugby Union XV - running in four tries against the RAF and three against the Navy to become the most talked about prospect in Forces rugby.

The following season, the Army invited Newcastle for a mid-season training game and then-Falcons coach Mike Ford recalls: "It fitted into our season because it was the LV= semi-finals so we had no games. We were 31-0 up and having it pretty easy and then they put this kid called 'Roko' on and he scored three tries. It ended up 31-31 all.

"When we left Newcastle that season and came to Bath it became a bit of a two-way fight where he went and fortunately we got him. He had the speed and beat defenders quite easily. We thought in a professional environment, he'd be worth the risk."

Rokoduguni eventually signed for Bath in October 2012 in the wake of a two-week trial. He made his debut in the LV= Cup the following month and scored his first try after just nine minutes - showing the sort of promise that would win him an Aviva Premiership debut against Harlequins less than two weeks later.

The progress continued steadily over the next year as Rokoduguni settled in to the life of professional rugby while continuing his duties as a Lance Corporal in the off-season, but it was the 2013/2014 campaign that saw him convert raw talent into potential world class.

Having won the 'Game Changer' award in October 2013, consistent performances at club level meant Rokoduguni was handed his chance for England Saxons in January of this year and then turned out for an England XV against the Barbarians in the summer.

He signed a one-year extension with Bath that will keep him at the Recreation Ground until 2016 and Ford, who has seen his development as a rugby player first hand, had further words of praise for his charge following news of his call-up to the full England squad. 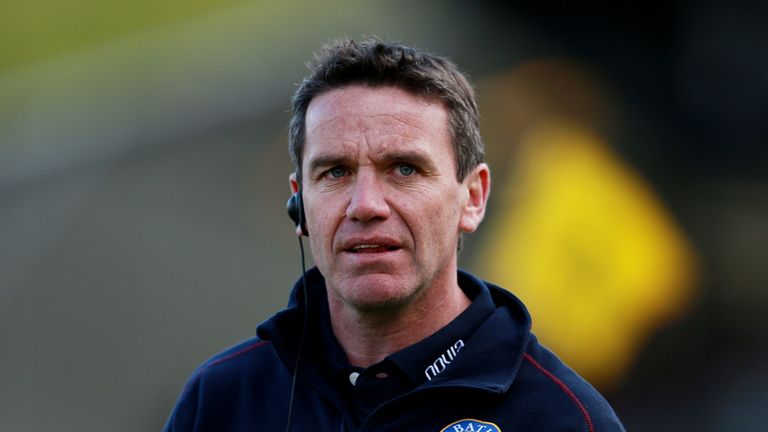 He's run the ball from behind his own line and made great breaks for us this season. That's something that you can't coach and from our point of view, we hope England try to play him the same way.

Ford told Sky Sports News HQ: "His form's been brilliant this year. Stuart said he'd pick the men in form and he's done that. The important thing about Roko is that he's a free spirit. We found that he doesn't respond well if you put too much detail into him in terms of the gameplan. You've got to let him play.

"He's run the ball from behind his own line and made great breaks for us this season. That's something that you can't coach and from our point of view, we hope England try to play him the same way.

"When he first came, the discipline, wearing the right kit and giving everything, he was always top of the class for that. I know from speaking to him that a couple of his friends suffered serious injuries and he sees every opportunity as his last one."