Eddie Jones says Manu Tuilagi needs to lose weight but has not ruled out picking the Leicester centre for the Six Nations.

Tuilagi has played three successive games since returning from a long-term knee injury but was omitted by Jones for England's two-day training camp in Brighton.

However, the England head coach told Sky Sports News that he will be keeping a close eye on the 26-year-old ahead of their Six Nations opener against Italy on February 4. 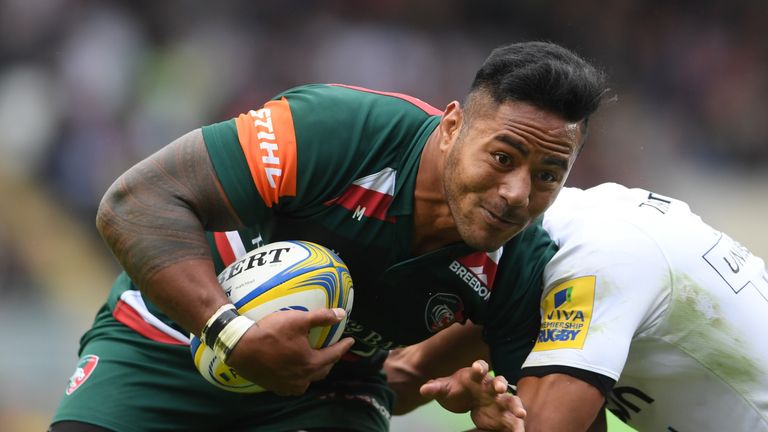 He still needs to lose a bit of weight - I think those turkeys at Christmas were good!

"We're working with Leicester," said Jones of the centre, who last played for England in the 2016 Six Nations.

"At the moment he needs dedicated training time with his club. With every game he gets a little bit sharper.

"He still needs to lose a bit of weight - I think those turkeys at Christmas were good! Or maybe the Samoans eat roast pigs, I think he had plenty of that. But he's moving in the right direction.

"Is he in my plans for Six Nations? Potentially. He's still got the ability to do things that others cannot do. He's someone we'll keep watching very closely."

Meanwhile, Jones has backed Dylan Hartley to continue as England captain despite his below-par performances for Northampton.

Hartley has struggled in a Saints side that has lost seven games in a row and conceded 50 points for the third time this season against Harlequins on December 30.

Jones believes the sacking of Jim Mallinder has increased the pressure on Hartley but he doesn't think his form for Northampton will impact on his performances for England.

"Dylan came into camp full of beans," said Jones. "It has been a tough time for him. His club's not doing well, unfortunately his director of rugby was asked to leave, which makes it a difficult place for a captain.

"He's carrying a lot of responsibility which has probably affected his on-field performances for Northampton, but he has come into camp and been good.

"The good players, and Dylan's a good player, are able to compartmentalise issues. That's an issue he has with his club, he doesn't have it with England. What we saw in the England camp was a different player to what we've seen for Saints.

"I pick on historical form, current form and potential form. For each player it's a balancing act.

"Dylan's a great leader for us - if he wasn't he wouldn't be in the team. That's been proven by his record. I don't think there's any Test captain for England in rugby or cricket that has his record."

Jones welcomed Billy Vunipola back into his squad in Brighton and says the Saracens No 8 could feature in England's Six Nations opener.

"He ran out of puff a bit but trained well," said Jones. "We're really glad to see him back.

"In any team he plays he's an influential player. He's a big ball carrier, he's got skill, aggression. We'd certainly like to see him play more than one Test this calendar year.

"Will he play against Italy? He's got three weeks to go. He'll be with his club but he knows he's got to do a little bit extra.

"If he does that and gets through some good game time, there's an opportunity for him to play against Italy."

One of the surprise inclusions in Jones' squad was London Irish winger Joe Cokanasiga but the England head coach believes the 20-year-old could solve their lack of bulk in the backs.

"When we played Australia we gave up 9kgs per man in the backline," he said.

"We don't have a physically big backline. Size isn't everything but to have one big winger is handy and he fits that bill. He's got speed, power, he has been a good performer for England U20s.

"He's pretty laid back but serious. He wants to do well. With his speed and power he's worth taking a punt on.

"He's got something about him. It's just a matter of whether we can get him fit and then he's got to start playing well for London Irish."