Scotland's win over Italy has been a long time coming for Rory Sutherland but the prop hopes he will not have to wait another four years to savour his next triumph.

The Edinburgh forward was given his international debut by Vern Cotter in March 2016 against Ireland, winning two more caps as the Scots claimed back-to-back Test wins during their tour of Japan later that summer.

But that was it for the 27-year-old for the best part of three-and-a-half years.

Struggles with form and fitness left him on the outside looking in until he finally convinced Gregor Townsend he was ready to return ahead of this year's Guinness Six Nations.

The narrow losses to Ireland and England only increased the Hawick scrummager's frustrations but he was at last able to snatch another taste of victory with the national team as he contributed to a 17-0 win over the Azzurri. 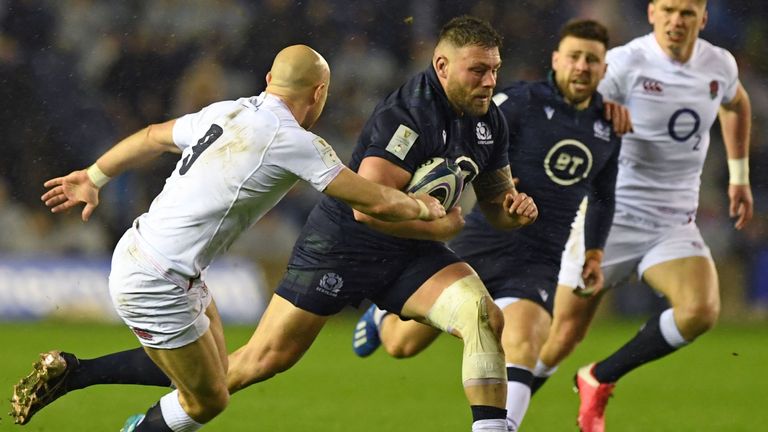 When I was injured it was always something that kept me going, was thinking about playing for Scotland again. That was the goal.

Now Sutherland hopes to tuck into another serving when Grand Slam-chasing France visit Murrayfield on March 8.

He said: "My last win in a Scotland jersey was four years ago in Japan, so this feels really good.

"I'm just grateful to be given the chance to be back involved. On a personal level, I've been really happy with my performances and I've just got to keep a bit of consistency in my game now and keep backing it up.

"I'm really pleased with the win and we'll look forward to preparing for the France game. Hopefully I get another opportunity in that starting jersey.

"When I was injured it was always something that kept me going, was thinking about playing for Scotland again. That was the goal.

"Putting little targets in place to reach that final goal. I've had a couple of tough seasons, I've not played a lot of rugby but I feel the opportunities that I've been given I've taken them.

"It's nice to be back at this level and playing some good rugby."

Skipper Stuart Hogg answered his critics with a stunning solo try to get Scotland motoring in Rome, with Chris Harris and Adam Hastings also scoring as the Scots ended a year-long wait for a Championship win.

But having blown a host of chances in Dublin and at home to England, Townsend's team allowed at least another three gilt-edged openings to slip through their fingers.

And Sutherland admits Scotland need to develop a killer instinct if they are to slay a Les Bleus side who have won all three games so far.

"We've come close the last couple of games against Ireland and England but we struggled in the finish zone," he said.

"We need to be a lot more clinical there, we've had a bit of white line fever.

"But to come and win an international game away from home against Italy, we're really happy.

"A couple of times against Italy we got really close and just made a couple of bad decisions. If we can right that going into the last couple of games we'll be okay."

Hogg took the blame for Scotland's two opening defeats. First he spilled a certain try on the line against the Irish before another fumble handed England the scrum from which they claimed their match-winning score.

But Sutherland said: "A lot of people have been talking about Hoggy's mistakes but he's made a fantastic jump into that captain's role.

"He's been flung in the deep end and he's done really well. I don't like it when people talk about his mistakes because you've got to look at what he's done for Scotland.

"Hoggy's done a hell of a lot and he deserves to be where he is. I'm really pleased to see him back on form and getting that try."