England and England Women will both be in action on Saturday, live on Sky Sports

It is clear - after another busy weekend of international rugby - that two individuals have a disproportionate influence on the game of England and England Women.

Fly-halves by trade, both Owen Farrell and Katy Daley-Mclean wore a shirt with a number that represented that of a 'finisher' and both were brought on earlier than expected with the expectation to "change the game". 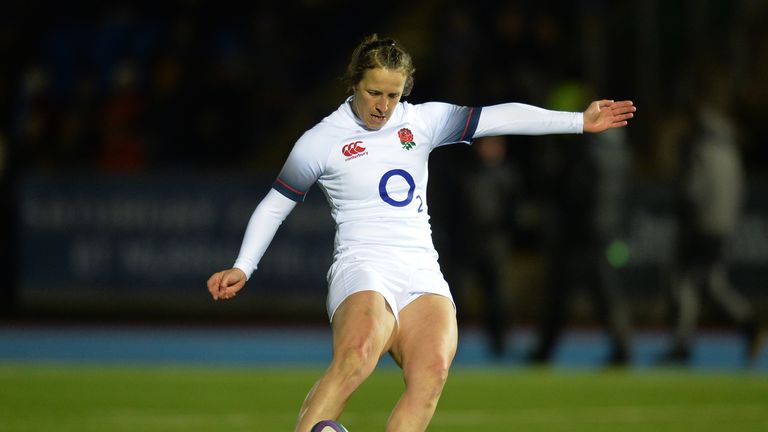 Katy Daley-Mclean says it feels like she's been waiting a long time to earn her 100th cap for England women when they face the USA in the Quilter Internationals on Friday.

England's first back to become a centurion, Daley-Mclean, helped to see out the game against a strong Canadian side.

Her try late in the first half left the teams in a close battle of 15-12. Brought on to settle the England side, Daley-Mclean used her right boot to keep Canada playing out of their own half.

Almost instantly you also saw Rachael Burford, England's No 12 come more into the game, as the speed of ball delivery increased, giving her an extra yard in which to play.

This level of play is something we have become accustomed to from Daley-Mclean and standing in the commentary box at the USA game, I was able to see just how she has continued to develop her game. She produced a first-class performance that also earned her the player of the match medal.

The previous week, as the game against United States kicked off under the lights of Allianz Park, the sideways rain and driving wind was in favour of the visitors. However, it was Daley-Mclean who ran the show, slicing through the defensive line to set up the first try for Abbie Scott and pouncing on a bouncing ball to run 50m and finish off an impressive individual effort herself.

Bizarrely, the US took no advantage of the weather which was in complete contrast to Daley-Mclean. As soon as the Red Roses turned around after half-time, we saw just how well the horrendous conditions could be used for territorial gain. Unable to exit efficiently, America struggled to string many phases together as the onslaught of the English defence proved to be far too dominant.

Although the young English side produced a relatively good performance, it was the individual, technical ability and tactical control of Daley-Mclean that had the biggest influence on the game.

This was not something new. Over recent years we have seen a significant improvement in the kicking game of female players and no one more so than the Red Rose fly-half.

In June 2017, we travelled to New Zealand and beat the Black Ferns for the first time in 16 years. Playing in the rain, and with a dominant lineout catch and drive, Katy marshalled us around the park with a variety of kicks both in the air and along a wet slippery ground.

It was the first time the world's rugby media stood up and took notice of the tactical use of our kicking game. Something that now plays the biggest role in differentiating between the top three teams, the Red Roses, the Black Ferns and the French and the rest of the World.

Alongside the use of her right foot, Katy also plays a significant leadership role on the field. Although no longer holding the captaincy armband, she will lead on-field communication, not only from a tactical viewpoint but also from the emotional angle that often helps to galvanise a team's morale.

Interestingly, this leadership role is something that is also apparent when Owen Farrell is on the field sporting the red rose.

On Saturday, we witnessed a rather underwhelming performance from the England men. Yes, there were 11 changes, but for me, this should have intensified how England approached the collision area in both attack and defence.

They were slow off the line in defence in comparison to the previous two weeks. In attack England lacked the dominance you would expect to come from some significant size mismatches between the teams and they struggled to find holes through or around the shape presented by a busy and effective Japan defensive line. 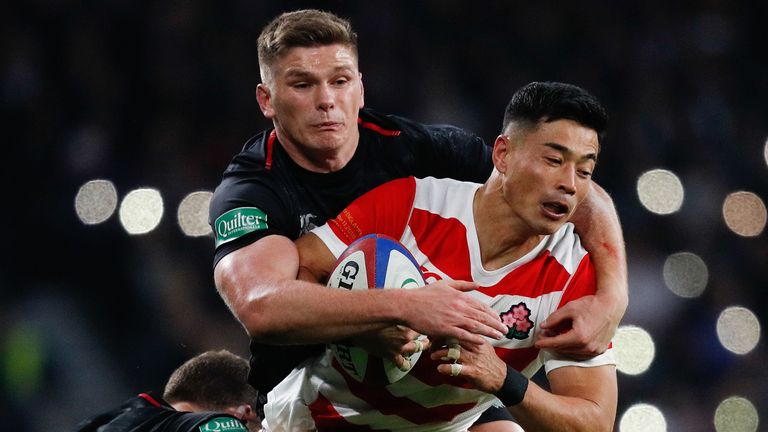 The Sky Sports rugby team analyse the key moments in England's win over Japan at Twickenham.

After the half-time break, there was a momentum shift when a certain hard-hitting, abrasive player took to the field.

Owen Farrell instantly changed the dynamic of the England team. As expected, he brought the shift needed to intensify the English defence which in turn pressurised the well-drilled and slick handling of the Japanese team. He also straightened the English attack and was the first to beat the edge of the umbrella defence, to put Jack Nowell into some space.

But it is his work away from the ball that I feel influences the team the most. It is speed of recovery and work rate getting back into the defensive line which allows him to get square and come forward with aggression.

When Mark Wilson scored his try, Farrell was one of the furthest from the grounding. However, he not only ran in to congratulate him but clearly communicated for the rest of the team to do so as well, rather than wander back to their own half. He clearly recognised the importance of celebrating the team's achievement of scoring.

Following the next restart, Japan gave away a penalty and whilst Ford was gathering the ball, Farrell shouted at the forwards to get up off of the floor. He then demanded to know what Maro Itoje wanted from the up and coming line-out, clearly bringing an expectation to get on to the next job and lift the tempo of both the players' actions and their thought processes. These actions are not in isolation, but apparent throughout all of the time Farrell is on the field with strong communication and clear, decisive body language.

Now I am not saying that other fly-halves do not have the technical/ tactical skills held by both Daley-Mclean and Farrell, but it is the influence that they also both have on the overall team mentality that is significant. They both seem to be involved in the moments where momentum shifts and demand things from the players around them that helps to shift performance.

With players that are this influential, should England worry about what they would do without them? Or is that the pessimistic view, and as proud English fans, should we just enjoy the fact we have them both as one of our own?

For the England men, the World Cup is less than a year away. I feel selection for the squad is not about who else can wear the 10 jersey, but who else can offer these leadership qualities possessed by Farrell when he is not in the side?

The Red Roses are under slightly less pressure as it is not for another three years that they will travel to New Zealand for the next World Cup. Like the men, they have a large pool of talented players coming through the system. However, with the time available, it is imperative for England to find a group of players that have the confidence, maturity, and respect for each other, to demand the highest of standards, whilst putting their body on the line for the team in the moments that matter.