Six Nations team of the tournament

Wales and England Women secured Grand Slams in the final weekend of the Guinness Six Nations, but which individuals shone throughout the tournaments?

Liam Williams has been in impressive form throughout the tournament; assured under the ball and a genuine threat when returning it at ground level.

Wales were dealt some misfortune early in the tournament with the fitness of Leigh Halfpenny a continued concern, but Williams provided a safe pair of hands on which Warren Gatland could rely at full-back.

On Saturday evening Jessica Breach continued her impressive rise in international rugby by scoring two tries to take her tally for this year's Six Nations to nine - an incredible feat.

The winger is still only 21 years old, but is an integral part of the team's go-forward - and given England beat Scotland 80-0, that go-forward is in good shape overall.

Emily Scarratt was brilliant for England for the duration of their campaign, but Jonathan Davies gets the nod in the No 13 jersey for the way he marshalled the Wales midfield throughout an unbeaten run that extends far beyond the Grand Slam.

Davies has been tireless all though February and March, which is saying something as he was one of only two Welsh players to play every minute of the Grand Slam. Can you guess the other?

If Davies was marshalling, Hadleigh Parkes was carrying out the orders with little regard for the anxiously-onlooking Welsh physio.

The No 12 was destructive in the way he refused to be brought down in the tackle, and there is little doubt he is the man to partner Davies in the Welsh midfield at the World Cup.

Breach was not the only England player who was scoring tries all through the Six Nations; Jonny May finished top of the men's competition overall after crossing the whitewash six times.

A mention for Josh Adams, who was the other player besides Davies to see out all the games for Wales, and was a constant nuisance to defences in that time.

Finn Russell's deserved man-of-the-match gong at Twickenham over the weekend almost earned him the fly-half berth in our team of the tournament, but for consistency Dan Biggar wears our No 10 jersey.

The Northampton man started only one of the five games, but made an impact each time he joined the fray, and never once looked to be put out that he was left on the bench at the start.

The only Frenchman to make it into our team, and given the performances and final position in the table you would be hard-pressed to argue for any more.

However, Dupont was undeterred for Les Bleus despite their poor showings in the first five outings of 2019. The French national team would do well to end their notorious merry-go-round of half-backs and give Dupont a crack at the World Cup.

Rob Evens is a prop who has always had certain elements to his game such as offloading or solid scrummaging, but they were not always present at the same time during the early stages of his career.

However, he is transforming himself into a world-class loosehead capable of mixing it with the rest of the props up front while also offering plenty in the loose.

Alun Wyn Jones may be the man with the captain's armband, but he is surrounded by leaders and Ken Owens certainly is one of them.

The hooker is a calm voice in the chaos of a Six Nations final quarter, and he offers a ball-carrying as well as tackling option to his team-mates along with his set-piece duties.

Much like Rob Evans, Sarah Bern is developing into a genuinely world-class front rower, but her transition has been even quicker than that of the Welshman.

The tighthead still has work to do in the set piece, but her break against Ireland in the opening round shows if she cannot completely master scrummaging, they can just move her to the backline.

James Ryan may not have quite the record he did at the start of the year, but he's still only lost two out of 16 Tests in an Ireland jersey.

The second rower is maturing fast at the top level, and if you were to pick the British and Irish Lions' pack for a 2019 tour, the Leinsterman would be a good shout to start the Tests.

How many more years will Alun Wyn Jones go on for? If you were picking that Lions pack then Jones would be one of the first names on the team-sheet, but he will still only be 35 for the 2021 tour of South Africa - will he be flying into Johannesburg in two years' time?

Representative teams aside, could Jones become the first player to pass 150 Tests? He's played 125 for Wales and eight for the Lions so far, and is showing no signs of slowing down.

Josh Navidi was played out of position to accommodate Justin Tipuric in the No 7 jersey, but it did not impede the Blues flanker from causing trouble at the breakdown.

Wales, more than most, are blessed in the loose forward category, and there will be plenty of competition for places in Japan later this year. During the Six Nations, Navidi went a long way to securing his place on the plane.

Tipuric was close to taking this jersey, but Tom Curry was among some of the younger players to really stand out in this year's championship.

The No 7 made 86 tackles over the course of the men's Six Nations, the most out of anyone in the tournament, and also turned the ball over five times, which was the most by an Englishman.

Sarah Hunter packs down at the back of the scrum but in all other aspects of the game she leads from the front. The No 8 does a lot of tireless work for her team while the others such as Breach, Scarratt and Kelly Smith are scoring tries out wide.

Narrowly missing out on this jersey is Braam Steyn, who was a shining light for Italy over the course of their wooden-spoon campaign. 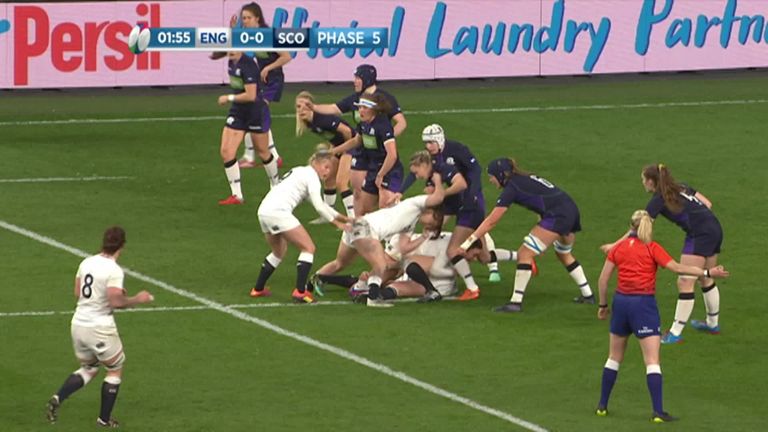 Who was your player of the tournament? Have your say by voting here, or Tweet us @SkySportsRugby