He also took to Twitter to criticise Tasmania's decision to become Australia's first state to make it legally optional to list gender on birth certificates, posting that "the devil has blinded so many people in this world".

Rugby Australia confirmed on Wednesday they were investigating Folau's remarks but have since been unable to contact him.

Rugby Australia chief executive Raelene Castle and her Waratahs equivalent Andrew Hore said in a joint statement they decided to terminate Folau's contract "in the absence of compelling mitigating factors".

"Rugby Australia and the New South Wales Rugby Union have made repeated attempts to contact Israel both directly and via his representatives since 6.30pm on Wednesday, and at this point he has failed to communicate directly with either organisation," Rugby Australia said in a statement.

"Whilst Israel is entitled to his religious beliefs, the way in which he has expressed these beliefs is inconsistent with the values of the sport. We want to make it clear that he does not speak for the game with his recent social media posts.

"Israel has failed to understand that the expectation of him as a Rugby Australia and NSW Waratahs employee is that he cannot share material on social media that condemns, vilifies or discriminates against people on the basis of their sexuality.

"Rugby is a sport that continuously works to unite people. We want everyone to feel safe and welcome in our game and no vilification based on race, gender, religion or sexuality is acceptable and no language that isolates, divides or insults people based on any of those factors can be tolerated.

"As a code we have made it clear to Israel formally and repeatedly that any social media posts or commentary that is in any way disrespectful to people because of their sexuality will result in disciplinary action.

"In the absence of compelling mitigating factors, it is our intention to terminate his contract."

Folau, who has won 73 caps, would have been a key part of Australia head coach Michael Cheika's World Cup plans this year.

Last weekend, he broke the Super Rugby try-scoring record as he scored his 60th for the Waratahs in the competition, breaking the record of former New Zealand winger Doug Howlett.

The 30-year-old former rugby league international signed a new deal with Rugby Australia in February which was set to run until 2022.

Folau posted similar comments last year, saying God's plan for LGBT people was "HELL.. Unless they repent of their sins and turn to God".

In the wake of those remarks, he met with Castle and Hore but he was not formally sanctioned.

He subsequently wrote an article for PlayersVoice in which he stated: "I believe in inclusion. In my heart, I know I do not have any phobia towards anyone."

He also offered to quit playing rugby union for his country.

"During the meeting I told them it was never my intention to hurt anyone with the Instagram comment, but that I could never shy away from who I am, or what I believe," he wrote.

"I told them if they felt the situation had become untenable - that I was hurting Rugby Australia, its sponsors and the Australian rugby community to such a degree that things couldn't be worked through - I would walk away from my contract, immediately."

Former Wales rugby player Gareth Thomas, who announced he was gay in 2009, wrote on Twitter that people should "not be influenced" by Folau's words and that he had "sympathy" for Folau.

I don’t write this with hate or anger after Israel Folau’s comments.I write with sympathy. To everyone who reads it, don’t be influenced by his words. Be the better person and be YOU. Whoever YOU is..Hell doesn’t await YOU.Happiness awaits YOU.🌈❤️

England international James Haskell wrote to Folau and said "sport has no place for this ... keep it to hate groups. You are an unreal player, but a ... misinformed bigot".

International Gay Rugby (IGR), the global organisation for the world's gay and inclusive rugby clubs, has welcomed the decision by Rugby Australia.

"Rugby has become one of the most inclusive sports on the planet, where players, spectators and officials, regardless of their ability, race, age, sexual orientation or gender identity and expression can enjoy the game without fear of discrimination by others. 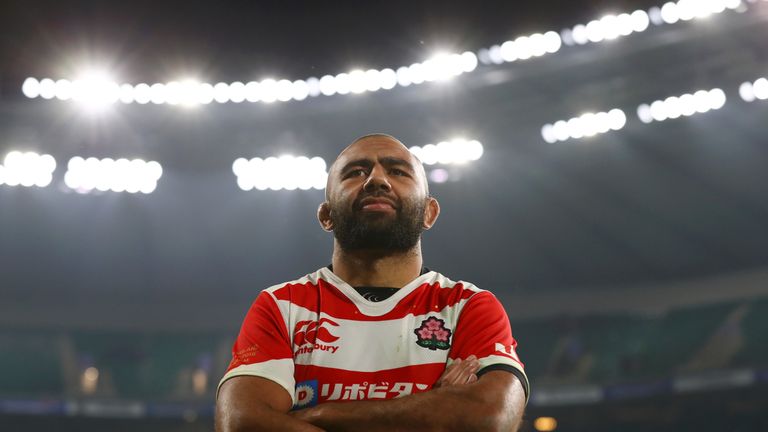 "When someone like Folau makes statements like this, it sends a message that members of the LGBT community are less-than and it can have irreparable harm.

"On behalf of our gay and inclusive rugby community, we hope the decision made today sends a clear message to the world, that any kind of discrimination has no place in our sport."

"Folau's comments are just one example of how much work is still left to do to combat discrimination and the use of hateful language against lesbian, gay, bi and trans (gender) people," said Kirsty Clarke, the director of sport at Stonewall.