"You're always striving for the perfect game. For me, that was probably the closest I got in my 112 Test matches for the All Blacks. You'll never say that you've played the perfect game…but that was as close as I got" 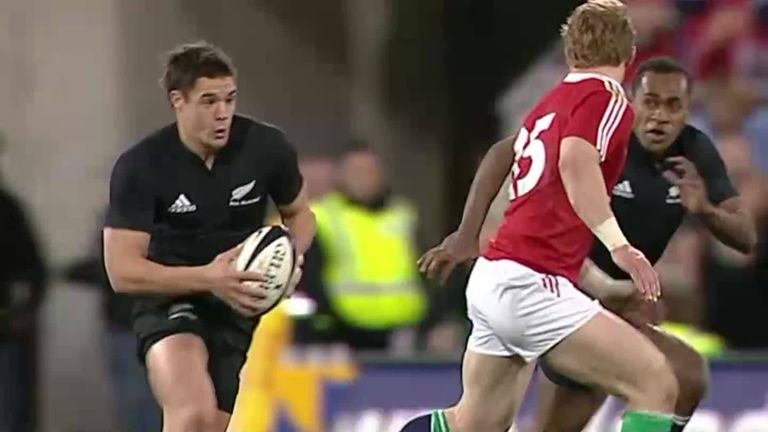 Fifteen years after the fact, the former All Black spoke exclusively to Sky Sports' Rugby Retro about the match that changed his career and his life.

Carter's individual tally that night in Wellington revealed a truth that he was unable to immediately grasp. Thirty-three points from two tries, four conversions and five penalties, it was a single match total he would never surpass in an All Black career that would last another 10 years, and include countless Bledisloe Cup wins, multiple Rugby Championship titles, and two World Cups.

"The final whistle went and we were all ecstatic, we'd just won a Lions series and I was so proud of the team. Little did I realise the impact I had on that game," remembers Carter.

"I went to the changing room, and the boys were celebrating. I always sit next to Ma'a Nonu, and we always have a joke after each Test match about how many text messages you receive. After a test match, Ma'a would probably get 25 or 30 texts, and I'd probably get about the same. It'd always be really close.

"But all of a sudden, I turned on my phone, he was sitting next to me and he was gutted - my phone was just going 'ding, ding, ding', all these messages came through, and I clocked up probably over a hundred messages of congratulations, and that was another insight of 'OK, this game was pretty special'."

Despite the imperious nature of his performance, Carter's journey to the number 10 cubicle in that All Black changing room only began in earnest nine months prior, as Graham Henry sought a solution to the long-running, and nationwide, fly-half debate.

"It was only my fourth or fifth Test match in the number 10 jersey, and the previous two years I'd played for the All Blacks I played at second-five eighth (inside centre) alongside a couple of legends of the game, Carlos Spencer and Andrew Mehrtens. They were two completely different players in the style they played, and I felt like I learnt a lot from them.

"The end of year tour in 2004 we travelled to Europe and I got thrown into the leadership role of having to drive this All Black side. I think I was only 22, 23 years old.

"I was relatively young to be doing that and I was still learning, but one thing the coaches showed in me was a real trust in my ability to play in that pivotal position on the biggest stage in a Lions series. I really wanted to prove [my worth] to them for showing faith in selecting me ahead of a couple of icons of the game."

It would be a position he would never relinquish, and neither Spencer nor Mehrtens would play for the All Blacks again.

After one windy night in Wellington, the world had been introduced to the man they called 'DC'.

"I didn't realise the impact it would have after that, but there's probably two key tournaments in world rugby, and for me they are Rugby World Cups and Lions series'.

"If you want to make a name for yourself on the international stage, you have to play well through the Six Nations or Rugby Championship for maybe two, three, four years consistently, or in a Rugby World Cup or a Lions series, you can reach that international fame…through your performance in a single series."

In Carter's case, a single match.

"Because it was only my third year playing, I was a bit naïve to how big a Lions series was and [while] people were starting to recognise me around New Zealand, all of a sudden it became a bit more from different parts of the world, 'OK who is this Dan Carter guy?' It almost felt like I put my name on the international rugby stage after that series."

He remains on that stage, an international icon of the game, with the spotlight of the Japanese Top League a little less intense than that which has followed him the majority of his career. With club rugby in Japan cancelled for the remainder of this season due to the Coronavirus pandemic, speculation of retirement has been growing.

Time perhaps to sit back and reflect on past achievements?

"I haven't watched it from start to finish. I've seen highlights that pop up everywhere. I was watching some highlights of the game, and all I could think was how greedy I was, I can't believe how little I passed in that game, it was embarrassing!"

"Who knows? Maybe there'll be some of these games relived leading into the next Lions series in South Africa, I might sit down with a nice glass of red wine and drag my three sons to watch their old man and see what he used to be able to do."