We pick the standout players from the weekend rounds of the Gallagher Premiership, Super Rugby AU in Australia and the return of the PRO14 for our latest team of the week....

The PRO14 returned over the weekend with a series of derbies, and among them was Connacht vs Ulster at the Aviva Stadium in Dublin, with Andy Friend's side beating the northern province 26-20.

Crucial to victory was Australian full-back Porch, who scored one try after taking a sublime Jack Carty offload in to score, and made another score with some fabulous attacking play down the left, bursting past two Ulster defenders and kicking inside for Kieran Marmion to score.

He also made 10 carries for 75 metres, earned one turnover and made two clean breaks in the win.

The Premiership leaders Exeter travelled to star-studded Sale on Friday and after falling behind, responded with a superb show of strength.

First, he took a gorgeous reverse, inside-pass from Henry Slade to scorch past the Sale defensive line and set-up Sam Simmonds after 90 seconds, while with the score level at 17-17 in the second period, he took a wonderful Joe Simmonds pass to break through again and set up Stuart Hogg for a crucial try.

What a signing Radradra looks for Bristol. On the road against Gloucester on Friday, he was outstandingly good.

The Fijian centre made 16 carries - the most of anyone on the pitch - beat four defenders, scored one try as he scythed through and reached out to ground, and set-up two other tries - passing onto Max Malins for one and carving through before throwing a wondrous offload to Harry Randall for another in the 33-24 win.

He also carved out a monstrous 147 metres in attack - again, the most of anyone. Quite simply, one of the best players in the world.

Defending PRO14 champions Leinster returned to action on Saturday, as they hosted fiercest rivals Munster in Dublin in a humdinger of a contest.

In the end, Leo Cullen's side did just enough to clinch a 27-25 victory, with centre Ringrose so influential, we've shifted him one to fit him in alongside Radradra.

The Ireland international made 74 metres in attack - the most of anyone on the day - as well as 12 tackles, one turnover, two clean breaks, scored a critical try right on the verge of half-time and beat four defenders.

It was also telling that when Johnny Sexton departed in the second half, Ringrose was made captain. A player growing in stature and importance, no question.

Richard Cockerill's Edinburgh knew if they could beat rivals Glasgow at Murrayfield on Saturday and Munster were to lose to Leinster - as ultimately transpired - they would be guaranteed top spot in Conference B and a home semi-final berth.

A tight contest saw Glasgow leading by two points until the final quarter, when Edinburgh wing Van der Merwe blew the contest open courtesy of a stunning piece of play off his left wing.

We've said it before, we'll say it again: don't mess with the @duhanvdmerwe 👊

The @EdinburghRugby star only needs one hand to set up @nicgroom 👏

The big wing stepped inside two players with the ball in one hand, before offloading inside for Nic Groom to score and set Edinburgh on course for a huge 30-15 victory.

Van der Merwe made 65 metres with ball in hand and beat four defenders.

Our second Chief, and second in the back-line, as out-half Simmonds pulled the strings to fantastic effect in victory at Sale.

The No 10 picked up the man-of-the-match award as he constantly put Exeter in the right positions around the park, kicked reliably off the tee - five of his six efforts bisecting the posts - and split the Sale defence for Hogg's crucial try with a sumptuous, and brave piece of playmaking, sucking in Manu Tuilagi to release Woodburn.

Scrum-half proved a difficult position to pick this week, with no overtly obvious candidate.

Making his first start for Wasps though, Vellacott played for 76 minutes as they came from 11 points down to beat Worcester 32-17 at the Ricoh Arena.

Within the game, the lively half-back chipped in with six tackles and six carries, the latter of which yielded some 42 metres in attack. He also beat three defenders and made a clean break in a promising display.

Bath put on a superb performance away at the Leicester Tigers on Saturday, winning 38-16, in a game in which all three of their front-rowers scored tries.

The pick of the bunch came from loosehead Boyce, who ran in from 20 metres as part of a fantastically rounded display. The prop also made 10 carries, beat one defender, contributed five tackles and was part of a scrum effort which yielded two penalties and a free-kick.

On the field for 67 minutes of his side's superb win over Ulster on Sunday, hooker Heffernan put in a brilliant performance.

The front-rower made 15 carries and 18 tackles - both statistics the most of any Connacht player on the day. He also failed to miss a single tackle, beat two defenders with ball in hand and landed all five of his lineout throws to finish on 100 per cent for accuracy.

Reds tighthead Tupou is fast turning into one of the premier players on the planet, with performances which belie his position of prop forward. 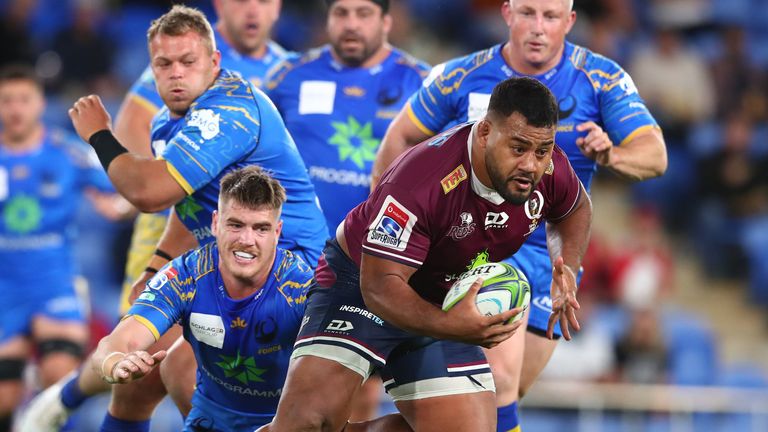 The Wallaby made 45 metres with ball in hand against the Western Force on Friday, placing him in the top five for players from both teams, while he also earned one turnover, made eight carries, two clean breaks, beat four defenders and finished as part of a pack with a 100 per cent record at scrum time.

Having performed for 72 minutes of a crushing 57-5 win over the Force, it's clear that Tupou is no ordinary No 3.

Having lost to Bristol on their Premiership return last week, defending champions Saracens returned to Allianz Park on Saturday and returned to winning ways with an 38-24 victory over Harlequins.

The standout was second row Itoje, who put in the sort of world-class display the rugby world knows he can produce.

The lock made 13 tackles, earned two turnovers, forced one clean break, scored one try, created another try for Alex Lewington and absolutely dominated at lineout time: claiming seven balls, while stealing three others.

Alongside Itoje is another Saracens lock in Isiekwe, but one on loan at the Northampton Saints.

Making his Saints debut in a 27-3 win at London Irish on Saturday, Isiekwe was brilliant as he made 15 tackles - the most of anyone in the match - and missed none, made one turnover, conceded zero penalties, took five lineouts and stole another two lineouts.

At the end of the victory, the lock was collecting the man of the match award.

One of the performers of the weekend, Reds flanker McReight was everywhere in victory over the Western Force.

He also earned one turnover, beat four defenders, made one clean break and scored a try.

Bristol's victory at Gloucester was a super day for their new signings as flanker Earl - on loan from Saracens - kept up his stellar form this season.

The openside made 10 tackles, seven carries, one lineout take and one lineout steal in the win, while he also beat three defenders with ball in hand and forced three turnovers.

Across world rugby, the breakdown - and specifically the threat and success of a jackalling player in defending teams - has been policed differently since the sport's return.

Nowhere has a player attuned to the new refereeing like Munster's Stander did at the Aviva Stadium on Saturday though, as the No 8 put in a breakdown masterclass against Leinster.

Stander earned some five turnovers at the breakdown, was unlucky not to earn another as team-mate Stephen Archer was penalised for lying on the wrong side, and also recovered a loose ball to turn over possession for a sixth time.

In addition, the Ireland back-row made 16 carries - typically the most of anyone - and 10 tackles.