England head coach Jones handed 12 players their debuts for the national team in the 43-29 win over the USA. "Now it's about how hard they want to work to keep improving," he said

Eddie Jones has challenged England's "historic" 12 new caps to earn the right to build on their Test debuts.

England overcame the USA 43-29 at Twickenham on Sunday, handing out the most debuts in one match since 1947.

Two tries from Joe Cokanasiga helped set an unfamiliar-looking England to a 43-29 victory against a spirited USA side.

Jamason Fa'anana-Schultz, Cam Dolan, Hanco Germishuys and Christian Dyer forced scores for the spirited USA in a match that broke up considerably in the second half.

Jones was delighted to blood an entire new generation of England stars, with a host of senior men either rested or on tour with the British & Irish Lions.

"It was a historic occasion, with 12 new caps for England, 10,000 people back in Twickenham, and a few of the players could see their families while they were singing the national anthem," Jones said. "So, it was a great day for the sport.

"The first half, we were very good, we put ourselves in the position to win the game, which is the most important thing first of all. Then in the second half we got a bit loose, a bit inconsistent and dropped off in a number of areas. 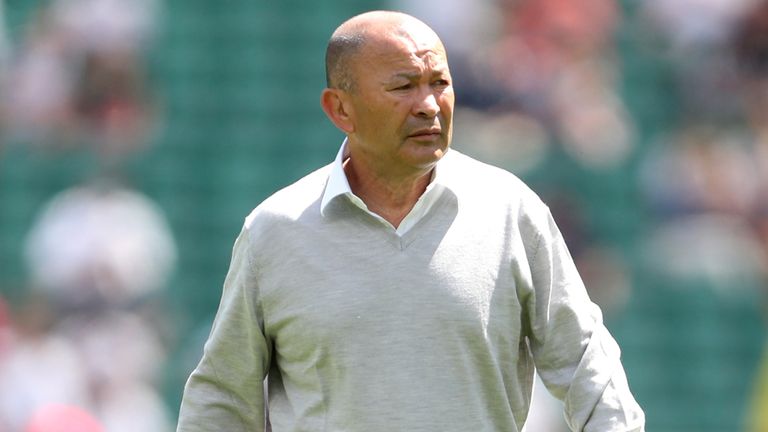 A lot of new players have had a taste of Test rugby now, and now it's about how hard they want to work to keep improving.

"A lot of new players have had a taste of Test rugby now, and now it's about how hard they want to work to keep improving."

England's decision to select just two backs on the bench forced major reshuffles when Max Malins and Lawrence succumbed to injuries. Malins suffered an AC joint shoulder injury, while Lawrence was forced out of action with a head injury.

England boss Jones insisted that was merely bad luck, though that pressed half-backs Dan Robson and Jacob Umaga into action out of position.

"That's just the way the game is, you always roll the dice a little bit going six-two on the bench," Jones said.

"But Dan Robson did a great job for us on the wing. He showed amazing pace and looked quicker than our other wingers, and he acquitted himself well.

"Obviously to lose Malins and Lawrence was just bad luck. Malins has an AC joint injury, so he'll probably be out for a couple of weeks but that's just an estimate.

"Lawrence had to go for an HIA which meant he couldn't return to the game but now he looks back to full fettle.

"So, he'll go through the return-to-play now and see if he can recover in time for next week. It's unlikely but we'll just wait and see."