The Rugby Football Union, Premiership Rugby and the Rugby Players' Association have launched an action plan aimed at reducing head impacts and concussion risk in both elite rugby union matches and training.

The action plan sets out how science and technology is being used to evolve thinking to optimise player welfare and brain health for prospective, current and past players.

An expanded focus on head impact exposure sits alongside ongoing work to enhance the standard of head impact and concussion management within the professional game and the introduction of a new brain health assessment service for retired elite male and female players.

The area of primary prevention will feature the use of "smart mouthguards" during the 2021/22 and 2022/23 seasons, with the RFU requesting that all 13 Premiership clubs use them in a bid to create new limits for contact training - Harlequins men's team and Bristol Bears Women have already trialled the technology, which allows staff to monitor head impacts in real time. 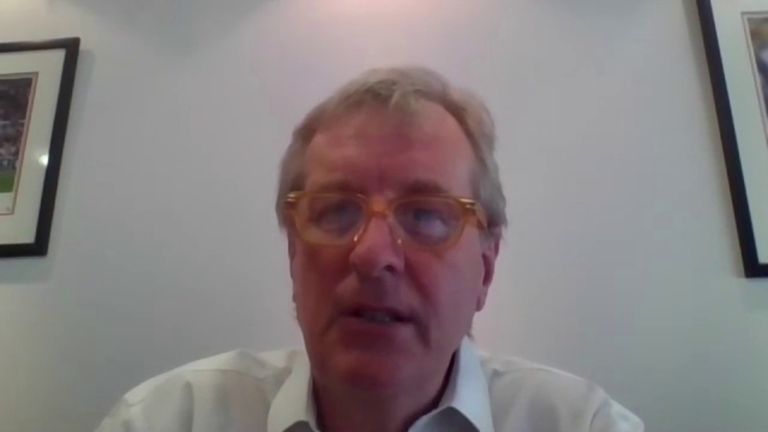 Secondary prevention will include implementation of World Rugby's Graduated Return to Play protocols and Independent Concussion Consultant reviews, as well as the use of real-time Hawkeye videos to assist Head Injury Assessments in the women's Premier 15s, as well as restarting saliva sample collection in the men's game (and starting it in the women's)

And there will be a tertiary prevention scheme for players after their careers have come to an end, with The Advanced BRAIN Health Clinic set to open in London later in 2021 enabling assessment and management of any former player between the ages of 30 and 55 who have concerns over their brain health.

The RFU's medical services director Dr Simon Kemp told Sky Sports News: "Based on our experience with Harlequins and the mouthguards, there was a very high interest from players and the coaching staff just to understand what their training intensity meant for them.

"They were very used to understanding running loads, GPS data and acceleration and deceleration loads. What the mouthguards give them is an idea on the impact and the head accelerations.

"Both clubs reported very positively about the use of this in the club setting, aside of the research value."

RPA chief executive Damien Hopley is convinced the sport remains at the sharp end of concussion research and safety but admitted there was likely to be concern from some of his constituents into the results of a study from Imperial College which showed a fifth of elite players showed signs of abnormalities to the brain's white matter.

The Drake Rugby Biomarker Study, which involved the RFU, investigated 44 elite players between July 2017 and September 2019 and results of second scans on almost half of those, taken a year after the first, revealed 23 per cent showed abnormalities to their brain cells.

Hopley said: "Obviously this sets the hares running. Clearly it's going to be a headline that will scare certain players but we have to take it in the round of what's currently happening, make sure we are looking at all of the available research and making informed answers on the back of it.

Hopley also believes current players would be in favour of a reduction of full contact work done in training.

He added: "Based on conversations we've had, I think player would welcome that. It's about how we manage that, how we do that appropriately, marrying the medical data we've talked about.

"Trying to give certainty on what is contact, clarification and regulation around that is an important step forward."