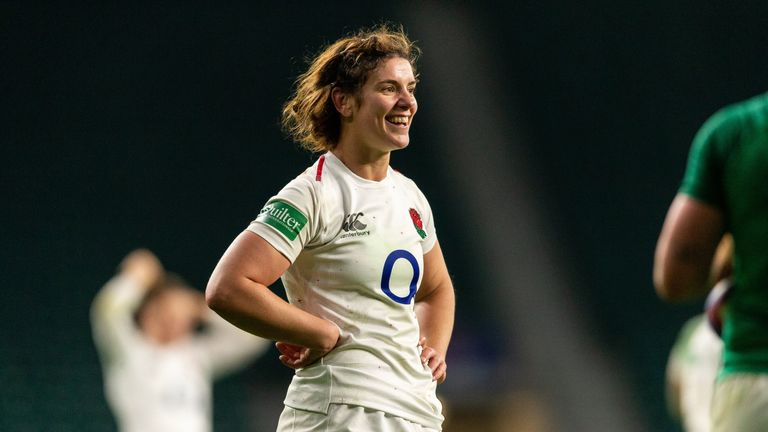 Sarah Hunter says England Women's first full-time contracts are not affecting their mindset ahead of the Women's Six Nations, live on Sky Sports.

The 35-strong 2019 Elite Player Squad includes 28 full-time professionals, the first to be awarded in the 15s game by the Rugby Football Union, with seven further players who will come into England camps and training but not join the full-time programme.

While long-time captain Hunter hopes the contracts help strengthen the squad in the long term, she says the team are fully focused on performing well in the tournament, which gets underway as Ireland host England on Friday.

"Regardless of whether we are professional or aren't, we've always been about winning and we've always wanted to win trophies and win games.

"We know that didn't happen last year and we really want to put that right this year. Yes, professionalism does help but we're still very new to professionalism.

"It will take time for that to click and I think you'll see over a period of time that getting stronger, but potentially in this block of time quite quickly, we won't see the finished article."

"There's no difference to us that we will want to go and win and that expectation for us individually, and collectively as a team will be to go out to win games and put in good performances.

Hunter, who has 108 caps for her country, also described the some of the team's preparations as they look to reclaim the title after narrowly losing it to France last year.

"Last week we trained against Bath University boys, so we did set-piece [training] and then a team run through against them," said Hunter.

"They're obviously a bit quicker than us so then the intensity and pace we have to play at is raised so that was a really good session for us.

Hunter added: "We did some it of (playing against men) in the build up to the 2017 World Cup, and we found it really beneficial.

"Simon (Middleton, head coach) and the coaches have said it's really good learning for us, so we're going to try and do that again in the full-time programme."