Kolisi, who made history as the Boks' first Black captain when he led them onto the field against England in June 2018, guided the side to glory in the World Cup a little over a year later in Japan.

The final against England was Rassie Erasmus' last as head coach of the Springboks, stepping into a role as director of rugby in a move that saw Nienaber promoted to head coach. However, Nienaber is familiar with the Bok talisman after first meeting him while coaching at age-grade level.

"I've known Siya since he was 19. He came to Western Province and started playing there," Nienaber said on Will Greenwood's Lion's podcast.

"To see his growth, from starting there, the young student coming in just enjoying life as a 19-year-old - he was captain of our Western Province Under 19 team back then, so he had a good leadership style on him back then - then him becoming a father.

"So since he was a student; full of life and energy, naughty, I've known him from that day, but he's always been a level-headed bloke.

"He's not a selfish guy, he doesn't have an ego. To come from where he has come from, he must have had a massive work ethic.

"Where he's come from, and where he's gotten to, he must have been a very driven guy. When I got him at 19 he was already driven and you could see he wanted to go places.

"That's Siya in a nutshell. He's a special individual and human being. Good captain and good rugby player and all that, but a very good human being." 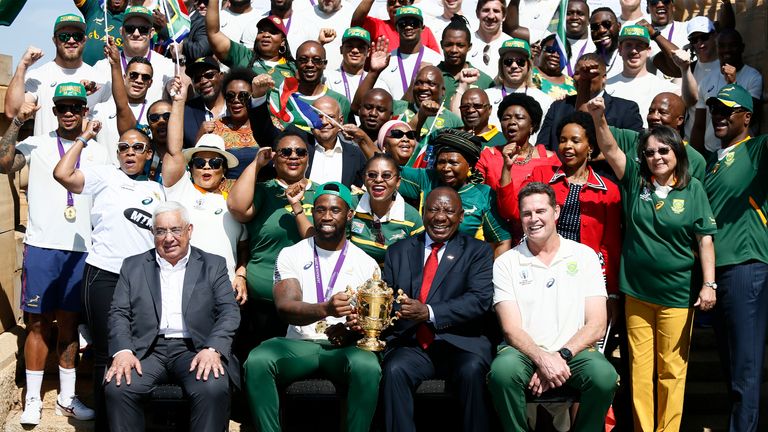 Nienaber's relationship with Erasmus goes even further back, the pair having met during their compulsory time in the South African army before conscription was scrapped in the country.

Nienaber and Erasmus' World Cup win was the culmination of well over a decade working together, and the former says the key to their successful relationship is that they always look for solutions together whenever they disagree.

"Whenever we disagree, we always say that it's not personal at all," he said. "And we never disagree and then afterwards say: 'I told you so'.

"You never disagree to be right; you disagree or agree to see the best thing happening for the Springboks.

"That's where we struck it from the word go."

The Springboks eased to a 32-12 victory against England in the final in Tokyo nearly two years ago, but were run right to the line in their semi-final against Wales, a game which was dominated by kicking throughout. Nienaber said he and Erasmus were locked in debate in the lead-up to the game before a "lightbulb went on" and Nienaber's opinion changed.

"A classic example was in the semi-final of the World Cup, where Rassie didn't agree with what I was seeing on the Monday in terms of our kicking-game strategy," he said.

"It took us probably two hours to get aligned, but we won't get frustrated - we will talk it over, mull it over.

"I was presenting something and Rassie said 'I just don't see it'. I tried to explain it again and again because I was seeing it in my head.

"Then he mentioned something, and a lightbulb went on and I said 'hang on a second, let me just go back'.

"I went back to a couple of other times that I've analysed Wales. I went as far back as 2018, then I said 'Rassie, you're spot on. I now get what you're trying to say'.

"He won that one - or, he enlightened me. I got to see what he was seeing and then we got to a solution. There wasn't a winner in the argument, I just saw the light!"

Will Greenwood is hosting a weekly Lions podcast ahead of Warren Gatland's tourists taking on the world Champion Springboks over the summer - all the games from the 2021 tour will be shown live on Sky Sports.