Ashton Hewitt: Dragons winger angered by racist abuse but will continue to speak out

Ashton Hewitt has spoken out after Dragons Rugby reported an 'abhorrent' incident of racist abuse directed at him on social media to Gwent Police, who have confirmed they are investigating; Hewitt tells Sky Sports News he is angered but has vowed to carry on calling out social injustice 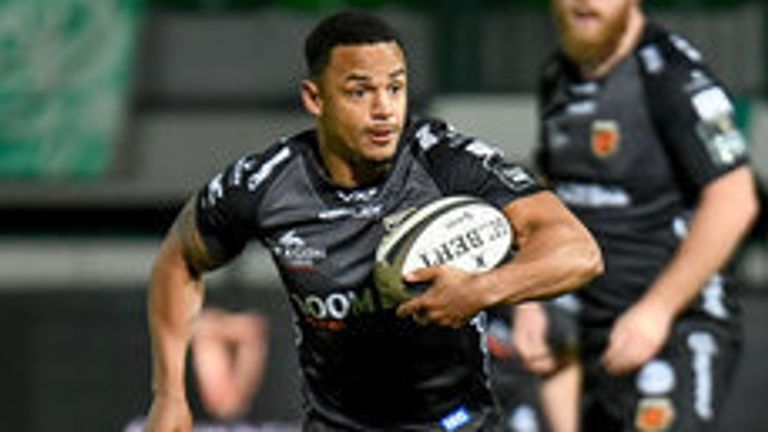 Dragons winger Ashton Hewitt says he is "angered" at racist abuse aimed at him on social media but that it will not stop him speaking out about social injustice.

Hewitt posted a screenshot on his Twitter account on Friday night, which appeared to show racist abuse on the profile of another user that had tweeted at him. Hewitt wrote: "This is what a Rugby fan somewhere (in Wales I think) wants me to see after a game."

The incident occurred following the Dragons' defeat to the Scarlets in Llanelli on New Year's Day. The 26-year-old from Newport has been a vocal supporter of Black Lives Matter and the ongoing global anti-racism movement.

Asked about his emotions, Hewitt told Sky Sports News on Saturday: "Anger, if I'm being honest, frustration. I've got a little bit used to it following the protests and the Black Lives Matter stuff I've been pretty vocal on over the past few months.

"I've had quite a lot of abuse on social media and it's been quite hard to deal with but this is the first time I've had it really in relation to a performance and people, or a particular person, attacking me racially to do with rugby.

"So it's a pretty new experience in that sense but it's not my first encounter with racism and trolls on Twitter, so not a huge surprise but it's upsetting and it angers me, to be honest with you.

"It's just hard. The only reason I'm having to face it is because I've been so vocal about racism on Twitter and it's sort of made me a target, so I've got a little bit used to it. I've expected it a bit more but it doesn't mean it gets any easier.

"Every time you get it, it's another battle. Sometimes it's hard to comprehend why people feel the need to attack me with racial abuse and it's just draining.

"I go through stages. There'll be points whether I'm receiving abuse or not where I'll be motivated to carry on talking because I know how important it is, but then there are days when you think, 'oh my God, am I even getting anywhere?'

"By speaking out, is it worth the hassle? Is it worth all of the emotions I go through? And I'll be honest, I do have those days.

"But there's also overwhelming support on Twitter as well as the dark side we've all seen so to be fair that's really encouraging and it gives me motivation to keep talking out, and it just highlights how important it is to talk out."

Thank you to everybody for the support, from supporters to teammates, my club and those of you that don’t know me - it’s encouraging and means a lot.

The PRO14 side released their own statement on Saturday in support of Hewitt.

"Dragons finds all forms of discriminatory behaviour totally unacceptable and we condemn it in the strongest possible terms.

"The individual who expressed these views does not represent the values of our game. We thank supporters who have also condemned this post on social media and shown their support for Ashton.

"Dragons take all reports of hate crime extremely seriously. Such behaviour has no place online, in our stadium, in our community or in our game.

"As a region, Dragons Rugby celebrates equality, diversity, respect and inclusion, we firmly stand behind Ashton and continue to fully support his outstanding efforts when trying to eradicate racial prejudice wherever it exists.

"This is a constant battle for Ashton and the region recognises how difficult the past few months have been for him. The matter has now been reported by Dragons Rugby to the Police."

Gwent Police confirmed they are investigating the incident and have appealed for anyone with information to come forward.

Chief Superintendent Tom Harding said on the force's Twitter account: "We were contacted by Dragons Rugby on Saturday, January 2, reporting offensive material published on social media in relation to one of their players.

"Officers are investigating and have spoken to the player and the club.

"Gwent Police take any allegation of racism and discrimination extremely seriously. There is no place for hate crime in Gwent.

"We are committed to ensuring our communities are safe places and welcoming for all. Anyone with any information which could assist the investigation is asked to call us on 101."