Watch the Rugby Championship live and exclusive on Sky Sports

The All Blacks kick off the defence of their title against Australia in Sydney on August 18, live on Sky Sports, but before that we take a look at the state of play in New Zealand and analyse their chances of a third straight success.

New Zealand continue to set the standard for others to follow with just one defeat in their 13 Test clashes since the memorable drawn series with the British & Irish Lions last year, underlining their status as the world's No 1 ranked side.

That run of form included a clean sweep of their Rugby Championship rivals with a humiliating and historic 57-0 thrashing of South Africa in North Harbour the clear pick of the results from that year - or any year.

The Boks bounced back and suffered just a one-point defeat in the return fixture to offer some hope for the rest of the world and Australia exposed further chinks in the All Blacks' armour with victory in the third and final Bledisloe Cup clash of the year.

However, the sizeable silverware was already safely tucked away at New Zealand HQ thanks to their two earlier victories over their cross-Tasman rivals.

Usual service was resumed on the All Blacks' end of year tour of Europe where they recorded victories over France, Scotland and Wales and there was also a hard-fought victory for an inexperienced New Zealand side against a France XV in a rare mid-week outing.

HAKA! The moment when Jackson Hemopo, Jack Goodhue, Richie Mo'unga and Shannon Frizzell perform the All Blacks haka for the first time in a Test match. 🇳🇿🖤 pic.twitter.com/d37YGm9Jbk

France were put to the sword once again as the All Blacks warmed up for the Rugby Championship with a 3-0 series whitewash in June - running in 19 tries in the process.

New Zealand have dominated the Rugby Championship since Argentina were invited to join the party back in 2012 with five titles. The only time they missed out on the glory was in 2015 when they responded by going on to win the Rugby World Cup.

But, that only goes a little way to illustrating their consistent excellence in arguably the toughest championship in world rugby.

By comparison, the Wallabies have suffered 15 defeats in the same period, South Africa have 16 losses to their name and Argentina have been on the wrong end of the result on 29 occasions.

Australia may have bloodied the All Blacks' nose in the final Bledisloe Cup clash last year but the Rugby Championship remains a barren hunting ground for the Wallabies, Springboks and Pumas with New Zealand currently riding a run of 12 straight victories.

New Zealand's dominance of the Super Rugby stage also continued this year with four of the country's five franchises - Crusaders, Hurricanes, Chiefs and Highlanders - qualifying for the knock-out stage.

The Chiefs finished third in the New Zealand conference with 49 points - a total that would have seen them top both the Australian and South African conferences. 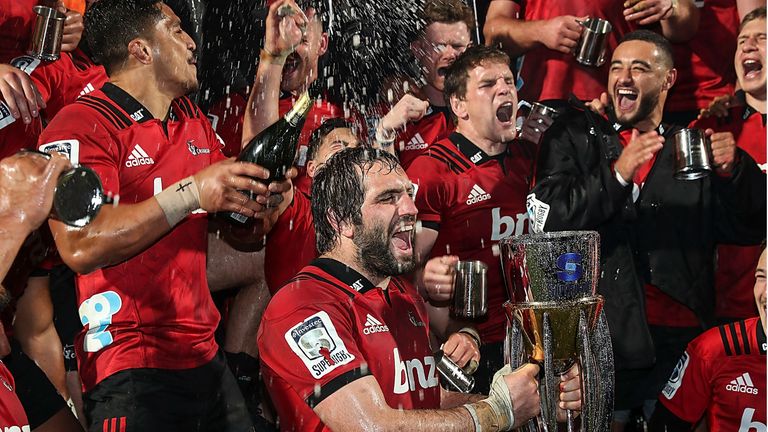 And the Crusaders were crowned champions for the second year in succession, having looked in imperious form towards the climax of the Super Rugby season, comfortably dispatching the Lions 37-18 in Christchurch in the final.

The club game couldn't be providing a stronger platform and conveyor belt of talent to lead into the Test side.

Centre Sonny Bill Williams has been included but is ruled out of the opening two clashes against Australia as he continues his recovery from a shoulder injury.

Williams missed the first two Tests against France in June with a knee injury and hasn't played since damaging a shoulder joint in the third Test.

Hooker Dane Coles is another fighting for fitness having missed the entire Super Rugby season through injury.

The 31-year-old, who missed much of 2017 due to concussion-related issues, ruptured knee ligaments against France last November and has since undergone two operations to repair the injury.

He will continue his rehabilitation with Wellington in the Mitre 10 Cup and is likely to return to the selection mix when he has regained his match fitness.

Highly-rated Crusaders flanker, Jordan Taufua, misses out once again through injury having broken his arm in their Super Rugby semi-final victory over the Hurricanes. This latest blow comes after a calf injury denied him an All Blacks debut during the recent series against France.

Another name missing is veteran Crusaders full-back Israel Dagg who has signed a short-term contract with the Canon Eagles in Japan after an injury-blighted season, which has been ruled out of contention.

Back row forwards Vaea Fifita and prop Jeff Toomaga-Allen have been left out of the squad by Steve Hansen, while hooker Liam Coltman and centre Ngani Laumape are only included as injury replacements to cover Coles and Williams respectively.

There isn't room for the Crusaders trio of George Bridge, Bryn Hall or Matt Todd while props Kane Hames, Nepo Laulala and Atu Moli, along with Taufua not considered due to injury.

"At the moment in New Zealand Rugby we’ve got a lot of talent and two things come from that. One is some good players miss out and the second thing is it gets rid of any complacency amongst those that do get selected." - Hansen pic.twitter.com/do5P2qPp2q

In terms of props, Crusaders loosehead Tim Perry gets another chance to push for a Test debut, as will scrum-half Te Toiroa Tahuriorangi, who was included in the squad against France.