Watch Heather Fisher in the new series of My Icon, showing on Wednesday at 6.15pm on Sky Sports Mix (Sky channel 121). All episodes of My Icon are available On Demand

From battling anorexia to alopecia, from a career-threatening back injury to coaching rejections and a stint in bobsleigh, England international rugby player Heather Fisher shares her story...

At 34-years-old, Fisher can look back on a career which has seen her thrive in both XVs and Sevens, winning a Rugby World Cup in 2014 and fulfilling her dream of competing at an Olympics in Rio in 2016.

But it has not all been plain-sailing. On the contrary, Fisher's has been a path to the top which has thrown up a wealth of pain and more challenges than most will experience in a lifetime...

'I never fitted in anywhere'

"My earliest memory of sport is probably being on my bike. As a youngster, to escape my family at home, the way I dealt with childhood was to put a pound in my shoe, take myself off on my bike and the aim would be to get lost," she told the latest series of My Icon.

"And then if I got lost, I would always be able to phone home.

"I found home life pretty hard. My parents went through an early divorce. I never really fitted in anywhere that I went. I wasn't that normal average kid where I was stable in a family environment.

"It was just my way of dealing with it, to take myself off, better myself in fresh air and know that whatever was going on elsewhere, I was on my own track, my own mission. 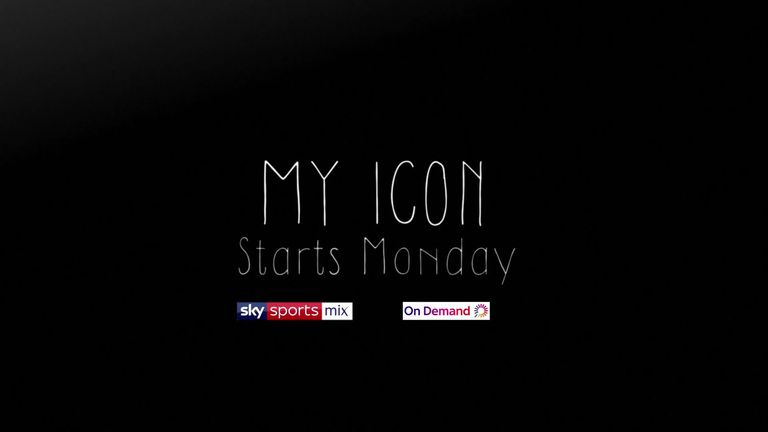 "I remember watching the Olympics as a child, and watching [Steve] Redgrave and thinking: 'That's what I want to do'.

"If anyone ever asked me what I wanted to do, I would just go quiet. I knew within me that I was training to be an Olympian from a really young age, I just didn't know what sport. And I didn't really know if I was ever going to get there. But I used to train like I was.

"It wasn't until I hit anorexia at a very young age, that a nutritionist asked me what I wanted to do, and I said an athlete. He replied: 'Well Heather, if you don't eat, you'll never become an athlete', and those words have never ever left me.

"I think people look at me now and they can't really think of me as being anorexic.

"There's no pictures of me because I was literally skin and bone. I remember I would have arguments every day with my mum and I would need help, but not take help. Wake up, need help but then not want help and then rebel help. I would be offered £50 for half a sandwich, but I wouldn't do it.

"It got to the stage where I couldn't take part in PE, I wasn't allowed to walk to school, I couldn't cycle to school, my bike was taken off me, everything was monitored.

"My sport made me who I am. It's defined me in terms of my character, it's tested me for sure about my character.

"It's put me in some really hard places, but also in some amazing ones and I wouldn't change any of it. It's hard work but when you sign up to be athlete, nobody says it's going to be easy."

'Have we even got a bobsleigh team?'

A combination of having watched Jonah Lomu run over the top of people for New Zealand across the television, and having first passed a rugby ball in the garden with her step-father saw Fisher hooked on the oval ball.

She feared contact but loved the game. Even when she'd found her sport, however, obstacles were still thrown up...

"I actually got dropped from England quite early on in my career and it was not about performance but actually about the fact that I let the small things slip," she said. "I had a phone call to say: 'Look Fish, you played well but I'm dropping you for this season'.

"I couldn't really believe it because I knew I was playing well and I knew what I could bring. It was one of those moments where you sit back and go: 'Okay, I get it. I have a choice now, I either run away or I sit and deal with it'.

"Then someone came up to me and said: 'Would you mind me asking what sport you do?' And I said: 'England rugby'. They said: 'Would you fancy trialling out for GB bobsleigh? We're looking for athletes to attend the 2010 Winter Olympic Games.

"I went to Bath University and did a few jumps, a few tests, and thought, actually, I've got an opportunity. My aim was always to be at an Olympic Games.

"I then felt the need to be bloody good at bobsleigh, and to love it! I remember going out to Lake Placid and my first run was like: 'Oh my god." There's no going back once you've been pushed off!

"It was the scariest thing I've ever done in my life. The craziest thing, but it was the makings of me in terms of an athlete because it gave me my pure raw power off the top, which I then transferred to Sevens.

"Around 2008/09 I'd just been pulled for bobsleigh, was pretty burnt out and didn't want to do anything. I had six months away from all training - I didn't want to see a gym.

"And then I had to kind of make a decision about whether to go back to bobsleigh because we were now a year away from the Olympics.

"But then I also had a call from Simon Amor and he said: 'Right Fish, we're starting a Sevens team, we've got a Sevens World Cub in 2010, do you want to come and have a go?'

"And I said: 'Why not?!' So I went Sevens training, and that was really hard in itself because for the previous three years, I'd been used to sprinting for no more than seven seconds.

"But it was like dipping my toes in the water and I came away from that first training session thinking: 'This is cool, this is a challenge because I have to step my game up to repeat power'.

"My mum wanted me to go down the bobsleigh route, but my heart was in rugby."

The summer of 2011 brought more issues as Fisher suffered a career-threatening back injury in a freak accident on the pitch.

At just 27-years-old, she thought her time in the sport was over for good...

"I went up for a ball, caught it and I sort of landed on my knees, facing forward, with the ball and my arms behind my head, and I just knew I was hurt.

"That was a really scary moment in my career. I thought it was over.

"We came back home, had a scan and I had one fracture in my back.

"To cut a long story short, that fracture then led to two, three and four fractures in my back. I was put into a plaster cast from my neck down to my waist for a year, all strapped up.

"I started losing my hair, my body shape completely changed as I put on a lot of weight, I was stuck in this plaster cast and life was pretty c**p. I couldn't see where I was going to be.

"We decided not to go down the route of an operation and I went to RU - the international rehab unit in Bisham. I was in amazing hands with a lady called Julia, who took me under her wing and rehabbed me until I was back walking, running and playing.

"In the back of my head, I always had this thought that we'd never scanned it since. We'd never scanned my back since coming back from the injury and what if I get hit and those fractures haven't healed.

"We had a conversation about it and I guess it just hit home with me that I need to try and if I don't try, I'll never know what I could ever be in rugby.

"I remember standing on a pitch with my hands on my hips and thinking: 'I'm not ready, I'm not ready, what if I get hit', and then I got hit and I was okay, I was actually okay."

"The alopecia's a funny one because I've never really accepted it. I still don't, I fight it every day.

"Being a player and an athlete, you're in control of so much and I know what drives me, what makes me tick, when I need to hold back or put the gas on. I know all that, but the one thing I can't control is my look and my hair, and I find that really difficult.

"People thinking you're a guy instead of a girl, or like earlier today I got: 'Sorry, you're in the wrong toilet, the wrong changing room', And I go: 'No it's okay, I'm a female actually.'

"People are rude. I had a lady in Hong Kong shove a broomstick into a toilet to try to get me out.

"If my voice can reach out to any other person with alopecia and help, guy or girl, then I'm all about that because it is so tough.

"For a female especially, to lose your hair, it is your identity. My hair was a part of me, I loved my hair. It was really hard, I wouldn't go out for years because of my head.

"I love a challenge, and I think that's what it comes down to. If somebody says I can't, then I will. It's just like that.

"I'm value driven. I'm not driven my medals or World Cups or Olympics - they are awesome things to be a part of but actually being true to yourself, being honest, working hard, being brave, helping others grow, helping myself grow and overcoming challenges, those values are bigger than anything else you will go and do in life."

Don't miss the My Icon Sportswomen special, starting from Monday on Sky Sports Mix - the whole series will also be available On Demand, as are all the episodes from previous series.