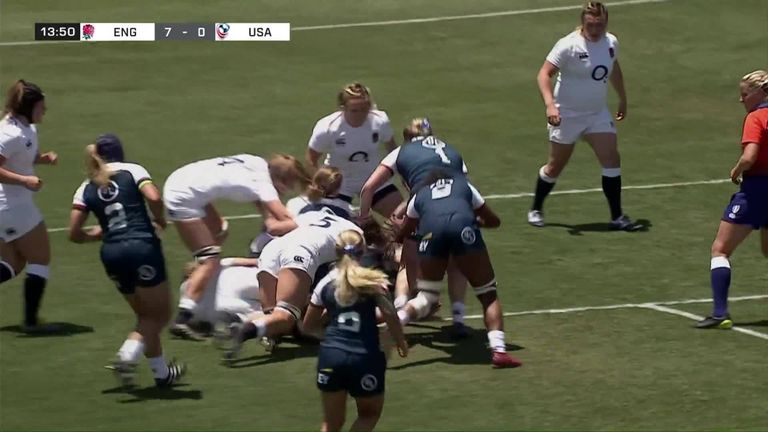 The Red Roses started their 2019 Super Series campaign with a bonus-point 38-5 victory over the USA Women's Eagles on Friday.

The Red Roses, despite taking some time to settle, held a productive 26-5 advantage at the interval and surged out into a 33-point lead with a quarter left to play.

Emily Scarratt showed her experience throughout, finishing with a tally of 13 points, and defensively the Red Roses held firm to contain their opponents to a sole score from Hope Rogers.

The squad will now have a bye match-day and prepare to face Canada next in eight days' time, live on Sky Sports, before matches against France and New Zealand.

England's opening try arrived after eight minutes through a glorious piece of work from centre Amber Reed, on the occasion of her 50th cap.

Reed spotted acres of space on the left-hand side and launched a cross-field kick into it. No 8 Poppy Cleall snatched it off the bounce and neatly offloaded to winger Kelly Smith, who strolled in.

Scarratt added the conversion but the Red Roses' seven-point lead was short-lived. The USA struck back five minutes later as prop Rogers, who was playing in her first XVs Test match since Rugby World Cup 2017, powered over from close range.

As the opening half continued, the Roses weren't as clean with their discipline as they have been previously this year and seemed to be sucked into the USA's game plan.

However as their set-piece started to fire, more points arrived and scrum-half Claudia Macdonald took advantage.

Macdonald was marking her first start for England and her sniping dart from 10 metres out also marked her first international try.

Scarratt, at the heart of England's calmer and more composed moments, duly added another conversion before securing a try of her own. As the USA tried to exit from their own half, the highly-experienced international plucked Gabriella Cantorna's looping pass out of the air and raced over unopposed.

With half-time approaching, the Red Roses pressed hard and following a few false starts Heather Kerr drove over for the bonus-point score and a 26-5 half-time lead.

In the scorching sunshine, the second half commenced with Alev Kelter delivering one of many exceptional moments for the home side. Alongside that, the Roses had to contend with Poppy Cleall being shown a yellow card.

Cleall's absence actually saw the pack grow taller in stature and before the No 8 arrived back on the field, Kerr grabbed her second off the back of a driving maul from a lineout.

Head coach Middleton chose to make a number of personnel changes in the second half and one of the new arrivals, Natasha Hunt, secured what would be their sixth and final try.

Hunt pounced on a loose kick from her Eagles counterpart and used her considerable pace to deliver the five-pointer.

Scarratt's fourth conversion extended their lead out to 38-5, where it would remain for the remainder of the encounter.