Fourteen years after first working together at Saracens, Andy Farrell and Eddie Jones will face off as opposing head coaches for the first time on Sunday afternoon.

Farrell is taking charge of Ireland for his maiden Six Nations campaign at the helm against England at Twickenham, and he's gunning to continue his perfect start and pick up a Triple Crown in the process.

As he attempts to outwit Jones, the rugby league convert has fond memories of working under the now-England supremo.

"He was there [Saracens] as a consultant when I first joined," he said. "We knew that he was coming to take over as head coach a year later and Alan Gaffney came in and Eddie came over a few times and then obviously took over. He re-signed me as well actually which I was grateful for. It was great to spend some time with him.

Farrell was a member of the England backroom team for the 2015 World Cup, that Jones deemed surplus to requirements when he moved from Japan.

However, Farrell native holds no grudge.

"I don't think it was my job anyway, I don't [harbour any grievances]," said Farrell. "I worked for Stuart [Lancaster]. And Stuart had left and I would have done exactly the same if I was Eddie."

As Farrell finds his feet as a head coach, he has consulted his predecessor.

"I spoke to Joe [Schmidt] a few times," he said. "It's always good to get a handle, obviously he's not been in camp or doesn't quite know what we've been trying to do, but it's great to get some feedback.

"He's been to a few games, he's watched the games and will be watching in a little bit more depth than other people so it's always nice to get a bit of feedback."

And the ex-England international is under no illusions as to the scale of the task that awaits his side on Sunday.

"We are in a good place. We are two from two. We know that our performance has to be better to win there.

"England have won one, lost one, so I suppose this is their championship. So you would say that they will have an edge about their game. We probably need a little bit more of that as well. 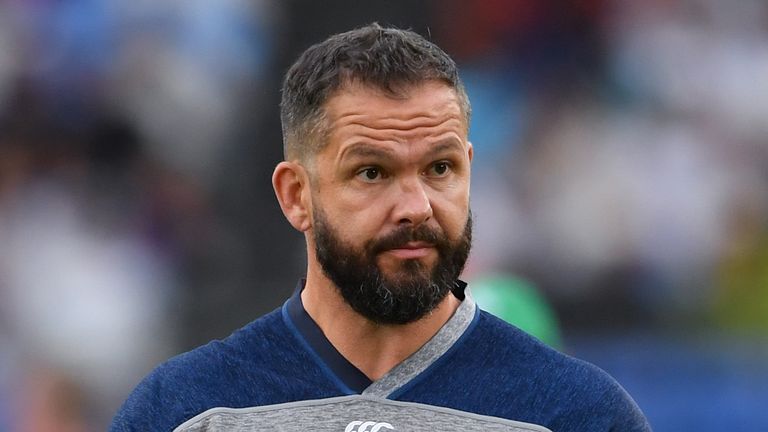 We are in a good place. We are two from two. We know that our performance has to be better to win there.

Farrell knows Ireland must up their game to win in London

"We feel we've had two physical games, the Scotland one was really physical and that did us the world of good going into the Welsh game. So, we know what type of game it is going to be, we know how England want to play.

"They play hard on the gain-line, try to win quick ball, winning collisions, etc. We've seen them do that with great success over a number of years.

"So, we know what's coming as far as that's concerned. We want to turn up and express ourselves in that way as well."