Jones: "I never thought coming here four years ago I would be doing a second four years but the circumstances are right" 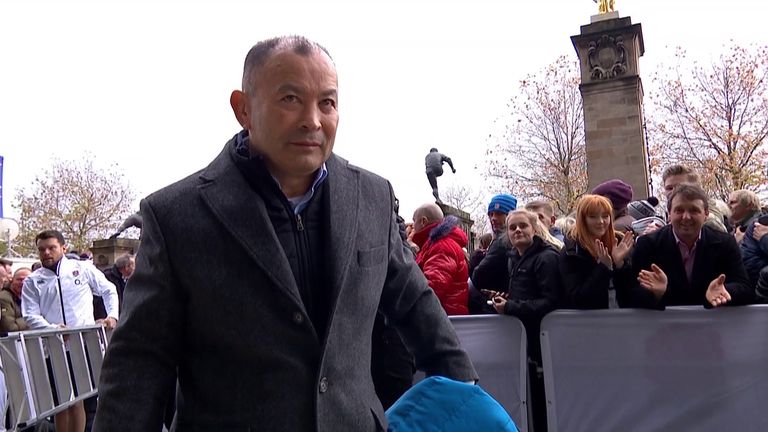 England head coach Eddie Jones has signed a new contract that will keep him in charge until the 2023 Rugby World Cup in France.

Jones, 60, was contracted until July 2021, but had been in discussions over his future since losing the World Cup final to South Africa in 2019.

He is the highest-paid coach in international rugby, with a salary of around £750,000, although he accepted a pay cut of more than 25 per cent last month following rugby's suspension due to the coronavirus pandemic.

After signing his new deal, Jones acknowledged the "difficult time" the world is currently facing and also admitted he did not originally plan to remain in the England job for so long. He said: "The extension is a great honour for me, but in the current environment it is only right to acknowledge what a difficult time the world is facing.

"We are all looking forward to a time when we can get back to playing rugby and use the sport as a force for good in bringing people back together.

"I never thought coming here four years ago I would be doing a second four years but the circumstances are right.

"Obviously it is important for the team that we keep improving and my focus will be solely on that."

Jones also repeated his aim of making England the "greatest" side in the history of the sport, saying: "I am excited about raising the standards again. We have a great team. We set out four years ago to be the best team in the world and unfortunately we missed that by 80 minutes.

"Now we want to be the team that is remembered as being the greatest team the game has ever seen. It's a big ambition but I believe we are capable of doing it.

"We have players with an enhanced reputation, we have a team that is expected to do well, so it's a great opportunity for us to keep moving forward."

As well as reaching the World Cup final, Jones has two Six Nations titles to his name since joining England in 2015, as well as the highest win ratio - 78 per cent - of any England coach.

"We've got to make sure we've got the right coaching team going forward," Jones added, refusing to rule out any further changes to backroom staff.

"Coaching teams are exactly the same as a rugby team, you've got to make sure you've got the right coherence.

"Certainly the Six Nations was a good start but we've got to keep assessing and keep looking to see how we can improve the coaching team, as we do with the team that actually takes the field."

He said: "In exceptionally difficult times, we are pleased to be sharing some good news. We are delighted that Eddie will continue as head coach to run England's campaign to take us to the 2023 Rugby World Cup.

"The progress shown by England since 2015 has been indisputable and having fielded the youngest-ever team to play in a World Cup final, we know even more growth is possible. We are all excited by what this squad can do and having Eddie leading the team is very important to us.

"We reached an understanding soon after returning from Japan but there were some things that we wanted to make sure worked for both sides."

'Timing of Jones deal is surprising'

Sky Sports News reporter James Cole says he is surprised the RFU has decided to announce a new contract at this time.

He said: "I think more surprising than the news itself is the timing. Eddie Jones is the best-paid rugby coach in the world.

"The RFU are currently going through a financial crisis because of the coronavirus. Premiership clubs are also cutting salaries by 20 per cent, the chief executive of the RFU has taken a pay cut, Eddie Jones himself has taken a pay cut.

"The RFU reckon they are going to lose £40m over the next 18 months so the timing is a little strange but the fact that the RFU has decided to give Eddie Jones another two years to take him through to the next World Cup isn't a massive shock in itself.

"That win over New Zealand [in the World Cup semi-final] was one of the greatest England performances ever.

"The news itself not a huge shock, the timing very very surprising."