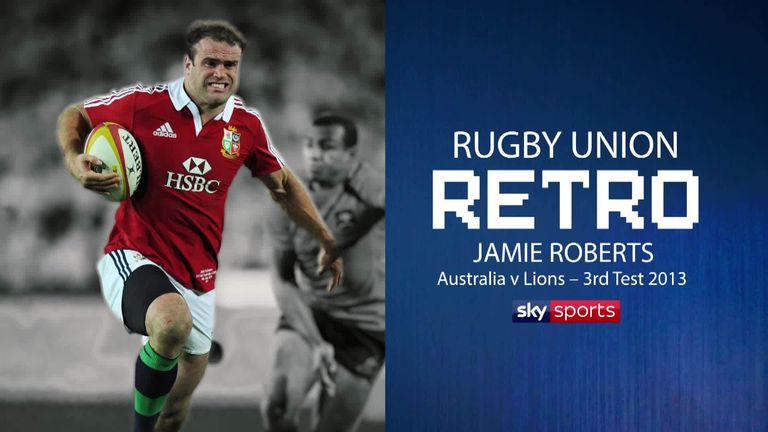 Ahead of the Lions tour of 2013, there had been calls for the famous invitational side to be scrapped but under Warren Gatland, the tourists went out and sealed a 2-1 series win over the Wallabies - their first since victory in South Africa in 1997 - winning the decider 41-16.

Roberts, who became a Lion in 2009 in South Africa, was one of the try scorers that day in Sydney in 2013, and recounts it as one of the best occasions in his career.

"I spent the last 10/15 minutes on the bench, because I scored a try and immediately after came off the pitch," Roberts told Sky Sports.

"I got to enjoy it with the lads and staff at the side of the pitch knowing we'd won. There was no way Australia were going to score 30 unanswered points.

"It was an amazing quarter of an hour to take it all in. The Olympic Stadium in Sydney was full and it was a very, very special time in my career, no doubt about that, and a special time for the Lions.

"When I think of the emotion of that changing room after that game, I switch back to four years earlier to Loftus Versfeld in South Africa, and the contrast was completely polarised.

"I find it hard to describe. Four years earlier, there was not a word said in that dressing room for a good 20 minutes and there was tears.

"Fast forward to Sydney and we've got James Bond - Daniel Craig - popping bottles with the lads, jumping up and down for about half an hour.

"That contrast for me, sums up rugby. It was just a very special week."

With Alex Corbisiero, Johnny Sexton and George North having scored tries to put the Lions in a commanding position, Roberts put the cherry on the cake when he sliced through on a textbook run to dive over.

"It's a line I'd run thousands of times in my career, not just in games but in training," he says. "And 90 per cent of the time I'd get absolutely levelled by two defenders.

"For it to open up on the biggest stage of all for a rugby player was dream-come-true stuff.

"Everyone ran their lines really well to sit the defence down and it just parted. To be honest with you, I can't really remember the rest.

"It was one of those moments, I ran over, put the ball down and it felt like I'd jumped into a swimming pool.

"There was just no sound, everything just went deadly silent. It was kind of really strange to experience that.

"I don't score many tries and I've not experienced anything like that in my career, it was pretty special."

That try, the Test victory and series win was all the more special for Roberts because he came perilously close to missing out on it all due to injury.

In fact, the odds were firmly stacked against him to be involved that day.

"I got injured the week before the first Test, my hamstring against the Waratahs, and I thought my tour was over.

"To this day I'm hugely grateful to the medical team, to Doc Robson and Prav Mathema [Lions physio], for having faith and keeping me on tour.

"It was a Grade 2 hamstring tear, probably should have taken five or six weeks, but they managed to turn me round in two and a half.

"And they told me straight away: 'We need you training by the Thursday of the third Test week.'

"I knew that I was going to have to play through a bit of pain with this. When you tear a hamstring like that, it's never going to be 100 per cent if you're playing within three weeks. I knew it was a balancing act.

"Here I was trying to balance that this is arguably the biggest game of my career vs am I going to be a hindrance on the team if I'm not fully fit?

"Gats (Warren Gatland) came up to me on the Thursday morning and said: 'Right, are you ready?' And it was a straight: 'Yeah.'

"We sat in the team meeting room and Warren just got straight to it. The lads sit down and he gets out the team on a piece of paper and starts reading it.

"You could have been in a little club game in mid-Wales somewhere playing for the fourth team, it felt like that. It didn't feel like a third, deciding Test in a Lions series!"

Roberts was one of the names on that piece of paper, lining out at inside-centre. But the headline news ahead of that third Test was the omission of one Brian O'Driscoll.

It was and remains the only time O'Driscoll was dropped in the entirety of his career. And not just from the starting team but the squad of 23 also. Roberts came in at 12, Jonathan Davies slipped across to 13 and Manu Tuilagi came onto the bench.

"The obvious change was Brian. I'd come into the side and Jonathan [Davies] had been playing well on that tour.

"Myself and Jon got onto the bus, he sat next to me and said: 'This is going to get interesting, I'm going to take some flak here.'

"Brian was brilliant. We trained that day and he was the first guy after training to come up to me, as you would expect from a man of his calibre and rugby experience, and said: 'Look, obviously gutted with selection, but anything you need or I can help you with, just let me know.'

"But to do that, whilst obviously being understandably devastated - and there's no doubt about that, that would have been a very, very tough time for him, knowing it was his last tour, his last chance to shine on the biggest stage - he handled himself with great dignity.

"That was a challenge to us. If a guy of that stature is getting left out of the side for us, it's up to us to raise the bar and play at a level acceptable to that decision, and we did."

When reflecting on that day, Roberts returns to a feeling of gratefulness.

Many others in his predicament would not have been given the opportunity to recover and return.

"I'm forever grateful to the staff and medical staff for getting me right for that game, because I thought my tour was over.

"I've watched the Living with Lions videos, in 1997 and 2001, of lads getting injured and being sent home. I thought that was me, I really did. I remember crying in the dressing room thinking: 'I'm that guy.'

"I just wanted to do proud the people who backed me to finish the tour.

"[The Lions is] so unique, it's so special. And I like to think when I reflect on those tours, those relationships will be lifelong and it brought the best out of me as a person."