Grace McKenzie, a trans woman rugby player in San Francisco, has launched a campaign opposing the ban; World Rugby has told Sky Sports News individual unions will be given greater flexibility over the rule A leading researcher into the science of transgender athletes is warning against banning trans women from women's contact rugby.

World Rugby's current policy on trans inclusion is in line with International Olympic Committee rules, but the governing body is proposing a revised policy due to safety concerns.

However, Joanna Harper, a PhD student and medical physicist at Loughborough University, has told Sky Sports News that the data upon which World Rugby is basing its new guideline is flawed.

World Rugby's proposal is based upon independent research which claims there is at least a 20 to 30 per cent greater risk of injury when a female player is tackled by someone who has gone through male puberty.

But Harper takes issue with the research, she said: "One of the most fundamental problems is that they used studies on non-athletic transgender women to form a large part of their thesis.

"The typical trans woman is more likely to starve herself to look like a model than want to build muscle. So when they go through hormone therapy, they don't lose a lot of muscle.

"They took this modest muscle loss of five to 10 per cent and compared it to the difference between typical male and female athletes. But you just can't do that. The data they are using simply isn't applicable in that manner."

But Dr Emma Hilton, a developmental biologist at the University of Manchester, disagrees: "Joanna is right. Nobody has studied muscle changes in transgender athletes.

"But what I think is unreasonable, is to think that transgender female athletes would lose more than transgender women in the general population.

A number of LGBT+ inclusion in sports bodies are also opposed to the ban - and are calling on World Rugby to conduct more research.

Karl Ainscough-Gates is Chairperson at International Gay Rugby, and says: "We need rugby-specific research. If there is a risk, base it on physique - don't base it on whether they're transgender or not.

"By banning trans players, you are pushing them out of this safe space which World Rugby invited them into five years ago." A worldwide online petition against the ban has over 17,000 signatures. It was started by Grace McKenzie, a trans woman rugby player in San Francisco.

"Rugby has had a hugely positive impact on my life as a transgender woman," she said.

"It's been one of the most inclusive environments I've found since my transition a few years ago.

"For someone going through transition - which can be isolating at times - that sort of supportive community is so important. It has been really beneficial for me and my mental health.

"The thought of losing rugby makes me feel awful. It makes me feel like a second-class citizen. Trans folks face a lot of adversity all over the world. This is just another attack on our opportunities to be included."

"We separate sport based upon biological sex. Because if we didn't women would be excluded from sporting life.

"They would be unable to win and at both amateur and professional level, women would be at serious risk of injury."

World Rugby's proposals will be voted on in November. 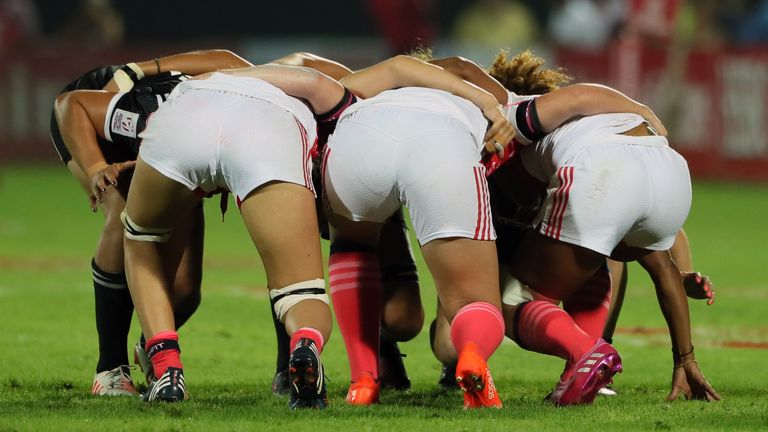 In a statement to Sky Sports News, rugby's global governing body insisted individual unions will be given flexibility: "The eventual guidelines will provide guidance for unions, recognising the possibility for a flexible approach on a nation-by-nation basis at community level."

While in England, the RFU has said it will: "Undertake a fair and thorough consultation listening to all evidence and views."​​