Ben Youngs to earn 100th England cap and Jamie George his 50th; Both players to lead England out at Stadio Olimpico; Exeter Chiefs' Jonny Hill to make debut at lock; England will win Six Nations if beat Italy and other results go their way

Scrum-half Youngs is set for his 100th cap, becoming the second-most capped England men's player after Jason Leonard, while hooker George will make his 50th appearance. 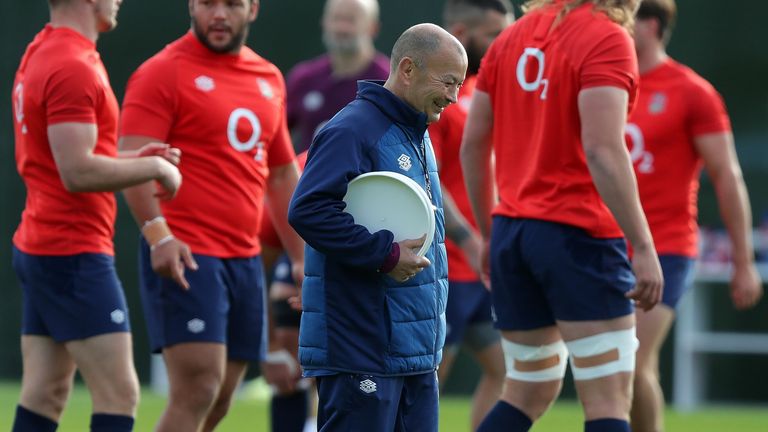 It's testimony to their skill, hard work and love of playing for England, and there is more to come from both of them.

"A good core of senior players and around 25 per cent of the squad are uncapped, some of them have played less than 20 club games.

"So there's a real diversity in the squad and we're looking forward to getting the squad to melt together and see where we can go with it."

Youngs made his Test debut against Scotland back in 2010 and Jones insists the Leicester scrum-half hasn't lost any of his desire to play for England.

"He's a great team man. He loves playing for England, he gives it everything he's got," said Jones.

"He's got a desire to keep wanting to get better and at his best he's a great running half-back. We're hopeful of seeing some of that on Saturday."

Jones believes George could following in Youngs' footsteps and also reach a century of Test caps, having spent the early years of his international career as understudy to Dylan Hartley.

"I think it's a great testimony to being patient as a player," added Jones.

"He was knocking on the door for selection when Dylan was starting and he kept at it. Since he has got his opportunity to start, he's got better and better. There's another 50 in him."

Youngs and George will lead the team out in Rome this weekend as England go hunting for a bonus-point victory which they need to retain their hopes of lifting the Six Nations title.

In total, there are seven changes to the starting line-up from the team Jones fielded in England's 33-30 win over Wales in their last Six Nations game pre-lockdown on March 7.

Injuries to Elliot Daly and George Ford mean George Furbank returns to the side at full-back, while captain Owen Farrell shifts from inside centre to fly-half.

That means Henry Slade comes into the starting XV alongside Jonathan Joseph, who replaces another injury victim in Manu Tuilagi - sent off against Wales - in midfield.

Jones goes into the match without a back-up fly-half among his replacements, with Wasps scrum-half Dan Robson the only other back in reserve for him to call on along with Worcester Warriors centre Lawrence and Gloucester winger Thorley.

"We've trained with good intensity this week and the squad are excited by the challenge of performing at our best against Italy," Jones added.

Correction: (29/10/2020: 11:52am) - An earlier version of this article carried an image of Joe Marchant, which was incorrectly captioned as Ollie Lawrence. The image was incorrectly labelled by our picture suppliers, however Sky Sports takes full responsibility for the accuracy of imagery across our platforms. We apologise for publishing the mistake.