"You look at the Lionesses and what they achieved, and that squad was incredible. The ethos of that squad. If we can replicate that...they're a great inspiration for us. It was a great example of how a squad comes together and supports each other to get the job done" - Simon Middleton 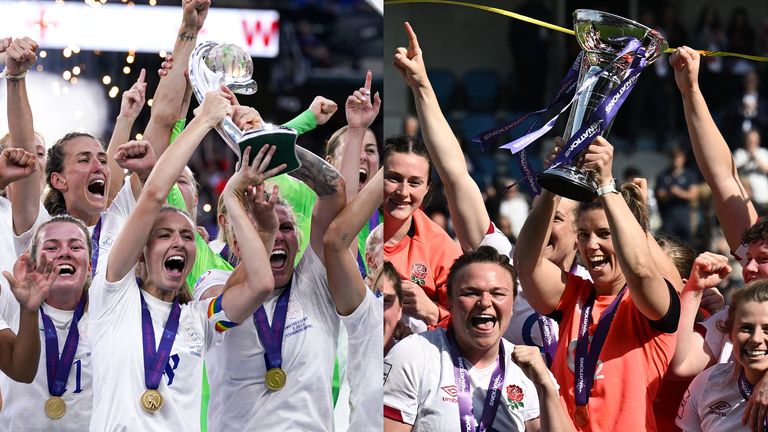 Red Roses head coach Simon Middleton has highlighted the Lionesses for inspiration, as his side kickstart their World Cup campaign in New Zealand on Saturday as enormous favourites.

England, two-time World Cup winners in 1994 and 2014, lost in the final to New Zealand back in 2017, but enter into the tournament this weekend on a world-record run of 25 Test victories.

Off the back of the Lionesses securing a thrilling Euros success over the summer, Middleton has told Sky Sports England's footballers have provided the perfect inspiration for his squad.

"What everybody has to understand, and I'm pretty sure they do, is that the value of every player is exactly the same. Whether you're starting or finishing. This is a squad tournament," Middleton said.

"You look at the Lionesses and what they achieved, and that squad was incredible. The ethos of that squad.

"If we can replicate something like that...they're a great inspiration for us.

"It was a great example of how a squad comes together and supports each other to get the job done. And that's what we're about.

"But we've got opportunity for players to put their hands up, and they'll do that in training. That way we'll keep the camp competitive, and hopefully get the best out of everybody."

With England on such a comprehensive series of victories, and having secured strong wins against countries including France and New Zealand over the past year, the Red Roses have been clear in their target: win the World Cup, and anything else is a failure.

Are the squad feeling the burden of expectancy?

"It's there and there is no point trying to hide away from it [favourites tag and expectancy]," Middleton added.

"As we always say, it doesn't make any difference to us.

"It's flattering, it's really flattering. And we think we've worked really hard to earn it, and we're not going to shy away from it.

"But the players are just focussed on getting in the team.

"They want to get on the park, so they get lost in what tag we've got or what we haven't. They've just got to concentrate on their individual performances and collectively how we come together.

"So that's the thing that keeps everybody real, everybody grounded and focussed on the job in hand.

"We'll be excited and we'll be nervous, and that's what you should be like for a first pool game at a World Cup.

"But we are massively looking forward to it."