Rugby World Cup predictions: Our pundits share their predictions ahead of Japan 2019

Which players are set to impress? Who's going to cause an upset? And who will lift the Webb Ellis Trophy in Yokohama on November 2?

RWC winner and why: England. I genuinely think they will win it - that is not my heart saying that but my head. I think they have a very powerful and physical team. If they can play quickly with that amount of power then they have every chance. Every time they play quick and get their offloading game going then they almost come unstoppable. I also think that they believe that they can genuinely go to Japan and win it.

Player to watch: Faf de Klerk. I think he will be key to their success. South Africa are a bit like England, they have a very powerful team but I still think that they play a little bit too slow. The one guy to get them going quickly is De Klerk.

Dark horse/Most likely to cause an upset?: I think they quarter-finals are pretty predictable but the one team I am really looking forward to seeing is Japan. I think they have a real chance against Ireland and Scotland - I think there could be an upset.

Team you are most looking forward to watching? England; they have the right combinations and they are all fit. For me it is not about the selection anymore, but how they play. From what I saw in the warm-up games really gave me confidence that they understand they need to play a quick game. I am looking forward to seeing Sam Underhill and Tom Curry playing - I would start those two definitely. I always thought that Owen Farrell should play 10, but now I have switched and I think that Ford should play 10 for England. I think that helps England play at a tempo. 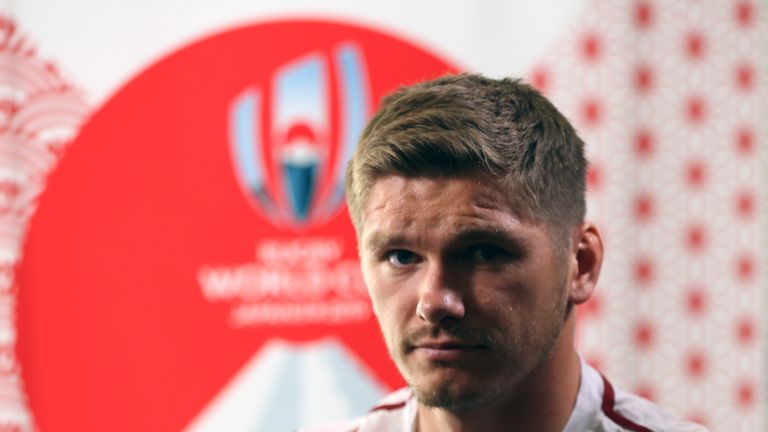 RWC Winner Prediction and why? For all the talk of the closing gap between the hemispheres, if I had to predict a final it would be a repeat of Saturday's main match, New Zealand vs South Africa. In their last three matches there has been little between them. A draw and a win for each side by two points. It could not be tighter.

How will England get on? I expect England to leave their poor efforts in 2011 and 2015 behind and play a starring role in Japan. Performances could be something special from round three to the quarter-final but I fear they will be squeezed out of it by one of the biggest guns.

Player to watch? Alun Wyn Jones making a bid for global rugby immortality; he's already ensconced in the Welsh region of the rugby heavens. Now he is shooting for the summit of rugby Olympus.

Dark horses/Most likely to cause an upset? Japan may have been thumped by South Africa the other Friday and suffered injuries but with home advantage and a draw that has been tailored to keeping them fit and fresh, I reckon they are going to beat Samoa and one of Ireland or Scotland.

Team you are most looking forward to watching? It has to be New Zealand because of the speed and style of their game. Their support play is from another planet. To not enjoy New Zealand with ball in hand is to have a weird idea of how rugby should be played.

RWC Winner Prediction and why? I predict New Zealand will win. They may have not had the best year to date but they are a team you cannot right off. They have the players and the depth to get through the tournament and they know how to peak at the right time as they showed in 2011 and 2015.

How will England get on? I think they are very capable of winning the tournament but I predict they will meet NZ in the semi-finals and NZ will take the win.

Semi-Finalists? My semi-finalists will be; England vs New Zealand and Wales vs South Africa.

Player to watch? Being a former openside flanker, my players to watch are Tom Curry and Sam Underhill.

Dark horses/Most likely to cause an upset? I think Fiji could cause an upset in pool D. They play Australia first and if they get off to a good start they could be hard to stop. They have key players such as Leone Nakarawa and Vereniki Goneva in their ranks who are capable of causing damage.

Team you are most looking forward to watching? I'm looking forward to seeing how South Africa do. Under the leadership of Rassie Erasmus and Siya Kolisi they've had a good year. They've recorded some good results in The Rugby Championships and I think they have timed their World Cup preparation just right.

RWC Winner Prediction and why? England. I think they have incredible power and pace in their squad. They are full of confidence and seem to be peaking at the right time. They have an ability to play a number of different ways and most teams will struggle with their physicality. If they stay injury-free and keep Billy Vunipola, Maro Itoje, Owen Farrell and Manu Tuilagi on the field they will be hard to stop.

How will Ireland get on? Ireland hit a brick wall in the Six Nations and were rocked by England in their warm-up game which will have damaged their confidence and belief given where they were at the end of 2018.

Again, like nearly every team, if they can avoid injuries to key players they can beat anyone on their day. They have to find their mojo again - to be fair they showed some encouraging signs in the last game against Wales. Getting off to a good start against Scotland will be crucial to their confidence and belief. They will make the quarter-finals and play either New Zealand or South Africa which would be a tall order to win.

Dark horses/Most likely to cause an upset: Fiji have the potential to cause a major problem for both Australia and Wales in the pool stages.

Team you are most looking forward to watching? Fiji, they have some incredibly gifted players who can score from anywhere.

RWC Winner Prediction and why? New Zealand - the experience of being able to perform on the biggest stage. Littered with talented individuals who are well-coached. Lastly, they are the All Blacks.

How will Ireland get on? My heart says Ireland will make history and get past the Rugby World Cup quarter-final stage. My head says they will bow out once again at the first hurdle of the knockout stages. Why? Because Ireland will play either South Africa or New Zealand in their quarter-final. South Africa can overpower and physically dominate Ireland, New Zealand have the individual brilliance along with pace and brute ignorance in the contact area. However, Ireland on their day can overturn any opposition and I would love my heart to be right!

Semi-Finalists? We will obviously know a lot more after the first few games on how the knockout stage will unfold. But if I was to pick four teams now it would be New Zealand, South Africa, England, Australia.

Player to watch? James Ryan. I think he is one of the best second-row forwards in world rugby. A MOM against Wales in the friendly game at the Aviva just showed a little of what this man is capable of. Young, athletic, strong, powerful. But most importantly... fearless.

Dark horses/Most likely to cause an upset? I think the days of Tier 2 nations causing an upset are getting further and further away. The Tier 1 teams are all looking strong and I feel they are so well drilled that a slip up against a Tier 2 team will be very unlikely. If I was to throw a curveball for a Tier 2 team to get a scalp... it would be for the home nation Japan to beat Scotland.

Team you are most looking forward to watching? These are the days you wish you were still a pro. When you are jumping on the plane to represent your country on the world stage. It was so exciting as a player to play in a Rugby World Cup, and now as a fan the anticipation is huge.

The @Springboks squad... a few half decent rigs... @rugbyworldcup contenders...? I wouldn’t be betting against them anyways. pic.twitter.com/FIgVzGuGli

Speaking of huge, the team I'm most looking forward to watching is South Africa. I put a picture of the team on my Twitter account and they all look like they have been chiselled out of stone. I feel they are going to bring a physicality to this RWC that hasn't been seen before. And that is exciting... well maybe not for teams playing them during the competition...