The 34-year-old, who led the Red Roses to World Cup victory in 2014, became England's third most capped player of all time in the 25-23 autumn international win against France last month.

The fly-half will continue in her player-coach role at Allianz Premier 15s newcomers Sale Sharks Women for the remainder of the 2020-21 season.

"This has been a difficult but relatively quick decision and feels like the right time," said Daley-Mclean, who was named in World Rugby's women's 15s team of the decade earlier this month. 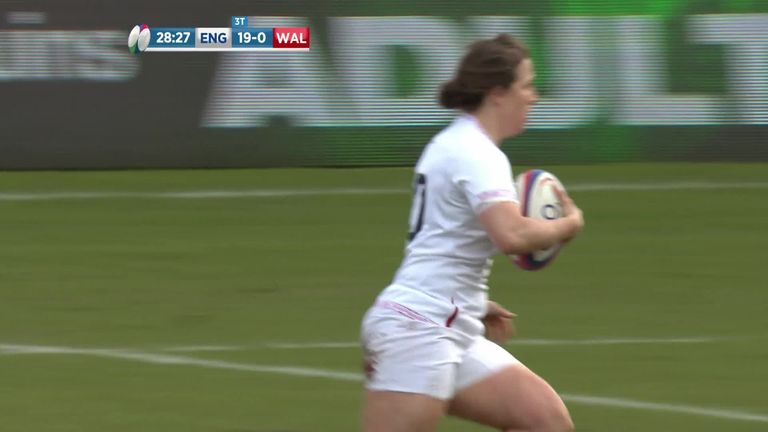 Daley-Mclean scored this fantastic solo try against Wales in March

Daley-Mclean made her Test debut against Scotland in February 2007 and was awarded an MBE in the 2014 New Year's Honours List for services to rugby.

The Test centurion added she would be "the team's number one fan" as Simon Middleton's side prepare for next year's World Cup in New Zealand.

"Becoming a parent 18 months ago was life changing. My daughter also plays a role in my decision," she added. "I don't want to miss out on these precious years with her and the calendar would have meant spending a lot of time away.

"I am so grateful for the experiences the game has brought me. It has been a total privilege to be a Red Rose and I'll be cheering louder than anyone for Simon, Sarah [Hunter] and the girls come October."

England Women head coach Middleton described Daley-Mclean, who scored 542 points throughout her international career, as "an icon of the game".

"The word legend is used a lot but I would tag that to her because of the consistency of her performances over such a long period of time," he said.

"The influence she's had on the women's game worldwide for England has been absolutely sensational."

Rugby has dominated my life since I entered the international set up at 18, making this a very tough decision to call time on my international career. I’ve had an incredible journey, surrounded by exceptional people and couldn’t have wished for anything more... pic.twitter.com/2zdAVRAsS6

Daley-Mclean was also part of the England squad that lost to New Zealand in the final at the last World Cup in 2017.

"I dropped her a message to say working with her has made me a better coach and a better person because she asks so many questions and challenges in so many ways but the right ways," Middleton added.

"It gets you to really think about what you're doing as a coach and how you're delivering your coaching standards. She knows her game inside out.