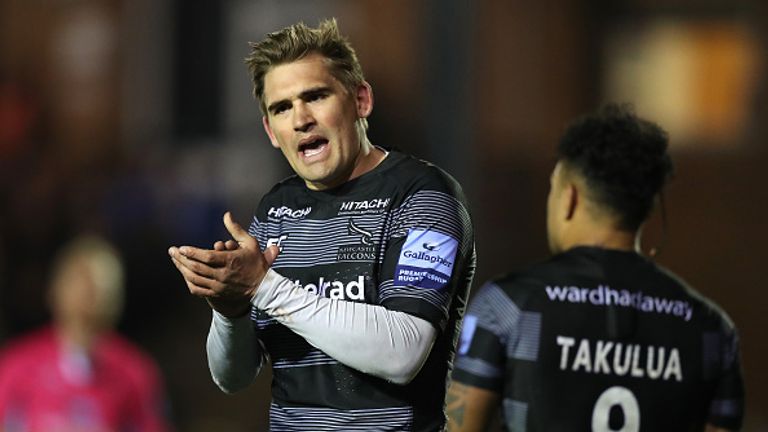 Toby Flood has admitted Newcastle Falcons' automatic promotion back to the Premiership due to the Championship's cancellation feels 'hollow'.

The RFU took the decision on March 20 to cancel all forms of rugby beneath the Premiership, resulting in promotion for the Falcons - who at the time held an 18-point lead at the summit of the Championship, with seven games remaining.

Flood, who won 60 Test caps for England between 2006 and 2014 and has been with Newcastle since 2017, told Sky Sports News on Sunday that though the outcome accomplished the club's goal for the season, the situation was far from ideal.

"It's great to be back in the Premiership," Flood said. "First and foremost, that was our target for the year.

"It's a shame not to have any rugby again, and it's been fairly muted.

"The boys have been pleased with the result but ultimately it feels a bit hollow as there was no real instance where we got to lift the trophy or to actually feel that we were promoted again.

"You can't celebrate it. There's no moment in the changing room either, so it's a bit odd but great to be back up there because it was our big goal of the year."

Before the postponement, suspension and ultimate cancellation of Championship games this season, Newcastle had won 15 from 15 games, 11 with try bonus-points.

They were also due to host the Cornish Pirates in the RFU's Championship Cup semi-final on April 17.

Were they to have completed the season unbeaten, they would have been the first club to do so since the formation of the current Championship. Northampton Saints in the old National Division One were the last club to finish undefeated.

A fact which is a further frustration for Flood and co.

"We were still on to be undefeated, which would have been great to have driven that," he added.

"We had a semi-final and final in the cup and then seven games to go in the league, if we could have managed it [the season unbeaten], we'd have been the first team ever to have done that, or certainly since Northampton.

"That would have been great for us if we could have done that, but it's a shame."