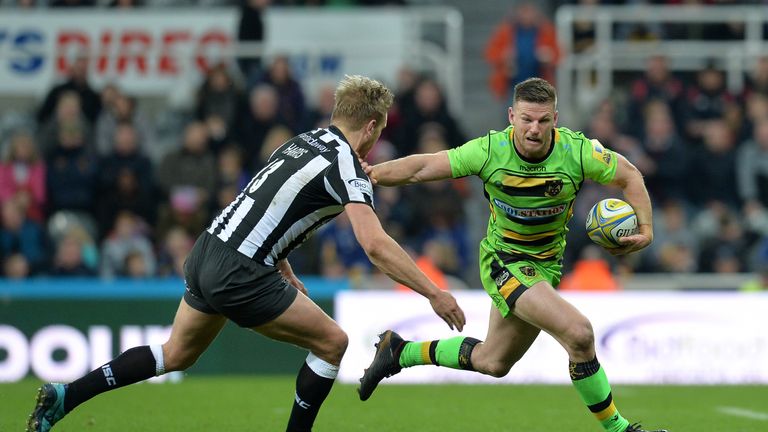 Rob Horne is learning to live with chronic pain caused by the paralysed right arm that forced him to retire from rugby.

Horne is to be honoured in Saturday's Premiership derby between Northampton and Leicester at Twickenham where he will deliver the match ball in front of an expected crowd of 40,000.

The 29-year-old sustained the career-ending injury when making his debut as Saints captain in the same fixture at Welford Road on April 14.

This week's Will Greenwood Podcast features interviews with Rob Horne and Nick Dougherty plus the latest from South Africa.

Once exploratory surgery revealed that all five nerves servicing the arm had been detached from his spinal cord, he underwent a nerve transfer from his ribs into his triceps.

"Essentially it was just for some pain reduction. That's the goal. So we'll see," the former Australia centre said. My life has changed dramatically. To live with paralysis is something that is very new. I'm still learning ways to do things.

"With most nerve injuries there's a constant, chronic pain but saying that, you find ways to deal with it.

"My capacity to deal with the pain has grown hugely since the day of the injury to where I am today. Your brain's a pretty amazing thing.

"I've been amazed with the ways the brain can divert and can function in different ways.

"It's not an uncommon injury. It's a high impact injury - a lot of surgeons find people who come off motorbikes.

"I've met an ex-serviceman who was shot through his brachial plexus, a young lady who was skiing and went off a cliff and did a similar injury.

"It's about living with a paralysis and promoting the fact that you still find ways - it's not a barrier."

Horne is prepared for the "bittersweet" experience of being present at Twickenham having returned to these shores for the occasion following a spell in his native Australia.

"How I'll feel on Saturday is something I've thought about a little bit," he said.

"It's maybe bittersweet in a way. To be recognised in what is one of the great venues in world rugby. Just for my name to be attached to what is such a huge game for the club is special."

Horne made 34 appearances for the Wallabies from 2010-17 and joined Northampton in 2017, quickly becoming a favourite with Saints fans.

"My life has changed dramatically. To live with paralysis is something that is very new. I'm still learning ways to do things," Horne said.

"It's funny how the body is. If one thing is taken away from you, you become pretty innovative and you work out ways to achieve things.

"You surprise yourself all the time about what other ways simple acts can be done."