"To be accepted as a heterosexual male playing in a gay team was just phenomenal."

Twenty years ago, Manchester Village Spartans RUFC was founded as one of the world's first gay and inclusive rugby clubs. Today, there are over 80 such clubs worldwide in the International Gay Rugby (IGR) family.

Established with a small grant from the NHS to help gay men lead more physically active lives, the Spartans have grown way beyond original expectations. They now field a first team in the local Halbro Northwest Intermediate League; have a second team in the IGR UK League Championships Northern Division; and train a development squad of inexperienced players and those brand new to the sport. 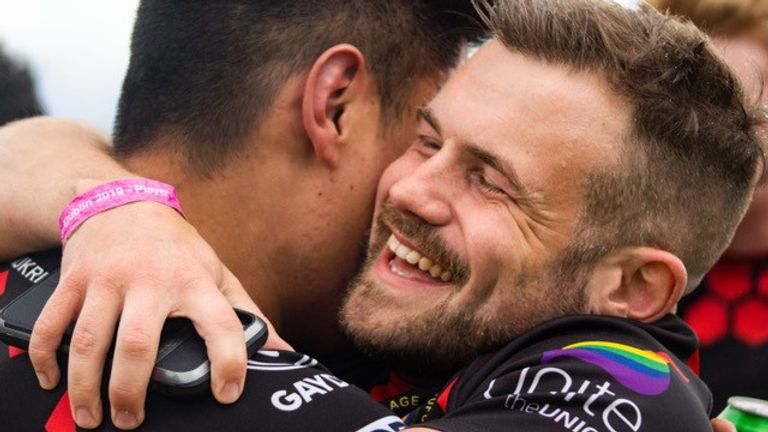 Having straight allies tells us we're a competitive rugby club, and that they feel welcome as well - that's really important.

Their whole-hearted inclusive approach to rugby is the focus of the third in the new series of 'Spotlight' short films produced by the charity Sport Allies working in conjunction with students and graduates from the London Film School, and supported by Sky Sports. The three films have all been released to mark National Inclusion Week.

While many of the Spartans players and coaches were growing up, the relationship between rugby and masculinity was made more complicated for them by the language commonly used around sport.

"I went to a very rugby-focused school, it was a brilliant school, but if you did something crap on the rugby pitch, the line was 'DBG - don't be gay'. It has a subtle effect on everybody."

Now however, inclusion is intrinsic to Spartans life - and there is nothing subtle about their commitment to that. The film follows them to this summer's Union Cup in Dublin, where their 1st XV reached the final and their 2nds claimed the Challenger Cup trophy; a strong tournament showing to mark the club's 20th anniversary.

The players featured include Neil Gallagher, who talks about why he joined an inclusive club as a straight man, and Archie Taylor, for whom the Spartans are his family - a home away from home.

Club chairman and 2nd-team coach Gareth Longley, another interviewee in the film, said: "We're so proud to be Spartans, and incredibly pleased that our most successful IGR tournament has been captured on film so beautifully by Sport Allies and London Film School."

Watch Gareth, Neil, Archie and others discuss why they're proud to be Spartans and the camaraderie of gay and inclusive rugby - and see how they celebrated their success at the Union Cup.