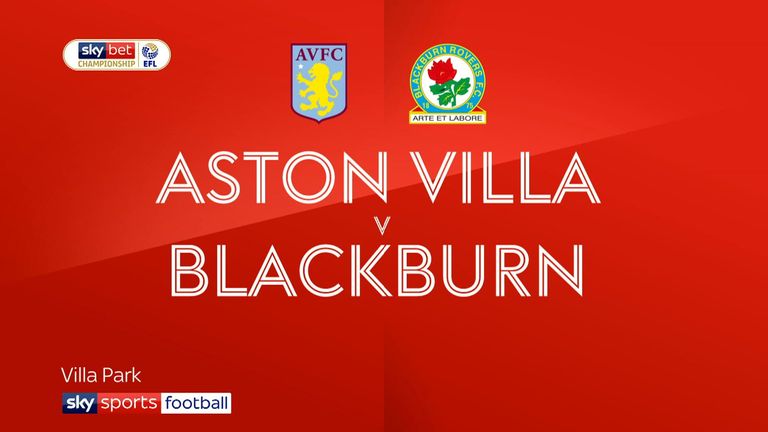 Aston Villa striker Tammy Abraham scored his 22nd goal of the season in front of watching England manager Gareth Southgate to help secure a 2-1 win against Blackburn at Villa Park.

On-loan Chelsea marksman Abraham gave Villa the lead after only eight minutes as Dean Smith's side strengthened their bid to secure a place in the play-offs with a fifth successive win.

Amari'i Bell gave Blackburn a lifeline in the 74th minute and Villa then had to ride out a nervy finale.

As well as Abraham, Southgate could also have been watching Villa talisman Jack Grealish. Villa's five victories have all come since his return to the side following three months on the sidelines with a shin injury.

While Villa are enjoying a red-hot sequence of results, Blackburn remain in free-fall.

Their latest loss extended their recent run to eight defeats in 10 games - collecting only four points from 30.

Villa made the perfect start when John McGinn lifted a cross into the path of Anwar El Ghazi.

El Ghazi rolled the ball across the face of the Blackburn goal and Abraham had the simple task of turning home his shot from four yards.

Abraham would have doubled Villa's advantage six minutes later but for goalkeeper David Raya, who blocked his low drive with his legs.

After their torrid start, Blackburn finally enjoyed some pressure of their own when they forced two corners.

Darragh Lenihan had a 15th-minute header cleared off the line before Craig Conway hit the bar from 20 yards as Villa rode their luck.

It was only a brief respite for Blackburn and Raya was again in the thick of the action after 21 minutes when he turned a shot from McGinn on to the post before saving another long-range effort from the Scotsman and a drive from Grealish.

Villa were then denied a second goal on the stroke of half-time by the linesman's flag when El Ghazi pushed the ball over the line after Raya had parried a shot from Neil Taylor.

But Villa did finally double their advantage when Blackburn failed to fully clear a McGinn free-kick.

The ball found its way back to McGinn and when he floated over a cross, Mings steered his header inside the near post.

Blackburn then gave themselves hope of an improbable comeback after McGinn fouled Conway 25 yards from goal.

Charlie Mulgrew's free-kick was only parried by Villa goalkeeper Jed Steer and Bell had the simple task of volleying a shot into the roof of the net from five yards.

Dean Smith: "We knew how important this game was, and you could feel that in the atmosphere at Villa Park.

"To go five wins in this league is a tremendous achievement for the players but we need to keep winning because we know there are a lot of teams grouped in amongst us. We have got ourselves into a good position and we need to maintain the form and performance levels to stay there."

Tony Mowbray: "It was a game of two halves, with Villa's class there to see in the first as we couldn't really get near them and had to work really hard to keep the score where it was.

"But by the end they were hanging on by their fingernails. I thought we grew into the game, playing with a bit more confidence, and we feel a bit disappointed we didn't get something from it in the end."