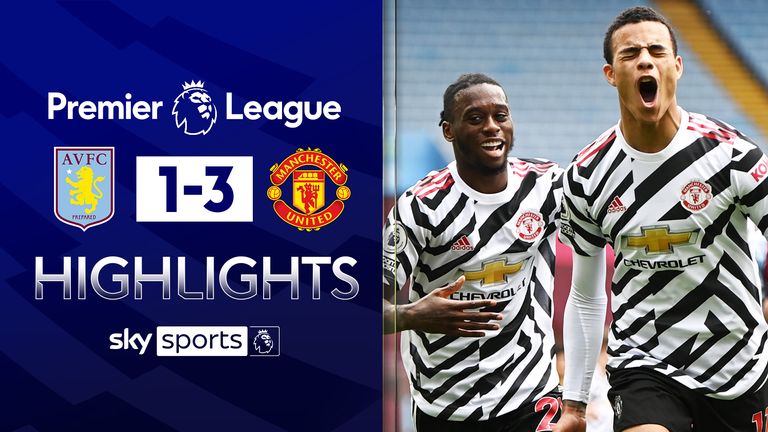 Manchester United once again fought back from a goal down to beat Aston Villa 3-1 at Villa Park, meaning Manchester City must wait to be crowned Premier League champions.

City still need three points themselves, or for United to drop three points, as Ole Gunnar Solskjaer's team made it 31 points from losing positions, the most of any Premier League side.

Villa took the lead midway through the first half as Bertrand Traore turned and produced a fine effort into the top corner (24), though questions will be asked of Victor Lindelof's defending.

When can City win the league?

If United lose to either Leicester (Tues) or Liverpool (Thurs), or drop points in both games, City will be crowned champions. And even if United go on winning, City can still win the title by taking matters into their own hands by beating Newcastle on Friday night.

But United, playing the first of three games in five days, fought back in the second half through Bruno Fernandes' penalty after Douglas Luiz had clumsily fouled Paul Pogba (52), before Mason Greenwood found the bottom right corner with a fine turn and finish (56).

But for the first time in his 72 league appearances for United, Harry Maguire did not complete 90 minutes, forced off with an ankle injury in what will be a concern for Solskjaer's side ahead of a packed schedule, and for England ahead of Euro 2020. Solskjaer said after the game the defender's injury will be assessed, and "might be a few weeks, might be a few days."

Substitute Edinson Cavani wrapped up the points with a classy header (87) while Ollie Watkins saw red for two yellows, the second for simulation.

The result means United are now unbeaten in 25 away games, two shy of Arsenal's record from 2003 to 2004, while Villa are 11th, six points off the top seven but with a game in hand.

How United fought back again at home from home

Much has been made of United's schedule, but Solskjaer fielded a strong side at Villa Park, where they have not lost in the Premier League since 1995.

Luke Shaw had the freedom of the left flank early on as Villa struggled to keep tabs on the United wing-back, who stung the hands of Emi Martinez with an effort from an angle.

Just moments after Greenwood's miscued shot almost fell into the path of Marcus Rashford, waiting at the back post to convert, Villa took the lead with their first opening.

John McGinn broke up play superbly high up the pitch, allowing Luiz to feed Traore, who turned Lindelof in the box and fired a superb left-footed effort into the top right corner from a difficult angle. Lindelof, however, should have initially cleared the ball as Traore's turn fell into his path.

Greenwood saw his own effort from a tight angle parried by Martinez, while Watkins forced a good stop from Dean Henderson in first-half stoppage time, but United, who have scored more goals than any other Premier League side in the second half, stepped it up after the break.

They were handed the leveller on a plate as Luiz kicked through Pogba in an attempt to get the ball, unnecessary with his back to goal, but described as a "pathetic" decision by Villa boss Dean Smith. Chris Kavanagh gave it, prompting Fernandes to calmly convert the penalty, his 27th goal in all competitions this season and the record-breaking 113th penalty taken in the Premier League this term.

Four minutes later United went ahead as Aaron Wan-Bissaka found Greenwood with his back to goal. With Tyrone Mings on his back, the youngster turned well, and found the bottom corner past Martinez from just inside the box, making the 19-year-old the top-scoring teenager for United in the Premier League, ahead of Wayne Rooney (16 to 15).

Henderson then did well to deny Traore's near-post effort, while Villa had an appeal for a handball on Greenwood turned down following a VAR check, before Maguire was brought off with an ankle injury following a collision with Anwar El Ghazi.

United made sure of the win through substitute Cavani with three minutes remaining, running across the Villa defence to guide Rashford's drilled delivery into the far corner with class.

Villa's afternoon was made worse as striker Watkins saw red for a second yellow, going down in the area after slipping past Henderson, with referee Kavanagh deeming it a dive.

Hosts Villa were without Jack Grealish again, and were unchanged from their 2-1 win at Everton last weekend.

Ole Gunnar Solskjaer hinted at changes, but this was a strong United side. They made one change from their last Premier League fixture a fortnight ago, bringing in Paul Pogba for Daniel James. Edinson Cavani was on the bench.

It was another afternoon of positives for United, showing character to fight back once more, but there will be lingering concerns over another stuttering first half - they have gone 1-0 down more times (14) than they have gone 1-0 ahead (13) this season - and the severity of Maguire's injury.

For Villa, it was a familiar story; this was the ninth time they have led United in all competitions at Villa Park without beating them. 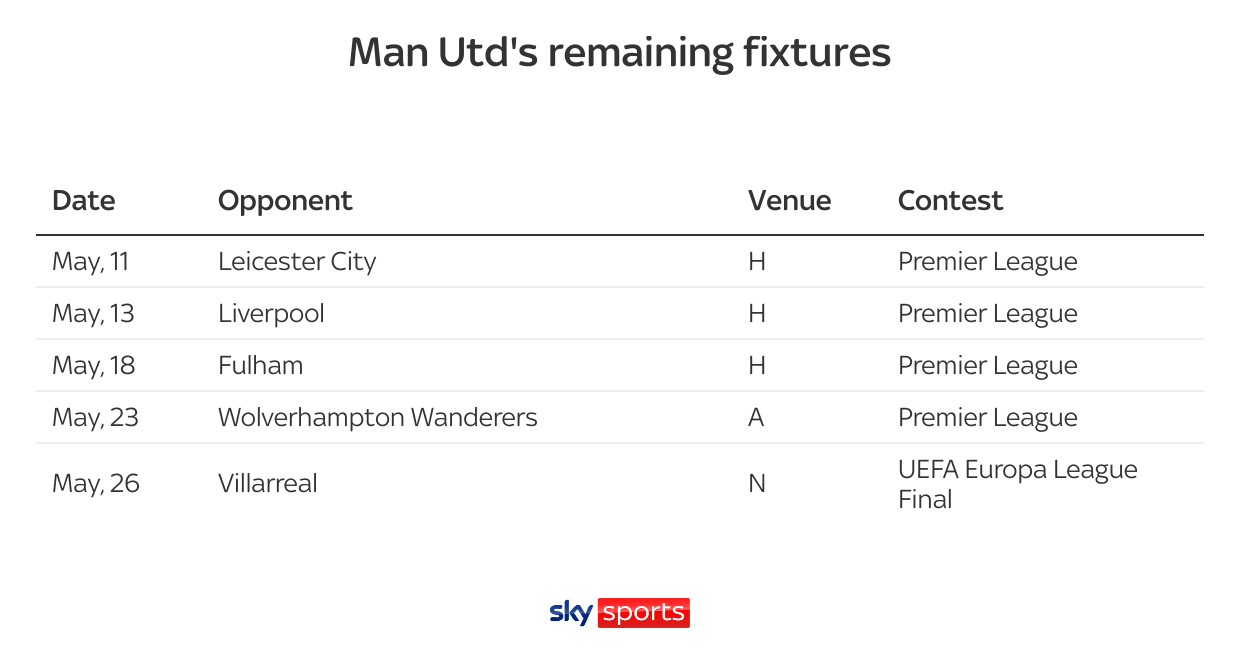 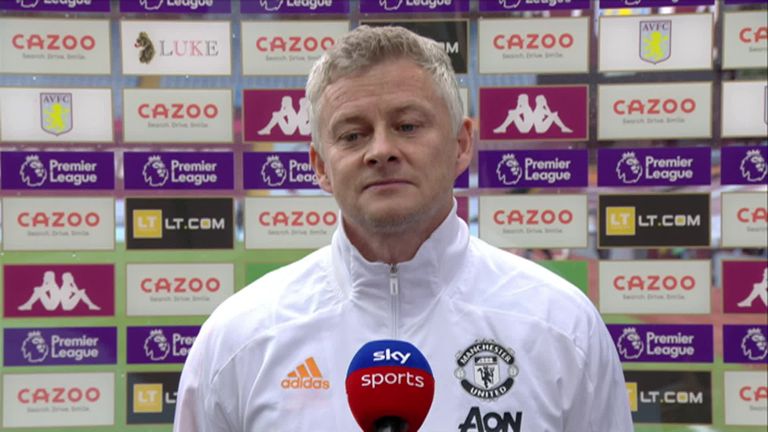 On Maguire injury: "I don't know. We've got to check it. Might be a few weeks, might be a few days. Was his ankle, lower leg."

On delaying City title: "That's a good thing, that's the best thing with today. At least I don't drive into a blue army tonight, we'll try to deal it as long as we can.

"I'm delighted. It was always going to be difficult after being in Europe, didn't come back until half four in the morning on Friday. Great reaction at half-time again, even though I felt first half we were the better team, created the better chances but couldn't find the goal.

"The advantage of being fresh going into a game like this is quite high. We could have scored the first goal, they scored from nothing, with a good goal by the way, but I'm pleased with everyone. I know how hard it is towards the end of a long, long season." 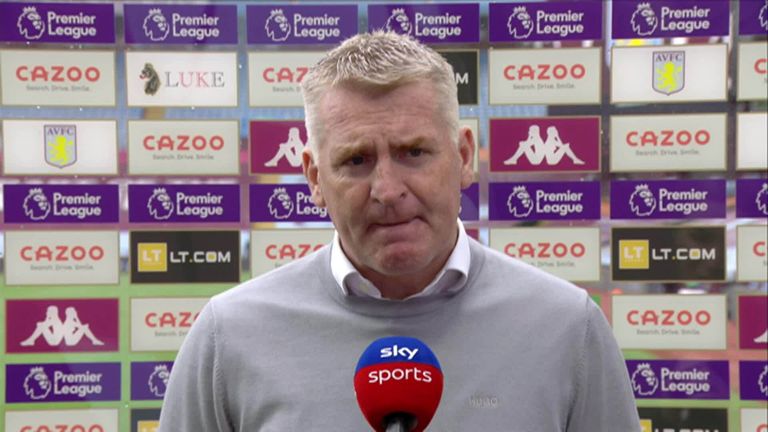 "I think the penalty decision affected us more than them, they got the opportunity to go and score and got their second after.

"I have no idea [if it is the right decision], I don't think anybody knows at the moment, everybody is confused that Raheem Sterling can have four or five touches on his backside, go down, and not get a penalty, when we've got people at Stockley Park watching it again. And then there's one touch, they [Pogba] go down, and it is a penalty. I think the whole of the footballing world is confused at the moment.

"It looked a pathetic decision to me: was that enough for him to go down? No. But he goes down. Similar to at Old Trafford, similar to last season here. Ollie Watkins has got sent off at the end for a second yellow - there's no way that he can tell me he's convinced he hasn't been touched, because nobody knows if he's been touched, apart from the two players. I just don't understand the decision-making of the officials at the moment, and more important, Stockley Park, when they are looking at it slowly.

"It looks like now he's going to have to get hurt to win the penalty. He touches it past the goalkeeper: is it enough for Ollie to go down? No, but it isn't enough for Pogba to go down."

Man Utd's hectic schedule continues with a home fixture against Leicester on Tuesday at 6pm, before hosting Liverpool in their rearranged fixture on Thursday at 8.15pm, live on Sky Sports Premier League.

Aston Villa host Everton on Thursday night at 6pm, before going to Crystal Palace at midday on Sunday, both live on Sky Sports Premier League.