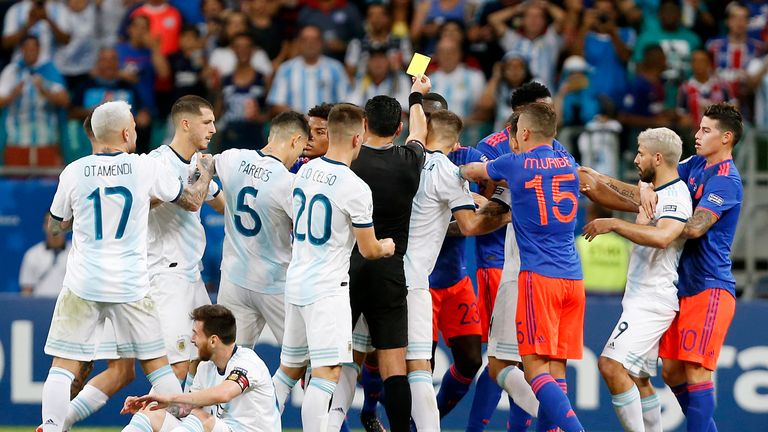 Argentina suffered their first defeat to Colombia since 2007 in their Copa America opener while Peru drew with 10-man Venezuela.

Lionel Messi endured more frustration with Argentina as they began their Copa America campaign with a 2-0 defeat to Colombia.

Roger Martinez's outstanding strike (71) and Duvan Zapata's late second (86) got Colombia off to the perfect start in the tournament with their first victory over Argentina in 12 years.

In a tense game in Salvador, tempers boiled over when Juan Cuadrado was booked for late a challenge on Messi in the second half, sparking a mass brawl between both sets of players.

After finishing as a runners-up in the last two tournaments, the defeat was less than ideal for Messi's bid to guide Argentina to a first international trophy under his stewardship.

Argentina went close to taking the lead through Manchester City defender Nicolas Otamendi - but his header was saved by Arsenal 'keeper David Ospina before Messi missed on the follow-up.

Colombia had looked stronger in the first half, but Argentina were a different beast when Rodrigo de Paul replaced Angel di Maria immediately after the interval and captain Messi was able to find space to cause some problems.

Messi wasted the best chance of the game when he skewed a rebound wide from close range before Colombia went in front in style, Martinez cutting in off the left flank before smashing an unstoppable drive into the far corner.

Argentina were floored by the strike and things took a turn for the worse four minutes from time when Zapata converted from close range to secure a famous victory for Colombia.

Peru were held to a 0-0 draw by 10-man Venezeula in their opening Copa America game packed full of drama in Porto Alegre.

Christofer Gonzales' thought he had given Peru the lead with a volleyed rebound from 12 yards, but it was ruled out for offside after VAR was consulted.

Jefferson Farfan then headed the ball into the back of the Venezuela net for the second time in the second half, but Peru were denied again, this time by the linesman's flag.

Venezuela finished the game with 10 men after Luis Mago was sent off for two bookable offences but held on for a point that leave both teams joint-second in Group A, two points behind hosts Brazil, who opened with a 3-0 win over Bolivia on Friday in Sao Paulo.