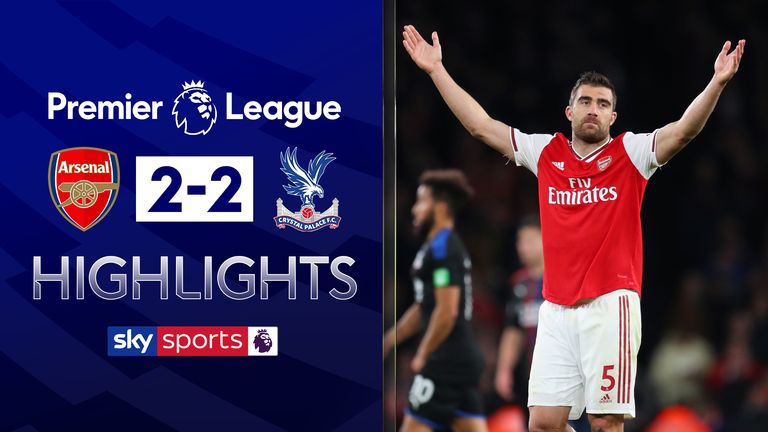 VAR took centre stage in a pulsating encounter at Emirates Stadium as Crystal Palace fought back from two goals down to secure a battling 2-2 draw with Arsenal.

In a game which saw Granit Xhaka clash with his own fans following his second-half substitution, Roy Hodgson's side benefitted from two VAR calls after Arsenal had raced into a two-goal advantage following goals from Sokratis Papastathopoulos (7) and David Luiz (9).

The first came when the visitors were correctly awarded a penalty after Calum Chambers felled Wilfried Zaha in the penalty area.

Zaha, who was heavily linked with a move to the Gunners in the summer, was initially booked for diving until the Video Assistant Referee intervened to award the spot-kick and Luka Milivojevic made no mistake.

Palace drew level at the start of the second half, Jordan Ayew heading in James McArthur's cross minutes before Xhaka's clash with the Arsenal fans.

The Switzerland international's substitution was met with ironic cheers before the Gunners faithful jeered him off for what they perceived as a lack of urgency leaving the field. He then cupped his ears to the fans before removing his shirt and heading straight down the tunnel.

The Gunners then thought they had won the game when Sokratis struck in the 83rd minute but they were denied by VAR, who adjudged Chambers to have fouled Milivojevic in the build-up.

"VAR is positive but at the moment it is not working well," said Arsenal boss Unai Emery.

It ended all square, much to the frustration of the home fans, who saw their side lose ground in the race for the top four. The final whistle sparked jubilant celebrations from Palace and their supporters as they continued their fine start to the season.

How the pulsating encounter unfolded

Arsenal set out their stall to attack with Pierre-Emerick Aubameyang and Alexandre Lacazette starting in a front two with Nicolas Pepe and Dani Ceballos in support.

However, it was the defenders who did the damage in the early stages as Sokratis and Luiz both scored from corners inside the first 10 minutes. Sokratis opened the scoring in the seventh minute, sweeping home from close range following Xhaka's header.

Two minutes later, Luiz was on hand to finish at the far post after Lacazette had flicked on Pepe's corner.

Despite their early dominance, Arsenal let Palace back into the match as VAR overturned referee Martin Atkinson's decision to book Zaha for diving. The Video Assistant Referee instead awarded Hodgson's side a penalty for a foul by Chambers.

Up stepped Palace captain Milivojevic to send Bernd Leno the wrong way and halve the deficit before half-time.

Palace were the quicker of the two sides out of the blocks after the break and they were level when Ayew headed home McArthur's cross at the back post.

With Arsenal supporters growing increasingly frustrated after seeing their side pegged back, the flashpoint of the game came when Emery opted to substitute his captain for the second Premier League game in a row.

Xhaka began ambling off the pitch and, with the home fans unhappy he was not rushing off to be replaced by Bukayo Saka, he reacted furiously, cupping his hand to his ear before taking off his shirt and heading straight down the tunnel.

On the field, the change seemed to turn the tide in Arsenal's favour, Lacazette forcing a save from Wayne Hennessey at his near post as they pushed for the lead.

They thought they had finally snatched a dramatic win when Sokratis found the back of the net after a Pepe corner had not been cleared but, after a lengthy VAR check, the goal was ruled out for an alleged foul by Chambers in the build-up

There was still time for one final Arsenal chance, but Hennessey made a good late save to keep out Luiz's shot. Zaha then went close at the other end as Palace went in search of victory, but in the end both sides had to settle for a point.

Arsenal head coach Unai Emery: "We can speak about our performance and the VAR decision. We started very well and then conceded many chances so we should have controlled possession better to get more chances at 2-0, but usually the opposite team want to push more and then they scored. We need to respect the decision, which was amazing. Last match here against Bournemouth, they didn't check for a clear penalty on Pepe and at Sheffield (United) on Sokratis. 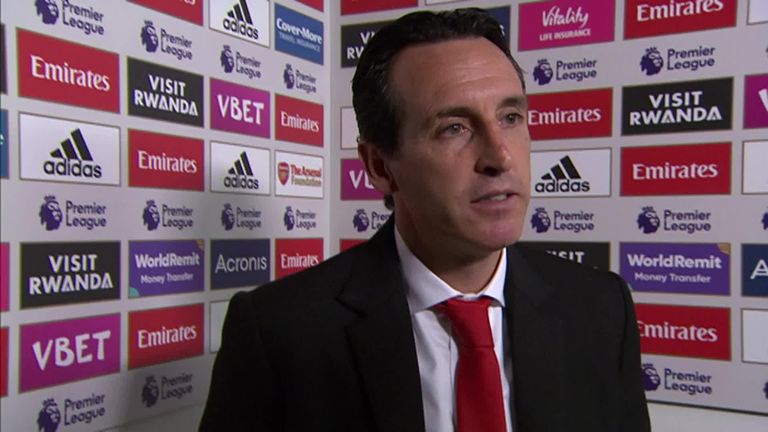 "VAR is positive but at the moment it is not working well. I think VAR is very important for the referees because their mistakes are very important. We haven't checked a lot of things to not change the pace of the match. Pepe and Sokratis' penalties were very clear but they didn't check. Maybe they are starting to check more after this week.

"The next step is a monitor on the touchline to check because VAR is to help referees."

Crystal Palace boss Roy Hodgson: "I thought we showed resilience here and against Manchester City. Today the desire we showed was exceptional. The way Arsenal start is the way football disasters are made, but we settled down and mounted a challenge in the second half." 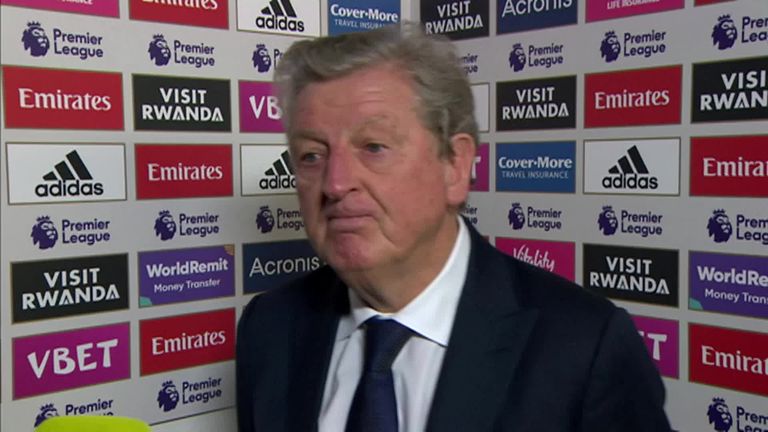 On the penalty awarded to Palace, he added: "They make decisions on the spur of the moment and that was a situation where VAR showed its true self. Luckily, the decision was overturned and I'm sure Martin [Atkinson] is man enough to accept that.

And finally, on Arsenal's disallowed goal, he said: "A lot goes on in the penalty box, I've seen it now and understand why it was disallowed. But the second goal had a clear push on James McArthur too."

Kieran Tierney was handed his Premier League debut for Arsenal as Unai Emery named Nicolas Pepe, Pierre-Emerick Aubameyang and Alexandre Lacazette in attack against Crystal Palace. The Gunners made nine changes from their 3-2 Europa League victory over Vitoria with Pepe rewarded with a start, having come off the bench to score twice. Tierney signed from Celtic in the summer but was recovering from a groin injury and, having worked his way back to fitness, he was deemed ready to make his Premier League bow. Lacazette was also back from an ankle problem and looked rusty against Vitoria but retained his place against the Eagles.

Wilfried Zaha started for the visitors, having been heavily linked with a summer move to Emirates Stadium.

Andros Townsend came into the side as Roy Hodgson made only one alteration from the 2-0 defeat to Manchester City, with Jeffrey Schlupp dropped to the bench.

Man of the Match - Jordan Ayew

Ayew's recent good form continued at the Emirates Stadium. He battled hard for his team and his pace and work rate caused Arsenal plenty of problems right up until he was substituted nine minutes from time.

He was also in the right place at the right time to head home McArthur's cross early in the second half for Palace's equaliser. It was his fourth goal in eight Premier League games and as many as he's managed in his previous 34.

Palace will be hoping it continues for a good while longer.

Arsenal now travel to Liverpool in the Carabao Cup at 7.30pm on Wednesday evening, live on Sky Sports Football from 7pm. They then face Wolves at Emirates Stadium on Saturday in the Premier League (3pm).

Crystal Palace's next assignment is against Leicester City at Selhurst Park in the Premier League next Sunday, live on Sky Sports Premier League from 2pm (kick-off 3pm).