By Gerard Brand at The Emirates 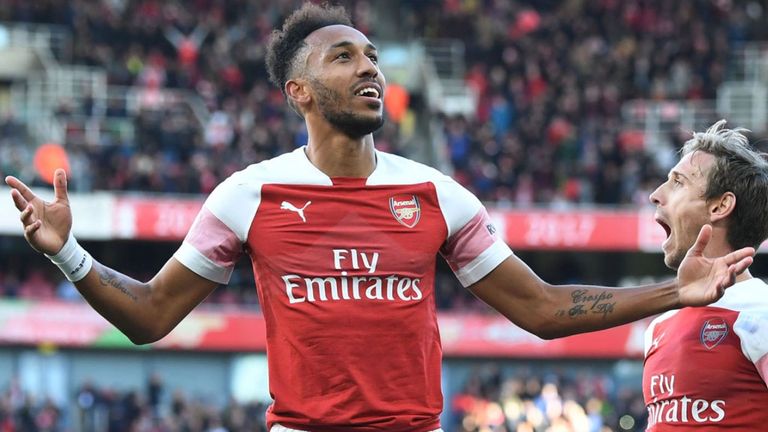 Alexandre Lacazette's fine second-half strike helped Arsenal to a 2-0 win over Everton in the Premier League at The Emirates on Super Sunday.

The impressive Petr Cech kept Arsenal level in the first half with several fine stops, before a curling stunner from Lacazette (56) and Pierre-Emerick Aubameyang's close-range finish (59) gave the hosts a cushion, despite the latter looking offside.

The result means Arsenal have won their last five on the bounce having lost their opening two, and sit in sixth place with Everton back in 12th.

Man of the match: Petr Cech

Though Arsenal had most of the ball, the majority of chances fell Everton's way in the first half; Richarlison was denied at his feet by Cech in the second minute, before he again forced the goalkeeper into a save with a 20-yard snap shot.

Nacho Monreal saw his effort from close range superbly saved by Jordan Pickford after Aubameyang had unselfishly fed him, while Theo Walcott's pace caused problems for his old club, racing in-behind to see a shot blocked well by Cech again.

Arsenal struggled to deal with Richarlison again before the break, Cech coming to the rescue once more to tip over his fierce shot from the left angle of the box, but the hosts struck twice in quick succession after half-time.

Torreira started his first Premier League game for Arsenal as Unai Emery made seven changes from the side that beat Vorskla 4-2 in the Europa League. Cech returned in goal, while Bellerin, Mustafi, Xhaka, Ramsey, Ozil and Lacazette all returned.

Walcott started against his old side, while Richarlison came back from suspension and Keane partnered Zouma in defence.

Everton started the second half well, but were flattened by two goals in four minutes. Out of nothing, Aaron Ramsey slid in Lacazette to curl home off the post from the edge of the box for his second goal of the season.

Arsenal were then three-on-one in the final third, with Mesut Ozil's intended pass for Ramsey finding Aubameyang, who finished past a helpless Pickford despite being in an offside position.

Everton hit the bar late on through Lucas Digne from a tight angle, but Cech was unbeatable in the Arsenal goal as Everton were beaten for a second straight Super Sunday.

Unai Emery: "I'm very happy with the goalkeeper, and how they are all working for us, Emiliano [Martinez], [Bernd] Leno and Cech. I think Cech has a big experience, big quality, he started the pre-season very well, and we think he is in a performance we want. 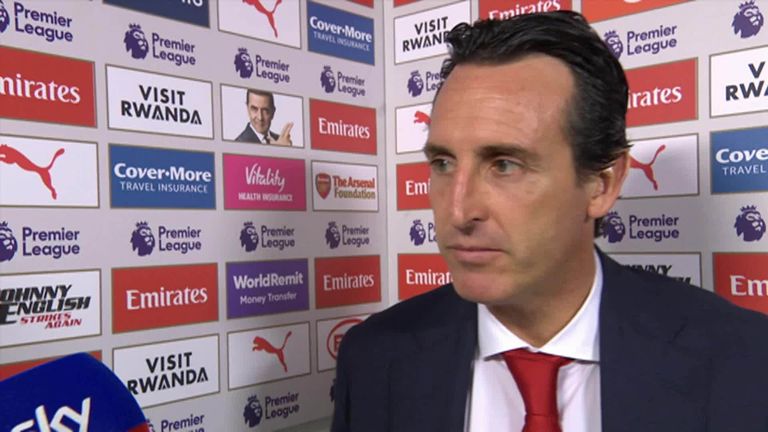 "Today he showed us he is very well and is continuing with this work and this spirit every day. The other goalkeepers are the same, very well, and need to continue working for when the team needs."

Marco Silva: "It was offside. At this level, with these mistakes from the referee, it put our team in that condition as well. The second goal is clearly offside. It is really frustrating, and I tell you why. In that moment we had just one player in our box, it is too clear for the assistants." 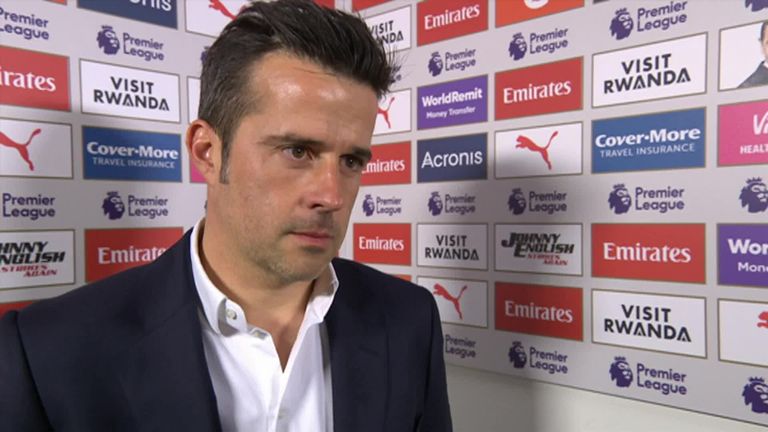 Marco Silva felt Everton should have got something from the game

Arsenal's appeal for a penalty just after half-time fell on deaf ears as the ball hit Jonjoe Kenny on the arm, but VAR would have most likely played on, with the Everton man just a yard away from Aubameyang's initial header.

However, Aubameyang's goal would have certainly been ruled out, with the Gabon striker clearly offside before netting.

Man of the match - Petr Cech

He's come in for criticism in recent months, but this was vintage Cech. None of Cech's six saves were run-of-the-mill, and if it weren't for his stops from Richarlison and Walcott in the first half, this would have been a different story.

Aerially he was dominant, and even on the ball he showed composure, going long when necessary and getting a huge cheer for a delightful dink into Hector Bellerin under pressure.

Arsenal now face Brentford in the Carabao Cup third round on Wednesday night, before welcoming Watford to The Emirates on Saturday at 3pm in the Premier League. Everton face Fulham on Saturday at Goodison Park.