Report and highlights from the Sky Bet Championship clash between Barnsley and Birmingham at Oakwell as Daryl Dike scored the only goal of the game to seal a seventh win in a row for the Tykes, their best-ever run at this level 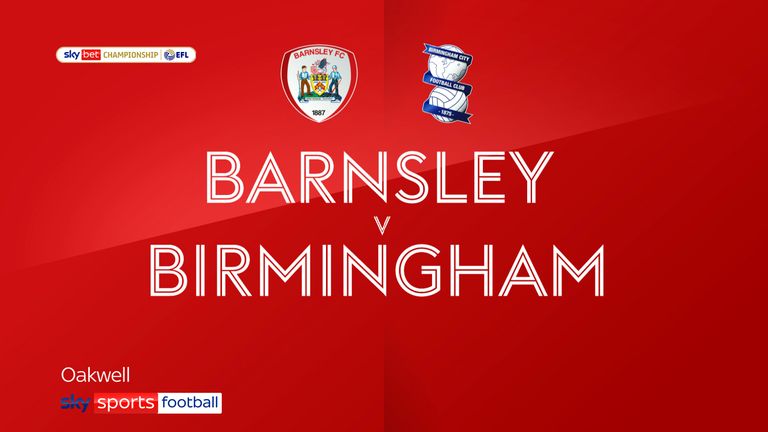 Highlights of the Sky Bet Championship game between Barnsley and Birmingham

Barnsley made it seven straight Sky Bet Championships wins with a 1-0 victory over Birmingham at Oakwell.

A second-half Daryl Dike rocket saw the Reds climb into the top six while the Blues continue to teeter precariously above the drop zone.

Barnsley manager Valerien Ismael made two changes from the side which beat QPR on Tuesday night. Dominik Frieser replaced Conor Chaplin and Michael Sollbauer was preferred to Toby Sibbick.

Blues' Harlee Dean had the first chance of the game. Meeting a Gardner free-kick, the captain could only steer his header wide in the opening exchanges.

Cauley Woodrow followed with the Tykes' first effort of the afternoon. Firing low past the post, the forward failed to find the target with a quarter of an hour gone.

The visitors were next to try their hand at an opener. Heading over the crossbar midway through the first half, Dean could not convert from Gardner's cross.

A Woodrow attempt ensued as the Reds striker volleyed into the empty stands shortly after the half-hour mark.

Woodrow concluded the opening half with a tame shot from the edge of the area as Neil Etheridge made a comfortable stop.

Ismael made a double substitution at the interval. Jordan Williams and Carlton Morris replaced Callum Styles and Frieser.

Dike flew out of the blocks at Oakwell. The forward forced Etheridge into a straightforward save as he connected with Woodrow in the final third.

Dike then broke the deadlock in the 49th minute. Latching onto Morris' pass down the right, the American fired a thunderbolt past Etheridge at his near post from 22 yards.

Mowatt almost sealed the points for Barnsley but the midfielder's left-footed shot could not beat Etheridge from 35 yards out.

Barnsley's Valerien Ismael: "In my 28 or 29 years in football, I have never seen a strike like that before. It was something unbelievable. Congratulations to Dike and the guys for a great win today. It was all about defending long balls and second balls. You have to stay strong and you have to deal with the way they play.

"In the second half we made changes and put pressure on the opponent. We've kept a clean sheet and we are in a brilliant position at the moment. The transfer window was important for us and now we are getting the reward. This is what you can achieve when you believe. Everyone has the same vision, and everyone is hungry. We will have a clear picture of the table just before the international break."

"When you lose a game, something hasn't worked and as a coach I am responsible for the result. I tried to play with a strong team. They are really good at set-pieces and I thought that we could have kept more of the ball. We are in this position because of the mistakes that we are making. We can't blame anybody but ourselves."