Report and highlights from the Sky Bet Championship clash between Barnsley and Bournemouth at Oakwell as Jason Tindall's men returned to the top of the table with a crushing 4-0 win thanks to goals from Philip Billing, Dominic Solanke, Diego Rico and Sam Surridge 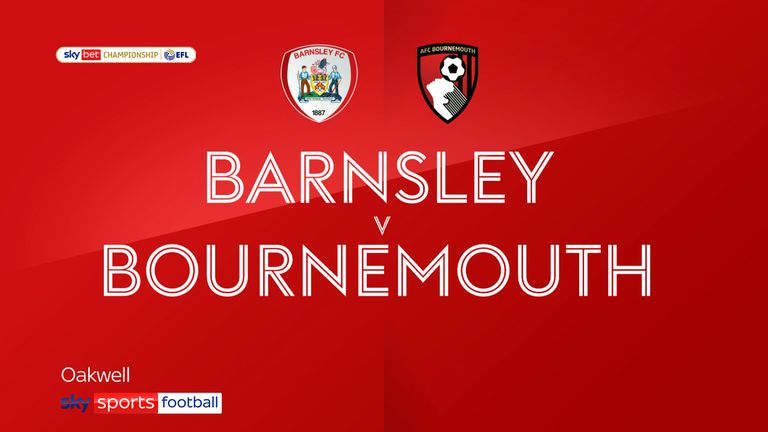 Highlights of the Sky Bet Championship match between Barnsley and Bournemouth.

Bournemouth dealt Barnsley a lesson in efficiency as they dealt the Tykes their biggest home defeat in seven years with a 4-0 win at Oakwell.

While proceedings weren't as one-sided as the scoreline suggested, the hosts failed to take numerous chances to level the game after Philip Billing's opener (12) and were punished accordingly when Dominic Solanke added a second (45+2).

A stunning free-kick from Diego Rico - the Spaniard's first since joining from Leganes in 2018 - extended Bournemouth's advantage after the break (52), before Sam Surridge raced forward to add the gloss with a tidy finish soon after (68).

Jason Tindall's men climb to the top of the Sky Bet Championship as a result of the comprehensive victory, with Barnsley dropping to 15th, below Preston, who now boast a slightly better goal difference.

With Barnsley in the midst of a determined march up the table and Bournemouth keen to avenge a midweek defeat to Preston, there was little surprise when proceedings at Oakwell started with a flurry of chances for both sides.

A breakdown in communication for the hosts saw Surridge roll a shot across the face of an empty goal, and Solanke saw a shot blocked moments before Tykes captain - and long-range specialist - Alex Mowatt tested Asmir Begovic's reflexes with a powerful curling effort from 20 yards out.

Bournemouth nudged ahead when Billing arrowed a shot far out of Jack Walton's reach and into the bottom right corner, but from then their intensity waned slightly, with Barnsley looked more likely to level, as several tantalising crosses from Conor Chaplin drifting to the far post unchallenged.

Right on the stroke of half-time, the Cherries doubled their lead. Cauley Woodrow was caught in possession a few yards from the edge of his own area, allowing Solanke to take custody of the ball race towards the byline and fire across Walton.

Just seven minutes after the break Rico caught Barnsley off guard when he expertly found the inside of the near post with a sublime free-kick from 20 yards and while Woodrow and substitute Luke Thomas went close, the result was put beyond doubt when Surridge charged forward on the counter and scored his second goal in a week, with the help of a touch from Tykes goalkeeper Walton.

Man of the match - Sam Surridge

The 22-year-old had been restricted to just two league starts prior to this week, but after scoring in the midweek defeat to Preston and then again at Oakwell, he has given Jason Tindall real food for thought ahead of the busy December schedule that lies ahead.

He threatened in attack from the first minute and went close with the aforementioned effort, while also drawing several fouls to smartly win free-kicks for the Cherries. An impressive performance was rounded off with a deserved goal midway through the second half.

Barnsley's Valerien Ismael: "We made too many mistakes today. It was exactly the same situation - we made it too easy for the opponents. Bournemouth have played in the Premier League and when you make mistakes at this level you will be punished. We have to analyse the situation but not over-analyse.

"To make the next step in this league, we have to be clinical, we have to be ruthless. I always say after the game that there's still a long way to go and we have to be focused. We have to give 100 per cent in every game and think about how we can improve."

Bournemouth's Jason Tindall: "It was really pleasing. We needed to respond after a disappointing result against Preston and I felt we did that in really good fashion today. We knew we needed to start quickly because they are a tough side to play against and we knew they held a high line, so we tried to exploit that with some good balls in behind.

"We're a team that believe we are going to score goals. We're very good going forward, have got some very good attacking players but what pleased me tonight was the clean sheet because it's something we knew we needed to get better at."

Bournemouth are next in action on Tuesday, December 8, when they travel to the Liberty Stadium to face Swansea at 7.45pm, while Barnsley host Wycombe at 7.45pm the following evening. Both matches will be available to watch on Sky Sports Football Red Button.