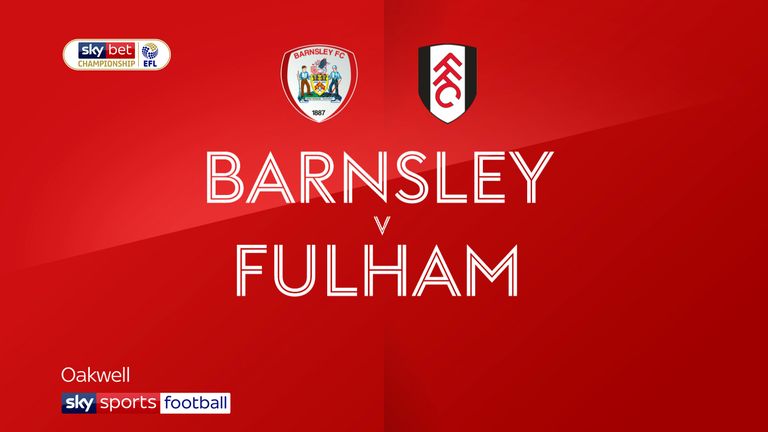 Highlights of the Sky Bet Championship match between Barnsley and Fulham

Relegated Fulham started life back in the Sky Bet Championship with a 1-0 loss at Barnsley thanks to Luke Thomas' brilliant first-half solo goal.

The loss gives Scott Parker plenty to think about as he looks to mastermind an instant return to the top flight.

Tykes boss Daniel Stendel named six new reinforcements in his starting line-up for Barnsley's first match back in the Championship.

Their line-up also included Cauley Woodrow who was facing his old club, with whom he spent seven years.

Parker took charge of his inaugural Championship game and welcomed Wolves loanee Ivan Cavaleiro into the starting XI. Alfie Mawson was deemed fit and started the match against his former club.

A bright Fulham start saw their talisman Aleksandar Mitrovic go close when his right-footed shot curled just over the bar from the edge of the box after some good work from Aboubakar Kamara.

But it was Barnsley who took the lead thanks to a stunning piece of play by debutant Thomas (13) who collected Mike Bahre's pass and skipped past Joe Bryan before calmly slotting under Marcus Bettinelli.

Bahre nearly doubled the lead shortly after, when space opened up for the Barnsley captain allowing him to fire a shot at goal but Bettinelli got down well to save.

Barnsley were on top and looked dangerous on the break. New signing Mallk Wilks powered his way into the Fulham penalty box before laying it off to Bahre whose toe poke trickled wide.

The second half started just as the first ended; Barnsley were on top and nearly stretched their lead when Wilks once again bullied his way into the penalty box but his effort was matched by Bettinelli.

Fulham were starting to get themselves back in the game and nearly equalised through Mawson who jumped highest to meet an inswinging free-kick, but his header was inches wide.

The Cottagers went close again shortly after, this time Cavaleiro weaved a pass through to Tom Cairney who clipped his shot past Sami Radlinger. It was heading towards goal before Mads Andersen's intervention.

Thomas nearly grabbed his second when he raced through the Fulham defence, coolly rounded Bettinelli but saw his shot turned away for a corner.

Summer signing Anthony Knockaert entered the game for Fulham and he was quickly into action, forcing Radlinger to tip his left-footed shot over the bar.

Another away substitute, Floyd Ayite, nearly equalised when Knockaert's cross was palmed away by Radlinger only to find Ayite whose shot was blocked by a sea of Barnsley defenders.

Fulham's search for an equaliser was unsuccessful as newly-promoted Barnsley held onto all three points at Oakwell.

Daniel Stendel: "I'm very happy about the result but more about the performance today. We knew that Fulham have a good squad but if we played with more conviction we had a chance to win this game.

"Most of the time we played really well, Fulham had some chances in the second half, but we deserved to win the game."

Scott Parker: "I'm bitterly disappointed. We knew it was going to be a tough battle in the first game of the season, which it proved to be.

"We started okay in the first 10 minutes of the first half, but Barnsley got a grip of the game and caused us a few problems. We anticipated how fast it would be out of the blocks - they're obviously a very strong side here at home. In the second half we got into the game and we had chances which they defended heroically at times but overall it's very disappointing."