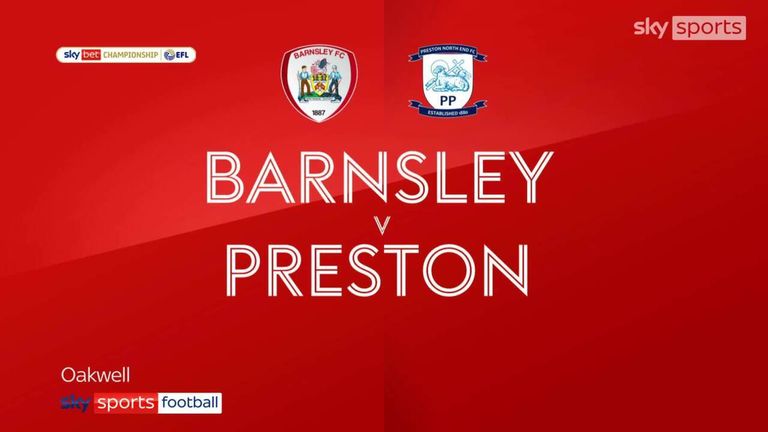 Highlights of the Sky Bet League Championship game between Barnsley and Preston.

Preston beat Barnsley 3-1 in a convincing display at Oakwell.

A brace from Daniel Johnson and a goal from Emil Riis sealed all three points for Ryan Lowe's side despite Aiden Marsh's opener.

Preston had the first shot in the game when Ali McCann found space just inside the penalty area but he rushed his effort and hacked the ball over the bar.

Barnsley took the lead in the 17th minute when Victor Adeboyejo managed to get the ball to the by-line with some excellent skill and pulled the ball back to Marsh, who struck home.

Ben Whiteman tested Jack Walton in the Barnsley goal with a long-range attempt, Walton diving to his right to tip the ball wide.

Preston equalised in the 23rd minute as Riis laid the ball off to Johnson on the left-hand side and the midfielder drilled the ball into the bottom right corner.

Riis attempted to beat Walton at his near post after receiving the ball in the box but Walton dealt with the shot, tipping the ball wide for a corner.

Barnsley came close to regaining the lead when Carlton Morris fired in a shot from the edge of the penalty area but Daniel Iversen in the Preston goal managed to parry the ball away from danger.

Whiteman almost scored a spectacular goal after sweetly striking the ball on the volley from around 20 yards out. His attempt clipped the top of the bar, going behind for a goal kick.

The sides went into half-time with the score 1-1, with Preston having dominated possession while Barnsley managed to spring the occasional counter-attack.

Johnson doubled his tally in the 54th minute to give Preston the lead. Johnson curled the ball across goal with his left foot and the ball bent away from Walton and into the top corner.

Riis should have doubled Preston's lead following a quick counter. The ball was squared across to Riis, sending him one-on-one, but Walton closed him down and blocked his attempt.

However, Riis made up for his earlier error by grabbing Preston's third goal of the game in the 74th minute when he ran onto a long through-ball, rounded the keeper and squeezed the ball into the net from a tight angle.

Substitute Mikey O'Neil had a chance for Preston after drilling a shot from the right-hand side of the box, with his effort going narrowly wide.

Barnsley's Martin Devaney: "I think it was a big improvement from Tuesday [2-0 loss to Blackpool]. There was a reaction from the players, albeit some fresh faces and also giving an opportunity to some of the lads that have not played this season.

"I thought that they dealt with the situation really well. We could have been a little bit better when we won the ball. It's small steps but I think it was a big improvement."

Preston's Ryan Lowe: "We have got a group in there that do respond quite well as you have seen. It's not nice to lose two games, and we don't want it to be three or four. The response was excellent.