Report and highlights from the Sky Bet Championship clash between Barnsley and Sheffield United at Oakwell; Blades were cruising after Lys Mousset double and Ben Osborn strike but hosts hit back to serve up scare in South Yorkshire derby 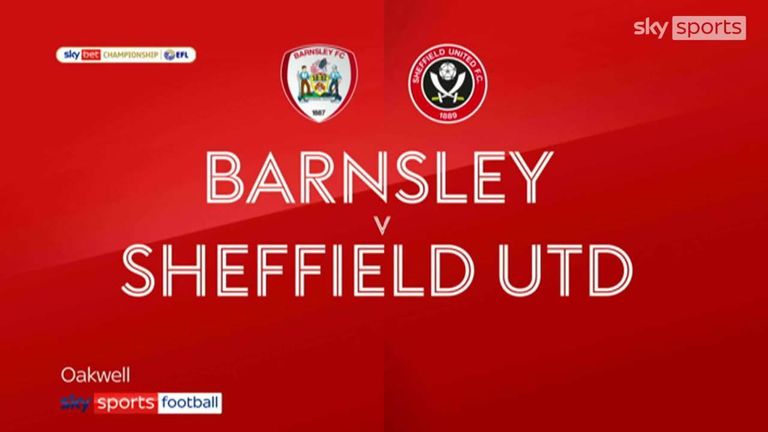 Lys Mousset scored twice but Sheffield United were made to hang on for a nervy 3-2 derby win over Barnsley at Oakwell.

Mousset fired the Blades ahead in the 51st minute, before adding a second just two minutes later, and when Ben Osborn made it 3-0 in the 72nd minute, Slavisa Jokanovic's side looked on course for a comfortable victory.

But Devante Cole pulled a goal back in the 78th minute and fellow substitute Leya Iseka grabbed a second four minutes later to leave the stuttering Blades sweating before closing out a win that lifts them to 14th in the Championship.

How Blades were made to sweat for victory

In a scrappy first half, there was little action in the final third at either end.

Mousset looked the player most likely to score, dragging an early shot wide and also shooting into the side netting.

In the latter stages of the half, Mousset was the first player to put an effort on target, firing straight at Brad Collins from inside the area after meeting a low cross from Iliman Ndiaye.

Barnsley responded with an effort which went close as Victor Adeboyejo's cross picked out Jasper Moon, whose header narrowly missed the target.

Callum Styles then found Adeboyejo who steered the ball goalwards at the near post, but Robin Olsen was able to gather it comfortably.

Cauley Woodrow shot straight at Olsen soon after the restart, while at the other end, George Baldock saw his deflected effort land on the top of the net.

But Mousset finally opened the scoring with a fine finish from the edge of the area after cutting inside and holding off a couple of defenders.

The Frenchman struck again two minutes later, firing into the roof of the net from close range after meeting a low cross from Osborn, who was allowed space down the left-hand side.

Barnsley boss Markus Schopp sent on Iseka in place of Dominik Frieser and then Cole for Adeboyejo, while Mousset made way for Billy Sharp.

The visitors extended their lead when Baldock sent over a low cross from the right that Osborn (72) had time to control the ball before firing beyond Collins, but Barnsley then mounted an unexpected fightback.

Cole (78) pulled a goal back with a thumping shot to give Barnsley hope and four minutes later, Iseka forced his way through in the area before firing past Olsen.

Moon put a header wide in stoppage time but the leveller in a topsy-turvy second half proved elusive as United held on to claim all three points and leave Barnsley with just one win so far this season.

Barnsley manager Markus Schopp: "The reaction after the three-zero was awesome. It is positive. It's a tough one to have a derby and be down three-zero. In games like this, it's so important which team makes the first error and we made two in a couple of minutes.

"This is not the first time - it's an ongoing story that we get beaten too easy. It's again a defeat which is totally unnecessary. It's never easy and I know I am responsible for the situation. I try to find a solution. It's not good enough. It is a tough situation for all of us. I will do everything to prepare the lads in the best possible way for the next game."

Sheff Utd manager Slavisa Jokanovic: "In the last 10 minutes or so, what happened is not acceptable. We started to panic and we started thinking we cannot win the game. In this kind of moment, you need to be calm and try to finish the game in a better shape.

"We won a local derby in front of a lot of our supporters and in this part I am happy, but it was a really hard 10 minutes for us. We gave them oxygen for them to find something positive and in football that is not acceptable.

"I am happy with the three points but if you don't improve this kind of the game, it can be really, really expensive for us."