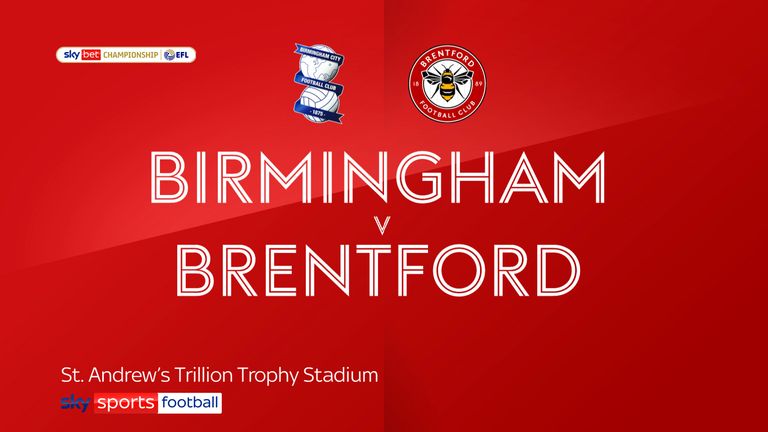 Brentford fell to a 1-0 opening-day defeat to Birmingham for the second season running as a Jeremie Bela header settled proceedings at St Andrew's on Saturday lunchtime.

Thomas Frank's beaten play-off finalists had the better of the chances in the first half but fell behind before the break, when Bela was left unmarked to glance in Ivan Sanchez's corner at the near post (37).

An improvised effort from Brentford's Sergi Canos rattled the crossbar midway through the second half, but, despite the Bees' growing influence in the game, Aitor Karanka's men - organised by the impressive George Friend - batted away everything their opponents threw at them on the way to a first league win since February 11.

Although wary of a repeat of last season's opener - which Birmingham edged at Griffin Park with their only shot on target - the visitors had Luke Daniels to thank for keeping the score level after just a matter of minutes, when the goalkeeper superbly pushed a shot from Bela around the post after smart work from Friend on the edge of the area.

Neither goalkeeper was meaningfully tested for the remainder of the first half, although Birmingham debutant Zach Jeacock was fortunate not to concede when England U21 midfielder Josh Dasilva clattered a shot off the far post just a few moments before Bryan Mbeumo raced onto a loose clearance from Harlee Dean and blazed over the crossbar.

Eight minutes before the break, though, Brentford's resolve was broken. A corner conceded by Christian Norgaard - named man of the match on his Denmark debut against England in midweek - was delivered by Sanchez and nodded home by Bela after the Frenchman had ghosted into the six-yard box.

It is no exaggeration to suggest the Blues' goal lived a charmed life as Brentford applied the pressure after the break. Canos' improvised effort had Jeacock beaten all ends up before the ball hit the bar, while Emiliano and Ivan Toney both passed up chances during a hectic goalmouth scramble.

Shortly afterwards, Pontus Jansson was denied a penalty after being robustly hauled to the deck by Kristian Pedersen but, despite their increasing influence, Brentford failed to take anything from a frustrating game.

Man of the match - George Friend

With the fourth-worst defensive record in the division last season the Blues needed reinforcements this summer and in Friend, they appear to have struck gold.

The 32-year-old, who left Middlesbrough in the summer, was instrumental in keeping Brentford's new look frontline quiet at St Andrew's and should prove to be a valuable asset for Karanka both on and off the pitch.

Birmingham head coach Aitor Karanka on rookie goalkeeper Zach Jeacock: "I met Zach one month ago and he is calm and confident. Even if he is nervous, you can't feel it. Neil (Etheridge) arrived (on Friday) and didn't know his team-mates. (Jeacock) is on the pitch like he is on the training ground, and he has a very bright future."

Brentford manager Thomas Frank: "We were patient and quick enough to produce enough crosses, we were dangerous at set-pieces and we definitely should have got the equaliser. So 100 per cent we deserved to win. But if we play like that, we will win more than we will lose."

Birmingham are back in action on Saturday September 19, when they travel to the Liberty Stadium to face Swansea, while Brentford have just a few days' break before they take on Southampton at St Mary's in the Carabao Cup on Wednesday September 16.