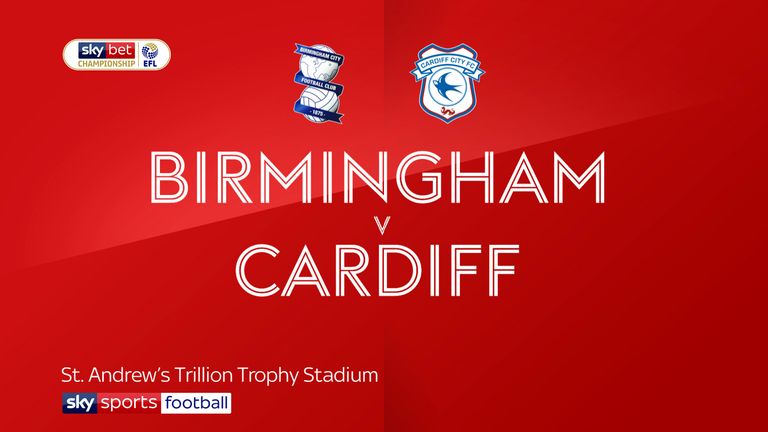 Highlights of the Sky Bet Championship match between Birmingham and Cardiff

Midfielder Jude Bellingham gave Blues a fourth-minute lead and Pep Clotet's side went on to dominate the rest of the half, Jeremie Bela hitting the bar and Bellingham denied by goalkeeper Alex Smithies.

But they really needed to make their supremacy count when they were on top, because they were punished for it in the second half.

Lee Tomlin deservedly levelled in the 63rd minute after he had also had an effort ruled out for offside.

Cardiff had a penalty shout waved aside while Joe Bennett fired inches wide as the Welshmen held sway after the break.

But Lukas Jutkiewicz could have snatched victory for Blues only to be denied by Smithies.

The result left Blues 18th, nine points above the relegation zone, but they have now won just two of their last 14 Championship games, a run which started with a 4-2 defeat at Cardiff on November 2. Cardiff are 13th, five points below the play-off zone.

The hosts dominated the first half after taking the lead with the first attack. Dan Crowley's corner was turned on at the near post by Bela and Bellingham stabbed home his fourth goal of the season.

Blues went close to a second goal when Bela let fly from the corner of the box, but his thunderous effort rattled the top of the crossbar and sailed over.

Bellingham was denied his and Blues' second on the half hour. Kerim Mrabti pumped in a long ball, Jutkiewicz headed down and the 16-year-old midfielder's instant volley was superbly pushed around the post by Smithies.

Blues had another chance just before half-time when Crowley put Mrabti through, but the Swedish forward finished weakly.

Cardiff fans, understandably unhappy with the first-half performance, booed their side off at half-time, singing 'Harris, Harris, sort it out' to their manager.

It was a different story after the break however, with Tomlin at the heart of their best work.

The 31-year-old attacking midfielder had an effort disallowed for offside on 48 before his angled shot was blocked by Jutkiewicz.

Tomlin then appeared to have a penalty shout when he tumbled under a challenge by Marc Roberts, but referee Andy Davies was unmoved.

But Tomlin was not finished and he headed home his fifth goal of the season in the 63rd minute from Marlon Pack's inswinging corner, missed by Blues goalkeeper Lee Camp who had come to punch clear.

Cardiff continued to force Blues back and left back Bennett was a whisker away from giving the visitors the lead with a first-time shot from the edge of the box that flew just wide.

Out of the blue, the home side broke and Jutkiewicz's downward header was tipped away by Smithies at full stretch from Ivan Sunjic's searching ball.

In an end to end finish, Cardiff substitute Callum Paterson's shot on the turn was smothered by Camp.

Birmingham's Pep Clotet: "I do have the feeling Jude will stay. He is very happy here and he knows it's one of the right steps for his progression. He has played more than 20 games for us and that has a value.

"Because I am not the manager, in my position as head coach, it is difficult to evaluate. He has been watched since he was 13 or 14. For the Middlesbrough game, half of Europe was here. He is used to it. Jude is very focused on his job and I have never seen him distracted.

Cardiff's Neil Harris: "At the time I thought it was a penalty. When you've got their player saying 'We got away with that one, the ref's had a disaster there', you know it's a penalty.

"I spoke to the referee straight after the game and he said he thought Lee left his leg in there, so contact was our player's fault. So it's not up to Lee to get his legs out of the way - if there's contact, it's a foul."