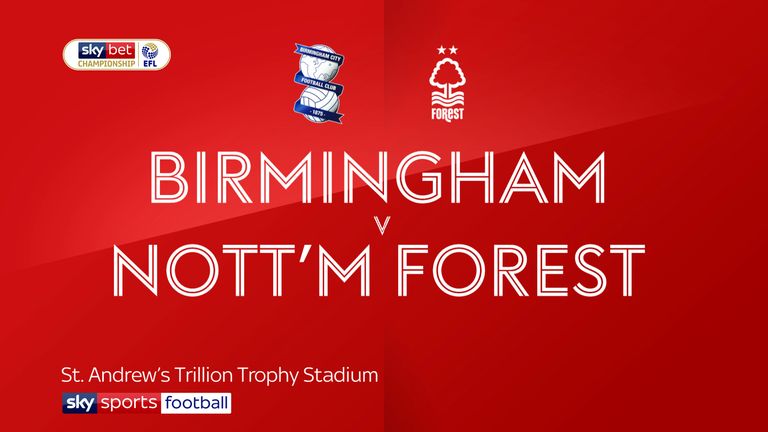 Goals in either half from Scott Hogan and Kristian Pedersen gave Birmingham a 2-1 victory over promotion-chasing Nottingham Forest.

Hogan, who joined on loan from rivals Aston Villa earlier this week, marked his debut with a first-half strike to cancel out Tiago Silva's opener.

An eventful first half produced two goals, a penalty save and a banner protesting at the Birmingham ownership.

That was unfurled in the 18th minute shortly after Blues had fallen behind to Tiago Silva's opener.

The hosts lost possession in their own half and broke to Joe Lolley. The Forest attacker spread play to his left where he found Silva, with the Portuguese midfielder firing a rising shot into the roof of Lee Camp's net.

A section of home supporters at the opposite end of the ground responded by revealing a sign which said 'Killing the club. Get Dong out now'.

Things could have got even worse in the 40th minute when the hosts conceded a penalty as Adam Yates tangled with Pedersen.

Lewis Grabban stepped up and placed a weak effort to Camp's left only to see the veteran beat the ball away.

The winger checked on to his left foot and picked out Lukas Jutkiewicz beyond the far post and he headed back into the middle for Hogan to caress home from close range.

Forest resumed their pressure on the home goal in the second half and six minutes in hit the crossbar.

A ball into the Blues box deflected off a Forest player and found Grabban seven yards out and with Blues claiming offside, the striker hooked his shot on to the woodwork.

Just after the hour, Birmingham conceded a corner which was lifted to the back by Silva, headed into the middle by Joe Worrall and once more to Grabban. This time, the 32-year-old found the target but Harlee Dean was on the line to block.

Forest paid for their profligacy in the 74th minute when Bela's corner caused a melee in their box. With Brice Samba unable to claim the loose ball, Pedersen slid it over the line.

Birmingham's Pep Clotet: "The only penalty I saw today was a clear handball from Nottingham Forest in their own box. But I think if they would have scored that penalty the game would have been very difficult for us.

"I haven't got a clue what it was awarded for. For our part it looks like it was a handball, but the only one who touched the ball there was Campy. That lifted us back into the game and Scott's goal after that put us back even, fully deserved."

Nottingham Forest's Sabri Lamouchi: "We were so stupid, so naive to give the game when you start the way we started. I don't want to find excuses. Wind, referee, opponent, Samba Sow (injury), transfer window, club, fans - come on. It's just our fault. We need to accept and stop.

"Had Lewis scored, the game would have been over, absolutely, but this can happen. But you are still winning 1-0, so stay in the game, don't give anything. Birmingham came back but before they equalised my feeling was we gave them confidence. Just our fault."