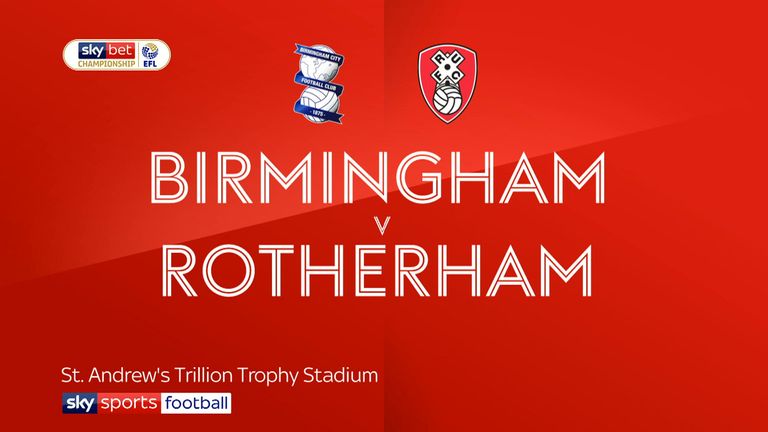 Highlights of the Sky Bet Championship match between Birmingham and Rotherham

Birmingham chalked up their first home win of the season, at the sixth attempt, with a convincing 3-1 success over Rotherham.

They were again indebted to the goalscoring form of striker Lukas Jutkiewicz, who sent Rotherham spinning to defeat with his first hat-trick for Blues - including two first-half goals in the space of three minutes - to take his impressive tally to five in his last two games.

Birmingham, the Championship draw specialists, increased their unbeaten record to eight games - currently the best run of any club in the Sky Bet Championship this season.

Rotherham are still pointless from seven games on their travels, although they did manage to score for the first time in their last five away outings.

The result was a relief for Birmingham, who could be hit with a 12-point deduction by the English Football League after allegedly breaking Financial Fair Play rules.

With Maikel Kieftenbeld in the Birmingham side after having his red card rescinded, and manager Garry Monk forced to watch from the stand following a touchline ban, the Midlands club made a somewhat inconsistent start.

The Millers were more spirited and attempted to take the game to Birmingham, with Ryan Williams showing up well on several occasions. But often it was an isolated threat and there was no serious danger to their rearguard, which did much to explain Rotherham's miserable away record this season.

There was some energetic work by Rotherham's midfield as they contained their opponents early on but disaster struck in the 20th minute as a result of a bad goalkeeping error on the part of Marek Rodak.

A high corner from Jota drifted over the packed goalmouth to the waiting Jutkiewicz, who produced a high header to the near post where Rodak fumbled the ball into the net.

Rodak was again struggling three minutes later when he failed to gather a low shot by Gary Gardner. The ball ran loose to Jutkiewicz, who was on hand to bundle his effort home from close range.

Rotherham's response was a fine effort from Michael Smith and an equally fine save by Lee Camp to keep the Millers off the scoresheet despite some spirited play.

The visitors drafted in Kyle Vassell early in the second period in an effort to inject more attacking power, while Birmingham strived to find some attacking rhythm.

Birmingham sealed their belated victory with an excellently worked free-kick in the 68th minute on the edge of the penalty area. Jota nudged the ball a yard back to Jacques Maghoma, who slid his pass into the path of Jutkiewicz to hammer a raking drive to the right of Rodak.

A consolation effort from Jon Taylor, who converted a cross from the left, in the 77th minute finally enabled Rotherham to end their bleak goalscoring away record.

Garry Monk: "We are delighted for him [Lukas Jutkiewicz]. He was clinical and things went our way. Lukas has an incredible work rate and we try to play to his strengths. He does this every match. He gets into the right positions and he deserves his goals.

"We have never doubted ourselves -this can be seen from all our performances. The game against Rotherham was lower in terms of performance but it was solid. It was what was needed and it was good we were clinical with our finishing."

Paul Warne: "Their third goal killed us off. We kept going and the way we play, we are a difficult team to play against, but we were not our best on this occasion. I just think in the first half hour we moved the ball too slowly and tried to be too precise.

"Obviously it is massively important to pick up some away points. The lads have been excellent at home and if we had been excellent against Birmingham we would have collected some points for the bus trip home. Collectively I think the game was one too much for us and there were not enough of my players at their best."